The Hokies are searching for ways to wash away the taste of a demoralizing loss to Wake Forest. 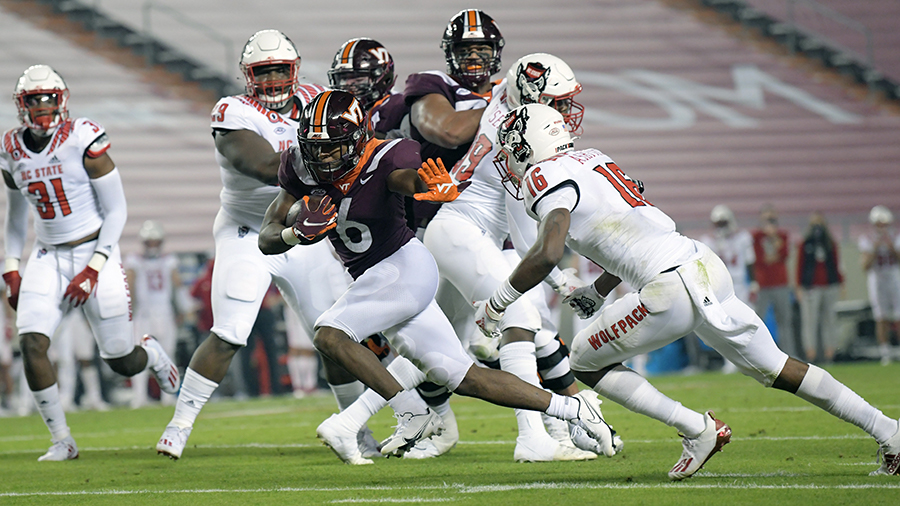 RB Raheem Blackshear is among the players hoping for an improvement against Louisville. [Virginia Tech Athletics]

The bad news for Justin Fuente's teams is they have plenty of experience losing in games where they were heavily favored. The small bit of good news is they're also adept at bouncing back.

Saturday's loss to Wake Forest was nothing terribly new for the Hokies during Fuente's tenure — since arriving in Blacksburg, he's lost five times now when Tech was ranked and its opponents weren't. And many of those losses have been painful, too, like last year's loss to UVA, or the 2016 loss to Syracuse when Jerod Evans had the Hokies riding high.

But, much like Frank Beamer's teams of old, Fuente has found a way to rally his squads in the past: he's 12-4 after a regular season loss.

Consider that he followed up that loss to the Orange with a drubbing of Miami in a big Thursday night game. And more recently, the Hokies followed up last year's crushing home loss to Duke with another win against the Canes. Similarly, the team turned a close loss to Notre Dame into a three-game winning streak.

And after a dispiriting road loss in Winston-Salem, Fuente's team is counting on finding more of that resiliency against Louisville.

Gallo said Fuente has been relaying that message to the team consistently lately, including in one unusual setting: an informal book club organized by the head Hokie himself. Gallo says participation is purely voluntary, where some players have been reading the self-help book "The Hardest Path" and discussing it with the coaches.

"We were all bored and had nothing to do, so why not?" Gallo said.

That might be a light-hearted distraction from quarantine's demands on the team, but Fuente is hoping it conveys a meaningful message. Even in this unusual season, the Hokies are trying not to lose focus.

That's not to say the coaches didn't have any suggestions for the offense, in particular, after the group managed just a single touchdown against the Demon Deacons.

"Coach (Jafar) Williams, he got on us," Turner said. "We knew what we were going to be getting on Sunday, because obviously the passing game wasn't where it was supposed to be."

While most of the criticism centered on QB Hendon Hooker and his trio of interceptions, Turner said the team's receivers accepted plenty of the blame for the poor passing performance as well. Chiefly, he said "we have to get separation on our routes" and "we have to make contested catches," a pair of principles that start at the snap.

"It's about being physical," Turner said. "Who wants to be more physical coming off the line?...You've got to know how to get open and if you can't, of course, the pass isn't going to work."

It wasn't all bad on offense, of course. Hooker managed more than 100 yards on the ground, with the team totaling 239 rushing yards in all. Both Khalil Herbert and Raheem Blackshear got involved in the passing game, with Blackshear, in particular feeling like he was become more comfortable catching jump passes over the middle of the field. Blackshear took one pass for 19 yards, and he said his dad (a former college player himself at Texas Tech) thought he had the chance to take the next catch to the house if he improves his technique.

"He just said I need to open my legs up more, in order to make that man miss, and I should be off to the races," Blackshear said.

The Hokies will have their chance to put those changes to the test against Louisville's defense, which has logged two strong performances in back-to-back weeks. The Cardinals may only rank in the middle of the pack when it comes to yards allowed, but after allowing just 12 points to Notre Dame and 16 points to Florida State, Blackshear is expecting a challenge.

"They're a very move-around type of defense, which is very confusing for a lot of people," Blackshear said. "The line is going to have to bring their A game."

By contrast, Louisville's offense has slowed down after a fast start to the season, though it did put up 48 points against FSU. And WR Tutu Atwell will provide a coverage challenge as well, with CB Brion Murray dubbing him "kind of small, but overall a great receiver."

"Our whole unit is looking forward to this," Murray said.

I honestly have no clue what to expect anymore from this team, absolutely destroying a team or getting destroyed seems equally likely. I do like that 75% winning percentage after a loss, since we are a tech school I will lean on the side of math. Or maybe we can they can all show up in costumes and scare the cardinals so they play really badly to give ourselves an edge?

Are those costumes going to be football uniforms this week? Unlike last week?

I expect us to break a few tendencies and win convincingly this week.

If I was Fuente, I would simply make my tendency winning convincingly.

I would love to say I thought we were going to win this week but with this many games under our belt, I have zero faith in this year's defense anymore. They just aren't going to win games. We have to have the offense score a ton of points to have any chance of winning. If they don't like last week, it is going to be ugly.

On TTL Monday night, CJF summed up Louisville: "Speed, speed, speed..." That sounds like a bad matchup to us, frankly, especially at the 2nd level on D. We will need to do things on both sides of the ball to negate their speed.

I'm not afraid but I have my doubts; right now I would rate us at 3 Spurtles and Louisville at 3.5 Spurtles (out of 5).

I think I would agree with your rankings, but maybe give them a half TacRazor on top of their 3.5 spurtles

As despondent as we may feel after last week, articles like these that show the attitude of the team really demonstrate how twitter magnifies the doom and gloom. Glad the players are focused on the task at hand and going 1-0!

The game sets up like a shoot out to me. I think Louisville's QB will give our front 7 fits, and I think the only way we stay in it is to try to score a bunch of points- which is possible against the louisville defense. My big concern is that there is tape on Herbert and our WRs now- so folks will gameplan accordingly- and make our WRs beat them.

The game sets up like a shoot out to me.... and I think the only way we stay in it is to try to score a bunch of points- which is possible against the louisville defense.

I think this is what we all thought last week too. I'm to the point that I don't know what to expect but my W/L expectations aren't very high 😕

Good Guys in a blowout. Its easy science.

The bad news is, my expectations are shattered. The good news is, the Hokies are going to be playing some football and nothing else compares to the excitement of watching my favorite team no matter how much it hurt last time. We gonna have food, we gonna have drinks. Its gonna be a good time.