Cornelsen, Hamilton Bullish on Virginia Tech's Depth on Both Sides of the Ball in 2021

With some key contributors deciding to return after a Covid-disrupted season, Tech's top assistants are optimistic. 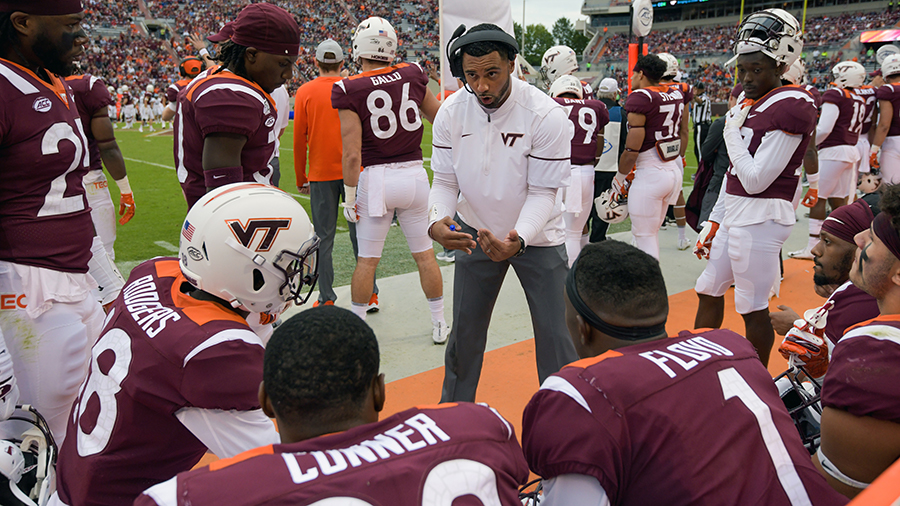 DC Justin Hamilton is bullish on the team's depth heading into 2021. [Mark Umansky]

Justin Fuente said last week that he believed the team's depth should give fans reasons for optimism about the 2021 season. Clearly, he's been listening to his coordinators.

In a rare press conference with the team's top offensive and defensive assistants, Brad Cornelsen and Justin Hamilton laid out what they see as Tech's depth advantage headed into the new year. There are some positions with big open questions, of course — perhaps offensive tackle chief among them — but others are suddenly well stocked with experienced players.

The Hokies are certainly losing some big contributors this offseason, but others have chosen to return and bolstered the team's bench. Hamilton was particularly pleased to see DT Da'Shaun Crawford and DE Emmanuel Belmar both sign up for another season, while Cornelsen said that the news that WR/TE James Mitchell was coming back was "almost like getting a new player."

Then there are the transfers the team added in the offseason. Hamilton pointed out that both S Tae Daley, late of Vanderbilt, and DT Jordan Williams, formerly of Clemson, will instantly bring a veteran's confidence to those position rooms.

He expects that Williams, a highly rated recruit with a history at one of Tech's ACC rivals, will make a particular difference right away.

"We were actually bowling a couple weekends ago with some younger guys, and I pointed to them and said, 'Remember when that was you?'" Hamilton told reporters Wednesday. "He was just low key about it, gave a small grin and was like 'Yeah.' But he's going to get respect from teammates when he shows how he works and prepares...It's just extremely important to have that veteran presence."

Cornelsen hopes that Texas A&M transfer Connor Blumrick can do the same at quarterback. While the OC said that Braxton Burmeister is the "clear cut" starter at the position right now, given his experience in the starting role last year, Cornelsen still wants Blumrick to compete for the job.