In a game plagued by self-inflicted wounds, Virginia Tech’s shocking loss to Old Dominion is a sobering reminder of how far the program has to go. 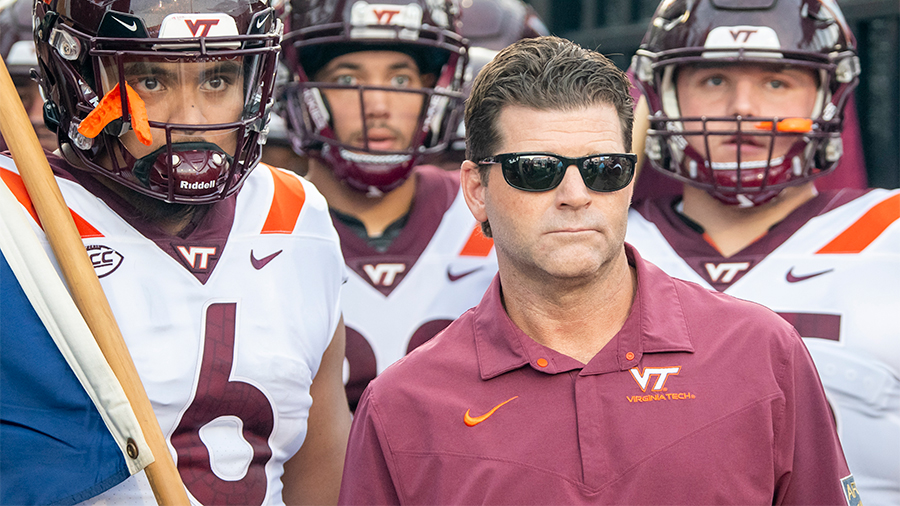 For the second time in five seasons, Virginia Tech lost to Old Dominion. The swirling optimism of the Brent Pry era came crashing to a halt on Friday evening in Norfolk, as ODU quarterback Hayden Wolff engineered a nine-play, 74-yard touchdown drive in the waning moments of the game to give the Monarchs a 20-17 lead. The Monarchs' defense stood tall on the final possession to seal the victory.

Looking at the box score, you would think Tech won handily. ODU averaged 3.7 yards per play. Wolff completed 40% of his passes. The Monarchs had one drive all game that went more than 50 yards. But it was the most important drive of the game.

Unlike the debacle in 2018 — a 49-35 Virginia Tech loss — this game did not feature a Herculean quarterback performance, or spectacular playmaking from future NFL players. The Hokies were not fielding a defense that was overwhelmed and out of position. They shot themselves in the foot with penalties, turnovers, and special teams mishaps. Everything that could go wrong did go wrong. Virginia Tech handed this win to Old Dominion, and the home team happily obliged.

Where does Tech go from here? It is, after all, just one game. Most Hokie fans knew this team was in for a lengthy rebuild. But losses — especially one of this magnitude — are much harder to swallow in the moment. If you thought that the road to respectability would be nice and breezy, the results of last week will serve as a humbling reality check.

Over the offseason, there was a growing sense of optimism among Virginia Tech fans that this new coaching staff was different. Several of them came from respected Power Five programs, and had decades of coaching experience between them. A common refrain went something like this: if Tech can go .500 with Justin Fuente's underachieving staff, who is to say they can't win seven or even eight games with better coaching?

I was skeptical of this line of thinking for a couple reasons. First, the coaches are largely new to their roles. There is a first-time head coach in Pry, calling defensive plays on behalf of his first-time defensive coordinator Chris Marve. There is a fairly green offensive coordinator in Tyler Bowen, whose only prior O.C. experience at the FBS level was in a shared role at Penn State in 2020, and a new, albeit veteran, offensive line coach in Joe Rudolph. These coaches are also trying to install a new scheme and clean up sloppy technique within a single offseason. There was every reason to believe there would be some growing pains.