Homefield Deal of the Month: 10% off Vintage Virginia Tech Apparel

Disclosure: This is a paid post sponsored by Homefield. 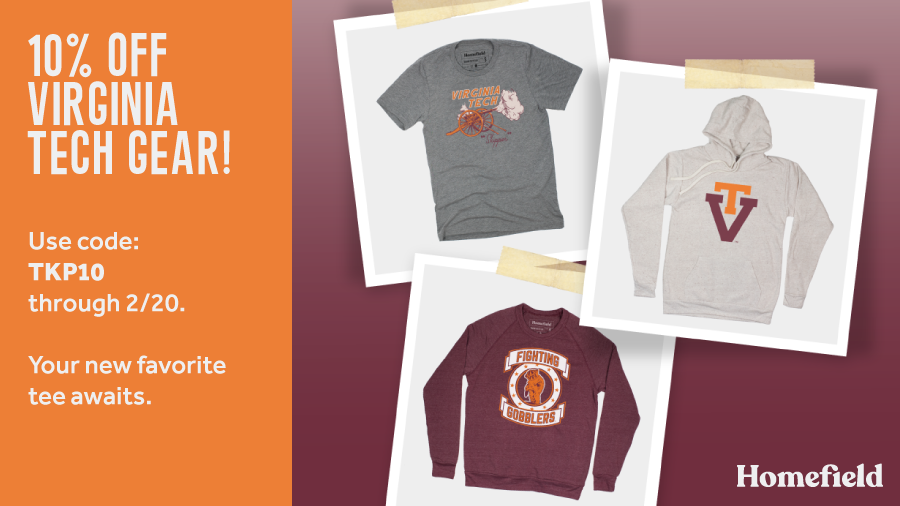 Have you ever wondered how the Virginia Tech Gobblers became the Hokies?

As you may know, Virginia Tech's athletic nickname was the Gobblers. Some say that they were called this because of the way the student athletes gobbled up their food. As years passed the name fell out of favor and a new bird mascot appeared: The HokieBird. Sketched by student George Wills, the HokieBird symbolizes the power and strength of Virginia Tech athletics.

Represent your Hokies by wearing some of Homefield's Vintage Virginia Tech gear. If you're old school, we've got you covered with Gobbler's gear that will not disappoint.

This stuff is so unbelievably comfortable. That is all.

I bought the old school VT hoodie in the picture, one of the softest sweatshirts I have, crazy comfortable.

Nice! Just ordered two of the vintage hoodies for me and Mrs Mas Scott. I designed the old skool V over T logo into her engagement ring so that's kind of our thing

I have only tried their Tee shirts, but they are unbelievably lightweight and comfortable. So far they are holding up as well!

I am not sure there is a more perfect fit than the XL after one wash.

My only complaint with these is that the draw strings on the hoodie are comically long. Pretty sure I dipped one in dog poo the other day while bending over to bag it up. Other than that these products are awesome and very comfortable. I have the T over V logo hoodie and two of the vintage fighting gobbler tee's.

Oh, one other complaint. I bought these items two weeks too soon to get the 10% discount!

Your TKPC membership give you 10% off all the time! Check TKPC page for the code.

So I blew it. Guess I'll just have to order more stuff!

I'm hoping they'll come out with the VT joggers, I have the skipper shirt and it is incredibly comfortable

Yeah Im planning on buying the generic ones when they come back in stock, but based on how quickly they sold out of all of them it seems like it wouldn't be a bad idea to starting adding more team logos to them.

I got the 2nd order of Doggers because they're hilarious. If they come out with VT joggers I'll lose my damn mind

I am currently wearing my first edition doggers and they are the perfect nap pants.

Confession: I went to JMU and they had some solid JMU gear but also got the wife a VT crewneck. Coupon code worked for all items!

Has anyone seen a place that sells Hokie stone for above a door like what's at the end of our tunnel?