Hand Down, Man Down

The Hokies were physically outclassed by the Clemson Tigers, squandering yet another opportunity to solidify their postseason resume. Though a rematch looms in the ACC Tournament and the Hokies need a win to kickstart any dancing discussion. 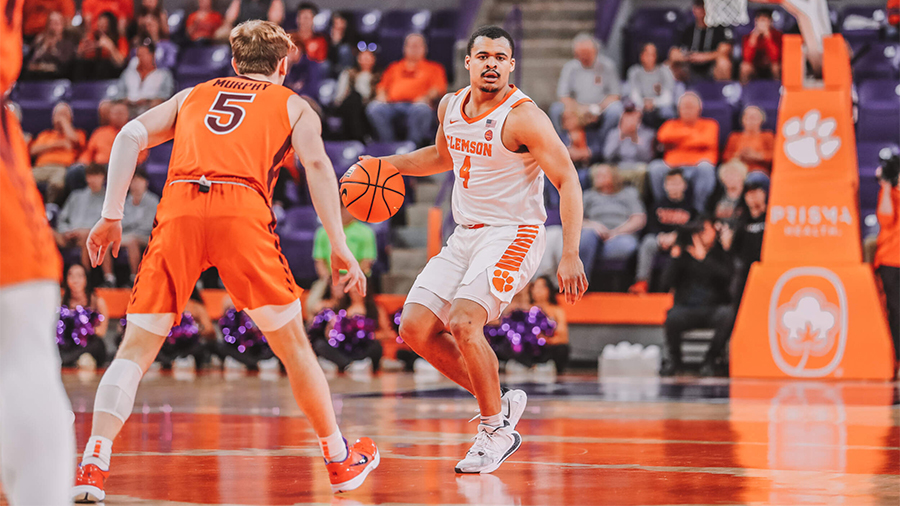 The story of the 2021-22 Virginia Tech Hokies will be defined by missed opportunity.

Virginia Tech let another winnable game slip away on Saturday, falling to Clemson 63-59 in the regular season finale. They were out-hustled and out-executed. They lost the turnover battle and the shooting battle. Most importantly, the Hokies lost the forward battle, as Clemson big man P.J. Hall scored a team-high 12 points in his return from injury while playing stellar defense on Keve Aluma. Virginia Tech's Second Team All-ACC forward scored only seven points, well below his season average of 15.

It was never sustainable for Tech to win almost every game that they played. As weak as the ACC may be, there are still special players in this league, and to win at such a high level requires an incredible amount of talent and focus that this team does not possess. The consequences of this loss are the result of the Hokies' inability to win games earlier in the season. Their January — not their March — will be what costs them a shot at the NCAA Tournament.

One thing Clemson did really well was using physicality to their advantage. This was probably the most physical opponent Virginia Tech has played all year, and the Hokies were not up to the task, scoring 59 points on 61 possessions in one of their least-efficient offensive games of the season.

While I credit the Tigers for identifying a style of play conducive to success and executing their gameplan, the officials let them get away with too much contact.

On this possession, Aluma (#22) tries to set a pindown for Nahiem Alleyne (#4) to get an open look for a three. Except he doesn't, because David Collins (#13) runs right through him, a blatantly obvious foul that went uncalled, much to the frustration of Mike Young. Now the play goes off-script, and Justyn Mutts (#25) was forced to make something happen. He drives on P.J. Hall (#24), who displays good footwork to stay in front of the ball, forcing a travel.

Clemson did a good job of fighting hard through screens and disrupting the actions that Tech wanted to execute. Because the Hokies do not have anyone (sans Sean Pedulla) who can score when plays break down, they are highly reliant on set plays, so if you take that part of their game away, your odds of winning increase dramatically.

Virginia Tech also wants to initiate their offense through the post, and Clemson game-planned to take that away. The Hokies took an absurd 59% of their FGA from three, which is high even by their standards. While the looks weren't terrible, three-point shooting is a high-risk, high-reward strategy: some nights it's there, and some nights it isn't. On this particular day, it wasn't there, as the Hokies shot 30% from behind the arc, losing 21 possessions to missed threes.

Virginia Tech's offense has had very good spacing as a result of their perimeter shooting, but Clemson made an effort to protect the paint and live with the results.

Note how after the dribble handoff to Mutts, all three of the Tigers' guards sagged off the three-point line — that's six eyes focused on the paint. Hunter Tyson (#5) leaves Aluma and goes for the steal. Mutts maintains possession and then telegraphs a bounce pass to Aluma under the rim, but Collins swipes it away as he is shaded towards the basket and reads the pass perfectly. I don't blame Mutts for trying to make this pass as it was a high-percentage opportunity; sometimes, the defense just executes better.

Virginia Tech now ranks dead last in ACC play in free throw rate while simultaneously ranking first in three-point attempt rate. I think it's fair to say that the Hokies' offense is way too reliant on threes. North Carolina and Wake Forest are their two most comparable opponents in terms of efficiency, and both get to the line way more with similar shooting splits; their win-loss records are reflective of greater balance. To me, this is more of a talent issue than a scheme issue — there's only so much you can do when you have almost no physical drivers of the basketball. Getting high-percentage looks from three off creative actions makes the most sense based on Tech's personnel.

Still, it does not lessen the frustration of watching this team fade down the stretch over and over again. Of Tech's last 10 FGA, eight were three-pointers. Only one went down. This is not the ideal formula for grinding out road wins in hostile environments.

In fairness, the Hokies tried to get the ball to Aluma in the post, but Clemson was having none of that.

Darius Maddox (#13) attempts to deliver an entry pass to Aluma, but the Tigers were ready for it with multiple defenders prepared to help from the weak side. Instead, the ball swings to Mutts, and Hall was perfectly content to let him shoot from three. (Mutts did make an open three earlier, but Clemson stuck with playing the percentages.) He knew the shot was off from the moment he released it.

Last week, I looked at past teams that were comparable to Virginia Tech in the KenPom rankings. This week, I will do the same thing using the NET rankings and quadrant wins, seeing as it forms the basis for how the committee evaluates team quality.

Unfortunately, the NET rankings have only been in use for two tournaments so it's hard to draw super meaningful conclusions from the limited data. Within that sample, I looked at teams whose NET ranking fell between 30th and 50th, and who had fewer than two Quadrant I victories. Last season, the two teams that matched this description — Syracuse and Drake — both went dancing. The Orange even did so with seven losses against Quadrant I teams. However, those squads went a combined 11-1 vs. Quadrant II teams; the Hokies are a much more pedestrian 4-5. On the other hand, both Clemson and Furman were left out of the tournament in 2019 having fit that description, owing perhaps to their losing record against top-tier competition. Of these four teams mentioned, only Syracuse went dancing with a sub-.500 mark in Quadrant I and II games.

All of this is a long-winded way of saying that Virginia Tech has only two realistic paths to make the Big Dance. The first is for Mike Young to legally change his name to Jim Boeheim. Assuming that strategy does not pay dividends, the second is to take care of business against Clemson in the first round of the ACC Tournament, and then beat Notre Dame. Getting that second Quadrant I win will be a big boost: of the 13 teams to finish in the 30-50 range in NET with two Quadrant I victories, eight went dancing (63%). Virginia Tech can put themselves in that camp with a win over the Fighting Irish.

(It should also be noted that on a neutral court, a Quadrant I victory includes teams ranked 1-50 in the NET. Notre Dame is currently ranked 50th. To say that Tech's postseason odds are hanging in the balance is putting it lightly.)

Whatever the outcome, should Tech fall short of an ACC championship, I will not stress out on Selection Sunday. If they are left outside the bubble, I will not scream to my television set that they got "snubbed" or "hosed", that the committee doesn't value efficiency enough, that Virginia Tech isn't respected by the media. I cannot do so for a team that consistently wilted away late in games, with dreadful losses to Boston College and N.C. State, and a drubbing at the hands of Wake Forest. A team that had to concoct a historic turnaround just to finish barely-above-.500 in one of the worst seasons for a major conference in the last 20 years.

I get where the advanced-numbers advocates are coming from (and believe me, I'm one of them — this team is better than they showed). But at some point, the results have to matter, and Tech's resume is about as thin as soggy paper. The great thing about college basketball is that the 30-game slog of a regular season provides ample opportunities for the cream to rise to the top. The Hokies had those opportunities, and failed to capitalize on them; such is life. If the words "Virginia Tech is headed back to the dance!" do not ring from the mouth of Greg Gumbel on Sunday afternoon, I will be content knowing that in the end, this group gave it their all, and their all just wasn't quite good enough. They left their chances to fate, and have no one but themselves to blame.

But given the infinite possibilities that exist in the magical month of March, I hope we have not seen the last of the Hokies in Brooklyn.

I felt much better about our chances of beating Clemson in the last game than I do in the tournament.

If we get officials who don't swallow their whistles, I think we have a good chance. We were manhandled at their place and only lost by 4. This is on a neutral court after Clemson played last night. I think Catoor goes off tonight and we win.

You wonder how this Clemson squad lost a game this year. Not like Brownell is getting fired or anything. I hope we can find a way to beat such a great squad.

I don't know if this would be an option, but I would play Maddox at the 4 and rotate Aluma and Mutts at the 5. That makes PJ Hall have to guard the perimeter, which he sucks at.

Teams that rely on the 3 struggle in tournaments as their legs fatigue. It throws off the shot and next thing you know nothing is falling. My hopes are not high, already hoping for NIT 1 seed.

Georgia fucking Tech won this tournament last year. Syracuse made a run a couple years ago to get themselves off the bubble. Find a way.

I guess you are right, but I have not seen anything from this team that makes me think they have it in them. Maybe they are saving the best for last?

The team has a longer ACC win streak (including games on the road) than it takes to win the ACC tournament. They have already beat all of the potential opponents other than UNC and Duke - some on the road. The potential is absolutely there. If nothing else, getting hot from three for a few games as the team did in mid- February will give them an incredible chance to win.

We can def beat ND again and have a good shot at Carolina in game #3. Only one we might not be able to win would be Duke in the final, but don't worry about that too much. L owns K