The Hokies capped off 4-straight wins in Brooklyn with an ACC Championship and automatic bid to the NCAA Tournament. 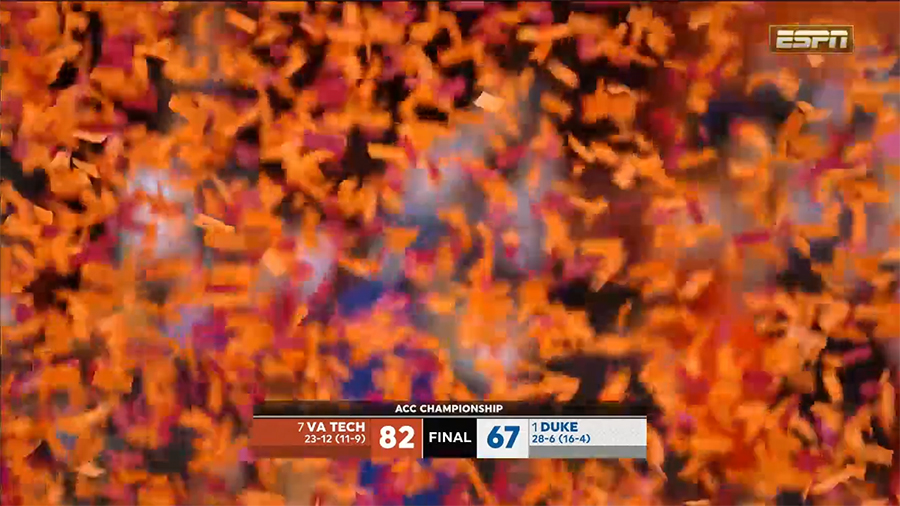 You can hear it.

The conversation with my gf after going through this giftory...

I'm told Duke's starting five are all potential first round picks. Cattoor ate their lunch seemingly without breaking a sweat. Maybe he should be the lottery pick instead.

After Saturday night, it really is time for K to retire. I know he is a 2 seed and VT was hot, but not forcing Young to choose between Williams, Moore and Banchero inside was asinine. 1992 coach K would have won that game by 10 points, not matter how hot Catoor was. K has lost some of his fastball. Moore is a huge mis match for VT, and K ignored it. Roach is good enough from 3 where young couldn't cheat on him. Terrible job by K regarding matchups

Coach K is still an awesome coach and added a huge amount to the games, but his time is done. Hopefully, CMY will take the reins as the "Coach to make you great" and continue to build Tech's status. Lovin' Coach Mike Young!!! Whit got a gem, let's keep him a long time.

Thanks for doing this, Joe!

Hey! Six more rounds for the four of us!

Everyone please take a moment to admire Cattoor's pose after releasing his 3 in that second shot. That guy knew he was hot.

That guy knew he was hot.

You can keep the Jordan brand, UNC - found the maker's mark for the new Cattoor brand: 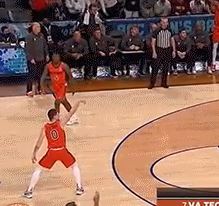 yeah, i wanted to mention that...i love watching him hold that pose after that shot.

I'm terrible at photoshop or I would have already made the silhouette of this.

gonna get a lot of use outta this one

Just got an idea on what to hand out instead of cheap towels at the next home game......

I agree. Hell just might bring my own. Checked Amazon $2.99 with free shipping.

Joe out here supercharging my coffee this morning with giftory

Glorious!
Watch the person in orange behind our bench in the "Schooled" gif. Classic faint into the chair move. Hilarious.

I love the fact that we get a Giftory after ACC Tourney weekend. Thank you Joe for pulling this together.

It's all just so beautiful! No work will be getting done today, will be watching this on repeat.
Thank you Joe!

Damn, Storm that guy has a family

Was that a cross or just a busted coverage? Looks like #1 expected help

Overplayed the screen - Duke was switching everything, so he got caught looking and Storm made a good read to reject the screen and cross him out of his sneakers.

Damn, Storm that guy has had a family

Damn, Storm that guy has had a family had a guy.

These video clips will NEVER get old. GOOOOOOOOOOOOO Hokies!

I'm old enough to remember a little chunk of the fan-base comparing CMY to CJF and calling for his ouster, lmao

You're a two month's old?

And Whit along with him.

With the development Mutts had from last year to this year, another year would turn him into a SCARY player for opposing teams. Especially if he can work on his footwork and eliminating some of the turnovers.

Plus, Dr. Mutts has a nice ring to it

Profanity to the effect of "We're going to lose this game."

He said "mother fucker" and it's very obvious.

Needed two breaths for it, cause you know, vampires.

I know it's been discussed to some degree before, but Aluma and Storm really grew up in the tournament. They became men!

Earlier in the year, Storm was a tentative with the ball. With each tourney game, Storm became more decisive and confident. He was putting the ball on the floor and driving much more assertively than at any time during the season.

During our final stretch last year (and at times this year) Aluma would also become tentative. Every game during the tourney, he was assertive, played smart, and didn't back down to anyone, not even Williams.

Those two keep that up and we are going to be a very tough out in the NCAAT for any team.

And I know it's unlikely but if Aluma did choose to come back next year, and if he continued to play at this level, he would have a legit shot at ACC player of the year. His skill set and court awareness are off the charts at the college level.

I know it's been discussed to some degree before, but Aluma and Storm really grew up in the tournament. They became men!

Sort of like me and calculus. All of a sudden it clicks when you had no clue before.

That was Dynamics with Dr. Hendricks for me.

Only ever had L.G. Kraige himself for dynamics (ESM major, only had Hendricks for Numerical Methods)...if I made it through that, I know I'm good for anything life can throw at me

I had Kraige for dynamics and Hendricks for statics. Didn't mind Hendricks. Kraige wasn't all bad either. Obviously had OCD and a stick shoved waay up his posterior but otherwise was decent.

That was me for Statics with Dr Hendricks. But that could have been more with me actually finally teaching myself for the final instead of trying to learn solely in class.

That Cattoor step-back 3 he drains over Banchero is so cleannnnnn. That's a 6'3" guy hitting a jumper over a 6'10" guy in case you can't tell lol

This GIFtory is a friendly reminder that Hunter Cattoor is a badass mother fucker.

This should be plaid!

Banchero crawling away after Mutts dunks on him will forever be etched in my mind.

That is the definition of getting worked.

Dude played a great game but you could tell he was frustrated that he was getting minimal help from his teammates. Only guy on their team that looked like he was ready to battle against us.

Thanks, I love it!

Even better than I remembered it. Thanks so much for this work of beauty.

Didn't know where to stick this (and sorry if someone else already linked it) but the basketball team posted their ACC championship game rewind tonight. It's beautiful.

I need a still of that Mutts grin at 4:17 while Banchero is trying to salvage his dignity

I tried to upvote every comment except the ones with 25 for obvious reasons. Still loving to see the enthusiasm around the mbball program with that run in the tourney. Even had folks here in GA telling me congrats which I never thought would happen.

People hate Duke that much

After looking thru this post for the umpteenth time, I have to say that this is one of the all-time greatest Giftory threads ever.