The Hokies planted their flag in Lynchburg and put a little brother in their place. 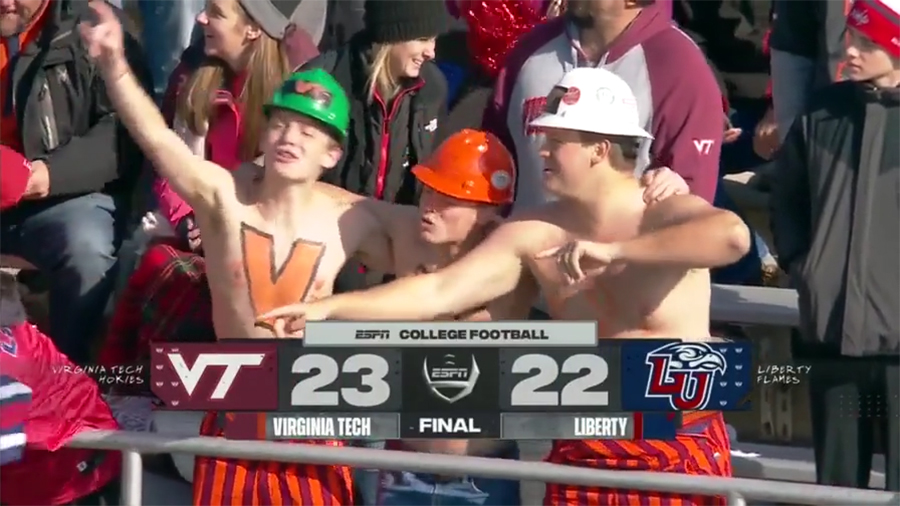 TURN THE MUSIC UP, BONUS PER REQUEST OF maxANDcheese:

I made this available for everyone to enjoy, instead of only for TKPC, because I figured all of Hokie Nation needed a good thing. Though it would be awesome if a couple of people decided to get fully dipped. If 2 new people jump in, film review will be available for all too.

You aren't casting the spell right. The magic comes from "full dipped," not "fully."

I will say this every time Joe asks for new members - I am a smarter football fan because of French's film reviews and the annual price of TKP is essentially skipping 8 trips to Taco Bell annually.

Amen. French's film reviews are worth the subscription price by themselves, and they're only a fraction of the excellent content this site provides.

Did an offensive lineman who has stunk all year suddenly look like a beast?

An interesting subpackage on defense

All Delane, All the Time

Dip yourself before you rip yourself....or something like that. Just do it.

Come on in. The water is nice!

Out of curiosity, is there any chance you'll be offering a Black Friday or Cyber Monday deal to sign up? That is, offering a sale price? I know this hasn't been done in the past, but I thought I'd ask since we're at that point in the year.

It's prudent to ask, but no I won't be. Truthfully, I'm planning to raise the price at some point next year provided I get a new code release wrapped up.

You're alright, Joe. I don't care what they say about you.

All that pressure was beautiful to see.

Thanks for the late addition Joe, I am on my way to see Turnstile today, so it has already been shared to a few of my PA buddies.

Getting my vocal chords ready for 2pm. GIFTORY is the best breakfast.

After about six hours in the Washington County Library due to wifi issues visiting back home, it is in the can.

Does "Liberating a Win" count as a punny headline?

Hokies Pool Together a Win

Bowen and Marve Tower Above Liberty

I know they were honoring UVA, but UL made a mistake wearing UVA blue against us.

Blue or not, all this did was show that we need far more color v color games than we currently get. If we could scrap our white jerseys and go maroon as our main and orange as our alternate, I'd be a happy man.

Only teams we might have issues with are Syracuse, BC, FSU, Miami, and Clemson.

And it would depend on the home team. Home team chooses their home uniform, and we go with the one that differs the most.

So if Cuse goes blue, we go orange, and if they go orange we go maroon. FSU and BC we'd probably go orange unless they go gold, in which case we'd go maroon. Miami, same as Cuse just green instead of blue, and Clemson we'd just go opposite of their choice.

It would be simple to implement and would make every game look that much better.

The only issues we might have are against teams like NC State or Louisville where neither our orange or maroon really clashes enough with their red to make it work. In instances where they wanted to go red, we might need a 3rd uniform, which we could do as an annual one off. (yes, very much thinking soccer style here, and if you changed up the 3rd jersey every year, its an easy way to collect merchandise sales)

Wow p!!!! Can you put all that in an easy to follow analytic decision matrix, please.

Color vs Color is beautiful. It's why the USC vs. UCLA game is visually appeasing. That, and Caleb Williams is very good at football.

I loved the way Keli Lawson dumped that tight end on his ass with a one armed shiver and then sacked the quarterback. Really hope he continues to develop into a monster.

Lawson is maddeningly inconsistent. He looked like a monster a couple of times, and lost others. But, he moved around much more fluidly and committed than he did during his first cameo, when his brain tied up his feet. He just has to use that range to get into the right place, and be more productive as result.

This may have been a changing of the guard game at linebacker. Tisdale played some, and poorly, early, and Lawson took over the rest of the game. Jayden McDonald got some spot duty at MIKE in subpackages, which if I am counting would be his fourth position in two years in Blacksburg. Pry seems to value their length and range. Now, they have to build their bodies to carry more anvil without losing that speed and range, and get more comfortable in the scheme so they can play faster.

I know Tisdale said he was coming back for his last year, but I am not entirely convinced it will be in Blacksburg.

Isn't that what you expect to see out of a freshman who's playing a position for the first time?

Funny you mention that last part. During Pry's presser last week he was asked about it, said yeah it's great we think the world of him, but we really need to see about this roster and what it's going to look like. Thought that tone was very telling.

This week is a big film review, and I couldn't get to everything I wanted to cover in clips. But, I wanted to make a note of a guy who has underachieved greatly during his two years in Blacksburg- wide receiver Jaylon Jones. While Jones didn't have any big catches like he had against Miami last season, he played his most engaged game in the Virginia Tech uniform. He was terrific as a gunner on punt coverage and forced a fumble against one of the best returners in the country. He got more reps on offense, and during those reps, he blocked aggressively and ran his routes with purpose. I think the light may be coming on, and I hope he can get some targets and make some plays if the UVA game ends up happening. If not, it is a big spring for him. There are reps to be had if he shows the kind of effort he showed Saturday.

Yeehaa!
And big up's for Spartanburg High School 's John Love for evading one tackle, running for a first down on the fake, and not coughing up the ball. (Narrator: 'he's not a big guy')

Love it! On that fake punt, if Gallo gets his block clean, that could have gone all the way!

And for all of the talk of not blitzing late in games, I love that the pressure at the end came from the front 4. It's amazing to see that the defense can remain effective late in the game when they get some rest from complementary offense.

To me, the defense has always looked competitive, but they're just not deep enough to carry the team by themselves unfortunately. Not to say they'd be competing for titles, but I think the lack of oline and subsequent run game has been the single biggest thing that, if improved, would have made a world of difference in the win/loss column.

I think that's when some of those creative sub packages came in handy.

I couldn't watch this game and the espn page is all jacked up. For example, the win probability graph has Liberty with the winning score lol. This giftory gives me a taste of what I missed.

OMG you are correct.
It shows the score in the win prob graph as 21-22 Liberty.
ESPN VT-Lib

Nice. My favorite part is just underneath the graph is "According to ESPN Analytics"

Are those the same people who bring you the FPI?

What a total clown show

I've missed GIFtory so much!! Everything is so much better after a win!!