Oak Hill post player is set to enroll in fall 2016. 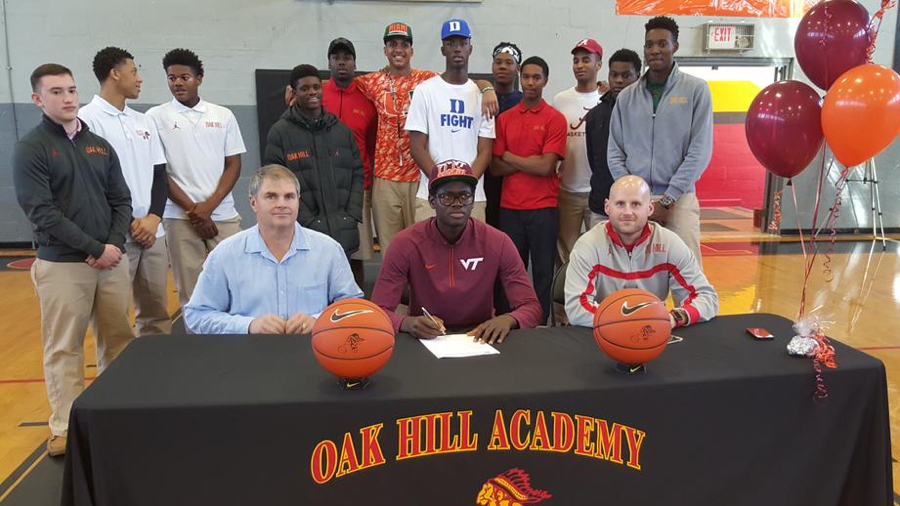 Power forward Khadim Sy signed his NLI with Virginia Tech on Wednesday. The 6-10, 245 pound Oak Hill Academy (Mouth of Wilson, Virginia) product is rated as a 3-star prospect by 247Sports, Rivals and ESPN.

"I'm so happy to be a Hokie today," Sy said in a statement. "Oak Hill has been my home for three years; now Blacksburg will be my home for the next four. I can't wait to play for coach Williams and his staff and compete in the ACC, the best basketball conference in America."

Last season the Dakar, Senegal native came off the bench and averaged 6.5 points and 6.0 rebounds per game. In two games this season, he's averaged 11.0 points, 7.5 rebounds and 3.0 blocked shots.

Sy verbally committed to the Hokies on October 26, 2015 over scholarship offers from Georgia Tech, Kansas State, Purdue and Wake Forest. He is expected to bolster Tech's front court next fall. ESPN's scouting report hit the highs and lows of Sy's game.

Strengths: Sy is a late bloomer who has transformed his frame and added a ton of muscle in the last two years. He has a naturally big frame, soft hands and makes a good effort to chase balls down off the glass. He's a potential high volume rebounder, both in traffic as well as out of his area, capable shot-blocker, and also has good enough feet to defend some bigger guys on the perimeter and is thus capable of playing either the four or the five.

Weaknesses: He's not an elite athlete in that while he can play well above the rim given a little bit of room to elevate, he doesn't often show that some explosiveness through contact or in traffic. Offensively, he can play with his back to the basket but still needs to add a can of polish to his post-game and isn't much of a scoring threat outside of the paint either, which is what might limit him to the center position, at least initially.

"We are excited to add an Oak Hill alum to the Hokie family for the first time in over 30 years," Buzz Williams said in a release. "Khadim has been coached at an elite level since he arrived in the states and fills a need we had in our second class. Throughout the two years we have recruited him, he has continued to improve at a consistent rate as a player, and I believe his ceiling is very high. More importantly, he has the character and work ethic that we want those in our program to be about on and off the floor."

Wow! That is a long time. Buzz getting VT back into Oak Hill is a very good thing.

Couldn't agree more! That was one thing I was looking forward to as soon as we signed Buzz. I knew he'd have the pull to get some of those recruits.
Welcome, Khadim!

This is what recruiting looks like. Oak Hill signed six players to Division I schools this year.

Sy has some work to do, and I don't know if he'll pan out or not, but he certainly fills a position of need in terms of depth. If anyone can coach him up, it's Buzz. This also re-establishes a recruiting relationship.

Oh, and also there's all the fun we can have with this:

We are excited to add an Oak Hill alum to the Hokie family for the first time in over 30 years," Buzz Williams 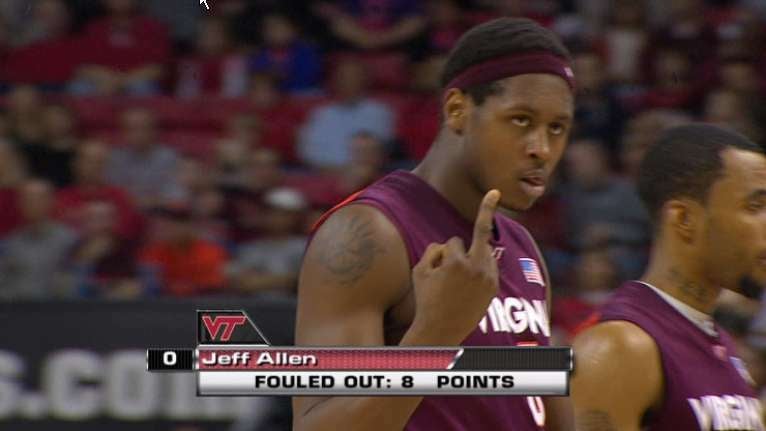 I went to Oak Hill too.

Played as a postgraduate for coach Kevin Keatts at Hargrave Military Academy after playing his senior season at Oak Hill Academy for Steve Smith ...
http://www.hokiesports.com/mbasketball/players/allen_jeff.html

Went to Hargrave to.

Played as a postgraduate for coach Kevin Keatts at Hargrave Military Academy after playing his senior season at Oak Hill Academy for Steve Smith ... Played as a sophomore and junior for Mike Jones at DeMatha High School

yea If I remember right, he caught a bad case of FTA syndrome during his many travels. (Free Throw Atrocity Syndrome)

the Dakar, Senegal native came off the bench and averaged 6.5 points and 6.0 rebounds per game

In Buzz we trust

Not saying he can coach football...but think we can add him to the recruiting staff?

With any luck, Whit will find a football version of him.

I like that he wanted to play in the ACC and didn't chose Wake or GT.

Well WF has been in rebuild mode since Tim Duncan and GT is probably on the decline. Virginia Tech in on the way up the food chain.

Well WF has been in rebuild mode since Tim Duncan Chris Paul.

Dang I forgot about him! thank you

Well they were No. 1 in the country for like a week with Jeff Teague (and then promptly lost to Cleveland St. in the tourney)

I hope he wears those glasses on the court.

Bring a little Kurt Rambis to the Hokies Rambis was a beast! Super physical in the paint.

Had to catch up on some videos of this kid. He appears to have above average rebounding skills in terms of positioning and ability to go straight up. Size is ideal for the four, and unless Blackshear is a bust, he wont be called upon immediately to contribute significantly. Shot selection seems like he is much more confident when shooting in close or able to utilize the backboard. Seems to have little or no shots from the perimeter or from the baseline. He will need to develop shots and the ability to dribble in from the baseline to be more than a role player. I imagine his inexperience has been a big help in allowing us to sign him under the radar as he appears to have all the tools to be a successful ACC big man but those tools need some cleaning up. I would expect to see a few minutes a game next season and gradually increasing second year as long as his upward improvement continues.

I will say I am surprised that Buzz managed to beat out Danny Manning and Wake Forest for this signing. Manning is known to be a big man whisperer, having played the position and spent time under some top coaches. Another good sign was he chose Buzz over Purdue after having an official visit there. Purdue is becoming well known for putting big men in the league, even this season, they have a rotation of at least three 7 footers roaming the court there.

I'll take a post man with size, good positioning, hustle, and rebounding ability over one that score any day. Offensive post moves can be taught fairly easily compared to those other things. Welcome to the Hokies!

Welcome to the good guys, Sy. You will definitely be needed under the rim for us. I was going to watch a couple of Oak Hill games this season anyway, now I'm excited to be watching a future Hokie.