A Blizzard Of Points Leads Buzzketball To Victory 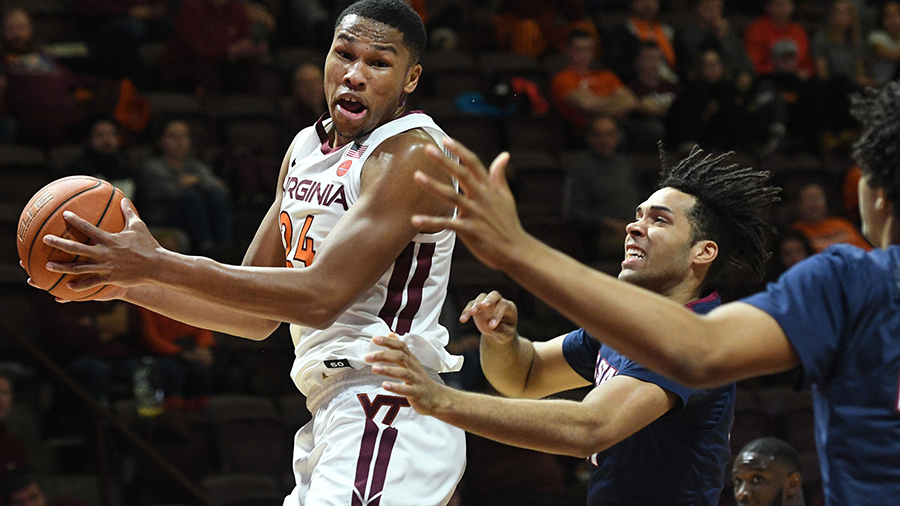 South Carolina State had a snowball's chance in hell to beat the Hokies on Sunday afternoon.

Buzzketball routed the Bulldogs 81-44. The game was played in front of maybe 1,000 spectators, as Blacksburg dealt with a foot of snow.

Virginia Tech played sloppy and undisciplined at the start. Perhaps they were thinking about a snow day. The Hokies missed open shots and threw the ball away. To their credit, the Bulldogs tried all kinds of defensive looks against the Hokies, and it flustered them. Tech had only six points at the under-12 media timeout in the first half.

Prior to the tip, Tech shot 51.4% from the field. That's good for seventh-best nationally. However, in the first half against the Bulldogs, the Hokies only shot 34.5%. Buzzketball turned that around after the break and shot 62.1% from the field in the final 20.

Kerry Blackshear Jr. had the biggest impact against the Bulldogs. He secured his, and Tech's, first double-double of the season. He finished with 12 points, 13 rebounds, and 5 assists. That statline is impressive. It could've been even better. Blackshear Jr. started the game 0 for 4, all on easy shots.

"He's a guy that can pass, dribble, and shoot," said Buzz Williams. "He just happens to be tall. No matter where the ball is, when he gets a touch, typically speaking, really good things happen. He has a better understanding of the game than any player I've coached. A better understanding of the game than me. And good things tend to happen. When his spirit is in the right intent, he's really really effective."

It was another balanced attack on offense for the Hokies. Virginia Tech had four players score in double figures. Nickeil Alexander-Walker topped the stat sheet, with 19 points. Justin Robinson put up 16. Blackshear Jr. had the aforementioned 12. Ahmed Hill snuck into double figures with ten. And Virginia Tech also had two players — P.J. Horne and Ty Outlaw — score 9.

The final score indicates a comfortable victory. For the most part, it was. But the Hokies' performance wasn't worry-free. The slow start stood out like a sore thumb. The Hokies started 1 for 10 from the field and scored just six points in the first 8 minutes of action against a MEAC school. That won't cut it against ACC competition.

As was the case in the 21-point win over VMI:

"I thought the best lesson that we took, particularly in the first half, is all the shots we were missing are primarily all the shots that we make," said Williams. "We were shooting practice shots. We weren't making them, yet we made 12 free throws, which was the most we had attempted in a half. But we were not offensive-sensitive when we were on defense, and I thought the maturity that our group showed ... I thought that was the best part of today's game."

In ACC play, the maturity Williams mentioned will be important. Knowing how to handle adversity and dry spells on offense. That's what the Hokies can take away from this blowout.

Next on the docket for the Hokies is Washington in Atlantic City. The Huskies recently took No. 1 Gonzaga to the wire before losing 79-81 on a shot with 0.6 seconds remaining. The last time Virginia Tech travelled away from Blacksburg, they were upset by Penn State.

"Washington will beat us by 25 if we have the same blasé energy that we had at Penn State," noted Williams. "I'm hoping that we learned at Penn State and what we've talked about and shown since then relative to that ... We'll have an issue or two or four, but we don't want it to be an energy issue."

15:40, 6-3 SCSU Virginia Tech scored their first points of the game after almost 3 minutes of action. Hokies have given up some easy shots on defense and can't seem to find the basket on offense. Another slow start. Disconcerting to see after the sloppy end to the VMI game.

11:55, 9-6 SCSU This is ugly. Hokies still haven't led. Blackshear Jr. is 0-4 from the field, with all his misses coming off layups. Virginia Tech has only made one shot from the field.

9:59, 10-9 VT Ahmed Hill gives the Hokies their first lead, more than halfway into the game. Less than ideal. South Carolina State has done a good job of switching up their defense. It's confusing the Hokies.

3:51, 24-18 VT Kerry Blackshear Jr. picks up his requisite second foul of the first half. He's got two points on two free throws, and still hasn't made a shot from the field.

1:16, 29-23 VT Ahmed Hill is already in ACC form, it appears. 0-4 from beyond the arc, with all of them seemingly going halfway down before popping back out. Hokies are getting some separation though.

00.0, 34-23 VT Robinson went on a little five-point spurt to end the half. An 11-point lead feels surprising, based on how slowly the Hokies started the game.

16:16, 45-25 VT The Hokies have way more energy after the break. Three baskets from deep have put this game out of reach.

11:58, 58-30 VT Hokies continued to shoot the ball very well from three. Outlaw now has 9 points on 3 for 4 shooting beyond the arc. Hill finally made one as well, but he's just 2 for 11 overall from the field.

7:56, 62-34 VT In the last few minutes, both Robinson and Blackshear Jr. went down with injuries. Robinson returned to the game a couple minutes later. Blackshear Jr. was still nursing his knee though when the game went to break.

I'm actually encouraged by this game. It was ugly to start with and nothing that we typically do was working. VT adapted, took what was being given to them, and still ended up beating the opposing team by a wide margin.

That snowball was doing pretty good for about the first 10 minutes.

Props to Alexander-Walker for laying it down.

I'm sorry, but the does the word "blizzard" not make anyone else uncomfortable?

An avalanche of threes after half

To truly be a top tier team, we need to be able shake off slumps quicker and not having to wait for halftime. It was good to see the team come fired up in the second half.

There was decent noise for a tiny crowd.

I'm encouraged by the big win and how the Hokies hung in to get a win (I think we had 3+ offensive boards on one sequence when it was 13-10 Hokies. We kept the ball in the offensive half for a long while even though we could not make a shot). That said, we don't have the depth this year to play Hill off the bench. He needs to get his game together and start scoring. This isn't last season where we started playing zone defense and Wilson gets the starts because Hill doesn't know the defensive scheme.

"When his spirit is in the right intent, he's really really effective."

Classic Buzz quote. Sounds like something translated from a kung fu movie.

edit: though now that I'm reading it sober it makes a little more sense.

What a great year for us to become a basketball school, let's keep rolling...

Landers Nolley - still averaging 0 PPG and 0 RPG. Has anyone figured out his average ACT score yet? This is taking forever.

If this continues for much longer, we might as well redshirt him. These OOC games were crucial for him to get on the same page as the rest of the team, and now that opportunity is gone. Even worse, it sounds like there is zero indication from the NCAA on when they're even going to bother reviewing his information to make a determination.

And considering he hasn't dressed in the last couple weeks, it certainly looks like the staff is preparing for him to not play this year.

Does the NCAA grant a hardship waiver for wasting your f'n time with their bullshit.

Better question, is if the NCAA says he isn't eligible are we even allowed to keep him on scholarship? If we have to drop his scholarship, does Nolley sue the NCAA?

its the only way this changes. unless the NCAA gets sued for so much money that they dont want go on living, they will never change.

lol you think the NCAA actually cares? Nah, they do what they do at their own pace, and who cares who it impacts.

He'll get his redshirt from us, and then he'll play next year. The NCAA will pass verdict on him sometime in February, admitting he should have been playing all along and letting us seethe knowing we'll never have seen Nolley and NAW playing together on the court. (NAW is definitely going pro after this year)

Only if NAW can keep up his current level of play against the ACC teams does he go pro at the end of the year.

we should just play him anyway, there is a greater than 0% chance they won't notice

I said this from the start. If they complain just tell them that Tech doesn't care if students cheat on their ACTs and lets all students do so, so its an academic issue. Based on their current pace with Nolley it would only take them 6,250 years to look into each student at Tech and then go back and vacate the national championships.

Based on their current pace with Nolley it would only take them 6,250 years until the heat death of the universe to look into each student at Tech and then go back and vacate the national championships.

That entropy will get after ya.....

Give him a fake mustache and insert him into the roster under the name Nanders Lolley. It's foolproof