"It feels great" -- DaShawn Crawford Commits to the Hokies 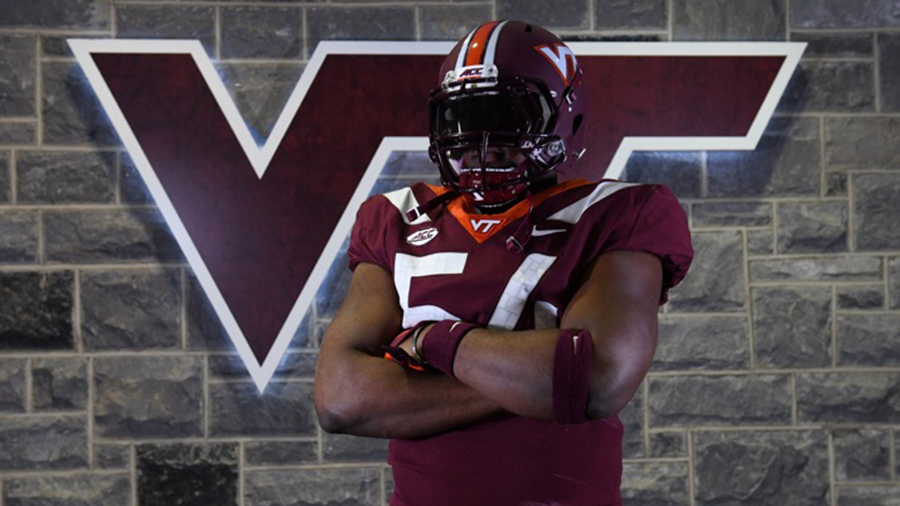 Charley Wiles and Tyrone Nix made the right impression on their in-home visit. Enough at least for the Hokies to seal the deal with 2019 Jones County JUCO DT DaShawn Crawford.

"The coaches [Wiles and Nix] came for a home visit, and I just sat and thought for a while, and I told my parents I wanted to commit," said Crawford. "The coaches were down the road. I called them, and they were excited.

"They were glad to have me and said, 'Welcome to the family.'"

It was a spur the moment decision, but one that had been coming for a while. Crawford, who committed to Troy in October wanted to do it "the right way" and that meant first informing the Troy staff of his decision.

Crawford, rated a 3-star DT per 247Sports (86), took an official visit to Virginia Tech last weekend. He is set to enroll in January with two years of eligibility remaining.

Welcome aboard! Man I think this guy can be a stud for us.

Hope he's ready to get to work because he will have immediate opportunity! Great addition and really pumped to see him on the field!

Welcome to the family DaShawn!

I love that the Hokies grabbed their guy and I loved Crawford's praise of the university yesterday. What a great get.

Time for him to meet Hilgart! Welcome to Hokie Nation!

This would feel better:

If Burke comes back and Brown looks like a playable DT, you can hopefully redshirt 2/3rds or all of Fuga/Pollard/Kendricks. Maybe Becton slides down to DT as well.

Becton is a DE. Don't see him sliding to DT. If anyone moves to the interior it is Debose.

Any word on how Becton is progressing at DE? Thanks

Say hello to your starting DT

Over which one? Porcher IV or Hewitt? Does Porcher IV bulk up enough to take a starting position, thus letting Hewitt come off the bench (where he's more effective because he's rested)?

If he's good enough to start, I'm all for it, because it means we'll have a little depth from guys with experience. Which is something I didn't think we'd be able to have at DT anytime soon.

I'd be pretty surprised if the starters aren't Hewitt and Crawford when we open up the season.

It's easy to read the excitement on this kid. I'm really happy for him. It's awesome to get an opportunity like this. I hope he takes full advantage of it.

Noyce, next week is the early signing period yes?

Yep, can start taking NLI's next Wednesday the 19th.

I know there are a lot of different views on JUCO players, both in terms of how you build a program and their likelihood to not pan out for one reason or another, but this seems like a really solid stop-gap solution to our current DT depth situation. A guy like Crawford will tie up a scholarship for only two years, three years at most if he has an injury and wants to redshirt (just going off that most JUCO's usually have 3 years to play 2). He will hopefully provide us quality starting DT play, but at worst he will be serviceable depth while we attempt to win some recruiting battles for 4 year DT's over the next two cycles and develop our current projects/younger guys who need time. Lots of teams use JUCO to fill gaps like this. You don't want to become over reliant on it, but it can be an effective way to patch your roster from attrition or roster mismanagement.

It should be an essential tool for any good team. Yes, we want to develop players, but to turn a blind eye to transformational talent is short sighted. Evans for us, and that darned Perkins for loluva are good examples of shovel ready projects that turned out well, and there are examples all over the map of good results. Reliance on any one arm of recruiting is dangerous. We should have someone specifically designated to study the JUCO market every year.

I agree completely, Bama has consistently used JUCO to fill gaps and get play-ready guys to handle all the early draft losses they experience each year. Their current defense has two former JUCO starters in CB Saivion Smith and DE Isaiah Buggs.

To your last point, it's my understanding that Tyrone Nix has given us solid inroads with JUCO's, probably from his time spent coaching in the SEC.

Is this our first-ever recruit from Mississippi? I honestly can't think of one off the top of my head...closest I can think of is Vinny Burns from N'awlins

Not sure it's ever been a priority for us, but it's notoriously hard to pull MS kids out of state.

Undersized at 6 feet, 225 pounds, Moore, a Brentsville, Tennessee, product who transferred to Virginia Tech from Holmes Community College in Mississippi, more than made up for it with his burst off the edge, finishing his Hokies career with 35 sacks and 58 tackles for a loss.

I don't see him making in the CFB Hall of Fame (at least not this year), but one thought from the article:

A third-round pick by the Buffalo Bills in 2000, Moore had a far less distinguished NFL career as a tweener who never quite fit in a pro-style defense. He played nine games for the Bills in 2000, registering one sack, and one game for the Dolphins in 2001 before his career was over.

I wonder how well someone like Corey Moore would fit in these days. He was a tweener back then, but it seems like hybrid players are much more accepted these days due to the diversity of roles they can fill while on the field on base defense. Thoughts?

Not to derail the topic, but I also think Xavier Adibi was about 4 years too early in joining the NFL. They bulked him up to 250lb+ after he was drafted as teams were still using old school size over speed linebackers primarily. With the advancements in NFL offensive scheme and more reliance on throwing the ball, Xavier Adibi sized linebackers are more common than ever. I firmly believe he would have had a long and possibly great NFL Career if he had been in the 2012 or after draft classes. He was just in the wrong time.

I think Corey would have had a better time making a career in the NFL now. Back then, the concept of undersized speed rushers wasn't really something that had taken hold in the league. Alex Brown from UF sort of started that push, but Elvis Dumervil from Louisville was really the first guy who showed that fast, undersized guys could make an impact at the DE position. Dumervil was a little heavier, but Corey could have put that weight on if he was given a chance in the NFL. He just didn't have much of a shot as Bills LB after having none of the LB experience while at VT. He still could have stuck around longer, if not for getting shot in the offseason.

This does feel great.

is this usual, "this is good chatter / welcome home" or will this guy have greater impact beyond just being a body to fill the two deep?