The big whistle fields questions from the media. 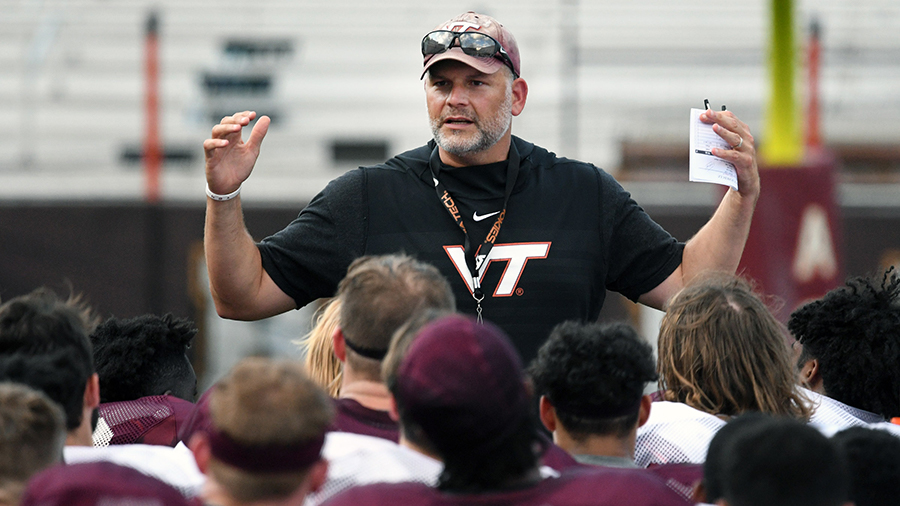 "Alright, back at it today. Kids had a good recovery day yesterday. Practice 7. This will be a five practice block, ending with our second scrimmage. We've got a lot of work to do, but I'm encouraged and happy about some of the progress we're making. I believe Sunday we have Fan Appreciation Day, we're looking forward to that. It's always a good time with our fans. And congratulations to Andrew Allegretta for his job. He's been a pleasure to work with the last several years. Congratulations to him."

WHAT WERE YOUR TAKEAWAYS FROM THE FIRST SCRIMMAGE? AND DID YOU HAVE ANY QUARTERBACKS GO LIVE?

"No, we usually don't do that in the fall. We didn't do that. Usually, we don't do that in the fall. We usually sometimes do it a little bit in the spring. Some good and some bad. Some good competition out there. You know, there's some guys out there competing for chances to play, which I think is a good thing. That was kind of our base installation, now we'll move to some situational work, redzone, goal-line, third down, end of game situations this week.

CAN YOU SPEAK A LITTLE BIT TO THAT SECOND CORNERBACK POSITION? AND WHAT YOU'VE SEEN THERE, WHO'S COMPETING, AND WHAT YOU LIKE OR DON'T LIKE?

Well, I like the way those guys are going about it. You've got [Jermaine] Waller and [Jovonn] Quillen and [Armani] Chatman and [Caleb] Farley. You know, and then you haven't even gotten to [Jeremy] Webb and Nadir [Thompson]. There's good competition there for starting spots, for backup spots, and those guys are continuing to work to improve. I like the way they're going about it.

WHAT WAS IT FROM CALEB FARLEY LAST YEAR TO THIS YEAR, WHAT ARE SOME THINGS YOU WANTED TO SEE HIM MAKE STRIDES IN?

I think he could improve his overall strength. He hadn't played football in a while and he was playing a new position for him. He's got to be a little bit stronger in the run game, I think he'd tell you that. Continue to become a better tackler. He's a willing tackler, he's just got to become a better tackler. I think the offseason, his strength numbers have increased, and that's giving him more and more confidence when it comes to trying to get guys on the ground.

I KNOW IT'S ONLY BEEN A WEEK, BUT WHAT ARE YOUR INITIAL IMPRESSIONS OF KESHAWN KING?

Explosive. Had a couple nice runs in the scrimmage. He's not scared. He pours it up in there. He's got some elite quickness. He's been fun to watch so far, we've got a lot of work to do with him, but he's had a good camp thus far.

TYPICALLY IS IT THE BLOCKING THAT HOLDS BACK YOUNG GUYS LIKE THAT?

Yeah, being an everyday back and running the ball occasionally are two different things. But what I have seen is that he's a willing blocker. He is not scared to run up there and throw what weight he does have around.

YOU MENTIONED LAST YEAR THAT IT FELT LIKE THE TEAM GOT A LITTLE COMPLACENT AND THAT'S WHERE SOME OF THE STRUGGLES STEMMED FROM. YOU MENTIONED THAT THIS YEAR THAT ATTITUDE HAS REALLY SHIFTED TOWARDS A POSITIVE DIRECTION. HAVE YOU NOTICED THAT HAS STARTED TO TRANSLATE ON THE FIELD SO THAT IT'S NOT JUST IN THE LOCKER ROOM BUT IT'S ALSO WITH THE X'S AND O'S AND EXECUTION?

I don't know how to answer that question to be honest with you. I think we're continuing to get better. I think there's a myriad of reasons. More knowledge, more strength, and better conditioning. More time in the program. And the guys seems to genuinely enjoy each other's company. I think there's a bunch of factors that are contributing to what we hope is improvement.

WHAT HAVE YOU SEEN FROM [CHAMARRI] CONNER AT WHIP SO FAR?

Chamarri? Oh, I was pretty pleased with him coming out of the spring, and probably just as pleased now. He's a big, strong, kid that is a good tackler. He's An intense competitor. One of our better special teams players as a true freshman last year. And has settled into that role pretty well. I'm excited about his future.

WHAT HAVE YOU BEEN THE MOST SURPRISED ABOUT SO FAR IN CAMP?

Oh, it's always fun to see the young guys get out there, you know? I always try not to make too much of them after six practices. There's still a long way to go. But, you work to recruit guys and develop those relationships. It's always fun to finally get on the field with them, you know? There's been some guys that we expected to be good that we're excited about. Anxious to continue to bring them along. So, I don't know if there's one thing that's been surprising to me. I felt good coming into camp. I still feel good now. We've got a good nucleus of guys that care about each other and are working hard towards improving.

YOU TALKED IN THE SPRING ABOUT LEADERSHIP AND SOME OF THE EMERGING LEADERS AND GOING THROUGH THE OFFSEASON WORKOUTS YOU CAN COUNT ON THOSE GUYS. WERE THERE ANY PEOPLE AT THE END OF SPRING THAT YOU CHALLENGED THAT STILL WEREN'T THERE THAT YOU THOUGHT NEEDED TO LEAD THIS TEAM? AND IF SO, HAVE YOU SEEN AN IMPROVEMENT?

I don't know if there's a single person that was called out to be a better leader. I think there's a challenge for our leadership council to set a great example and bring some of our other players along. There are some young players that are involved in that, that it's always interesting to have them find their way as leaders when they're only a year or going into their second year of their program. So, there was nobody specifically, but I think that as a group, they're doing a really great job to bring others along.

I DON'T KNOW IF THERE'S A POSITION ON THE TEAM THAT IS MORE UNKNOWN ONCE YOU GET FURTHER DOWN THAN THE DEFENSIVE LINE AND THE SECOND GROUP. IS THERE ANYTHING YOU'VE SEEN FROM THEM THAT IS ENCOURAGING OR YOU FEEL BETTER ABOUT THE DEPTH THERE?

Well, I feel good about the young guys. It's still early. But, I mean, there's been encouraging signs from Norell [Pollard] and Mario [Kendricks] and [Josh] Fuga. The three freshman that we brought in, I'm really excited about the future and what they can be. How soon that happens, or when that happens, I'm not certain obviously. But Jalen Griffen is a guy at end that's, I think, becoming more comfortable there as well. So, some definite signs of progress and hope there. Obviously, that's not to discount [Jarrod] Hewitt and [Dashawn] Crawford and some of those guys. But those three news guys I think are pretty talented.

DOUG NESTER, NOW THAT YOU'VE SEEN HIM IN PADS AND A COUPLE PRACTICES, HOW HAS HE LOOKED AND WHAT ARE YOUR THOUGHTS ON HIM?

I think if he continues to work hard, which I know he will, he's got a chance to have a really bright future. I mean, he's incredibly diligent, he's got some element of perfectionist to him in terms of really wanting to do well and concentrating and focusing on the mental part of playing offensive line. Which is quite a load there. We knew he was talented, we knew he was a great person, great family. If he stays on course and continues to work, I think he's got a chance to be a really good player.

AND J.R. WALKER WAS A GUY THAT COACH FOSTER COMPLIMENTED AT THE END OF THE SPRING. WHAT WAS HIS SUMMER LIKE AND HOW HAS HE BUILT ON THAT?

He had a good summer. You forget some of those guys that come in at semester, that it's really their first summer, sometimes as coaches we forget about that. Cause they've been here for a semester. So you throw them into the older guys and the freshman that didn't come that semester, they are kind of by themselves. He was certainly challenged, really finished the summer strong. We're really proud of that. Continues to develop. What role, I don't know yet obviously, but I know he's stood out in several special teams drills and has a chance to be a good player for us.

WE'VE TALKED ABOUT SOME OF THE YOUNGER OFFENSIVE LINE GUYS. BUT THERE ARE SOME OLDER GUYS THAT HAVEN'T REALLY PLAYED LIKE TYRELL SMITH AND T.J. JACKSON. DO THEY HAVE A CHANCE HERE TO WORK THEIR WAY IN THE MIX SOMEWHERE?

Absolutely. Tyrell has been a great leader for us. Not just in that room but on the entire team. Incredible worker, great strength numbers. And, you know, he knows this is his last go around. So he's pushing hard. T.J. is maybe the most unique athlete I've seen out there, in terms of his size and athletic ability. Every day he continues to take steps forward to being a good player. Not just a big, special, athlete. So, yeah, I think they're definitely pushing and they're going to have opportunities.

Oh yeah. Of course, he only carries his weight in one spot. But in seriousness, if you look at him, he is a really athletic person. Like really special athlete. And a pleasure to be around. Wonderful mother. Just a joy. Like really. I don't say this about a ton of people. But if you talk about somebody who brightens up the room when they're in here, that's T.J. Jackson. Great smile, always in a good mood. Always giving a positive spin to other people. But yeah, he is a good athlete. A very good athlete. His weight, he'll lose a little bit of weight here in fall camp. It's always been something that we've kept an eye on and managed. But he seems to be able to move at a high weight pretty well.

LOOKING AT THE OFFENSIVE LINE COMPARED TO LAST YEAR, WHAT ARE YOU SEEING THE DIFFERENCES ARE? YOU HAVE A LINE THAT IS PRETTY TALKED ABOUT AND PRETTY LARGE. WHAT DO YOU THINK IS GOING TO BE THE KEY DIFFERENCE BETWEEN THE TWO YEARS?

Well, we've got a couple tackles with some experience. That didn't have much experience last year. Luke Tenuta is a guy that is pushing for playing time. He is well over 300 pounds now and has really been impressive and is pushing at the tackle spot as well. We do have some size and athleticism. And a little bit of experience. And I think that's been key is getting some game reps for those guys. You never have enough. We always want more. But, I'm encouraged by the fact that these guys have played and they do have some size and athleticism.

WERE THERE ANY UPDATES ON HOFFMAN OR BAXTON?

There is no update on Brock. Braxton was denied. And he and his family and our administration, or compliance essentially, they're working through the appeals process. But I don't have anything for you on Brock, unfortunately.

Not only did it flub the date, but meant to post them non-TKPC and botched that too. Both are fixed now, thanks. Working one handed and little sleep has drawbacks.

Working one handed and little sleep has drawbacks.

Thanks for this Henry, great read here.

Cool to hear Fuente repeat a lot of the stuff we've heard from inside the program this offseason: Fast starts from our young DT's, TJ Jackson's (apparently) insane athleticism at his size, praise for Conner and JR, JG putting on weight and moving to end, etc.

Sounds like the vibe in the locker room and on the practice field is much more cohesive and competitive.