By the (Advanced) Numbers: It's wait and see Against BC

The Virginia Tech run defense will be tested, and containing chunk gains on the ground is imperative to defeating the Eagles.

Going into the 2018 season, Virginia Tech felt hard to predict. It seemed apparent the defense would take a step back (although few predicted just how big that would be) and there was cautious optimism around the offense. I could have been talked into a 6-win season or a 10-win one. Even then, I looked forward to 2019 when there would be some more stability on the roster and even if not wildly enthusiastic, I would have least have comfort in having expectations I was more confident in.

That did not come to fruition, as the 2019 campaign brings perhaps even more uncertainty. The unit that I thought would gain experience in 2018 and be ready to perform in 2019 — the secondary — is every bit the unstable mess it was last year. That's not to say they can't be better, but it's still an unknown. Ryan Willis, for all the gunslinging excitement he brings, certainly has some areas of his game (reading the defense, making good decisions and throwing while out of the pocket) to improve on. There are rumblings the Hokies might finally have a playmaking King at running back, but everybody has been burned by that false hope too many times recently.

What does play into the Hokies' favor this season is a really, really soft schedule. Although Tech is an extremely long shot to play at national relevance, facing off against Clemson in December is not unrealistic at all. And while the team would probably enter such a game as a big underdog, winning the division and even playing in the game would do wonders for the perception of Virginia Tech football and whether it is a has-been or is returning to former glory.

The first step in that path starts this weekend against Boston College.

Virginia Tech is currently 0-0. The actual and predicted score difference and odds of winning each game are: 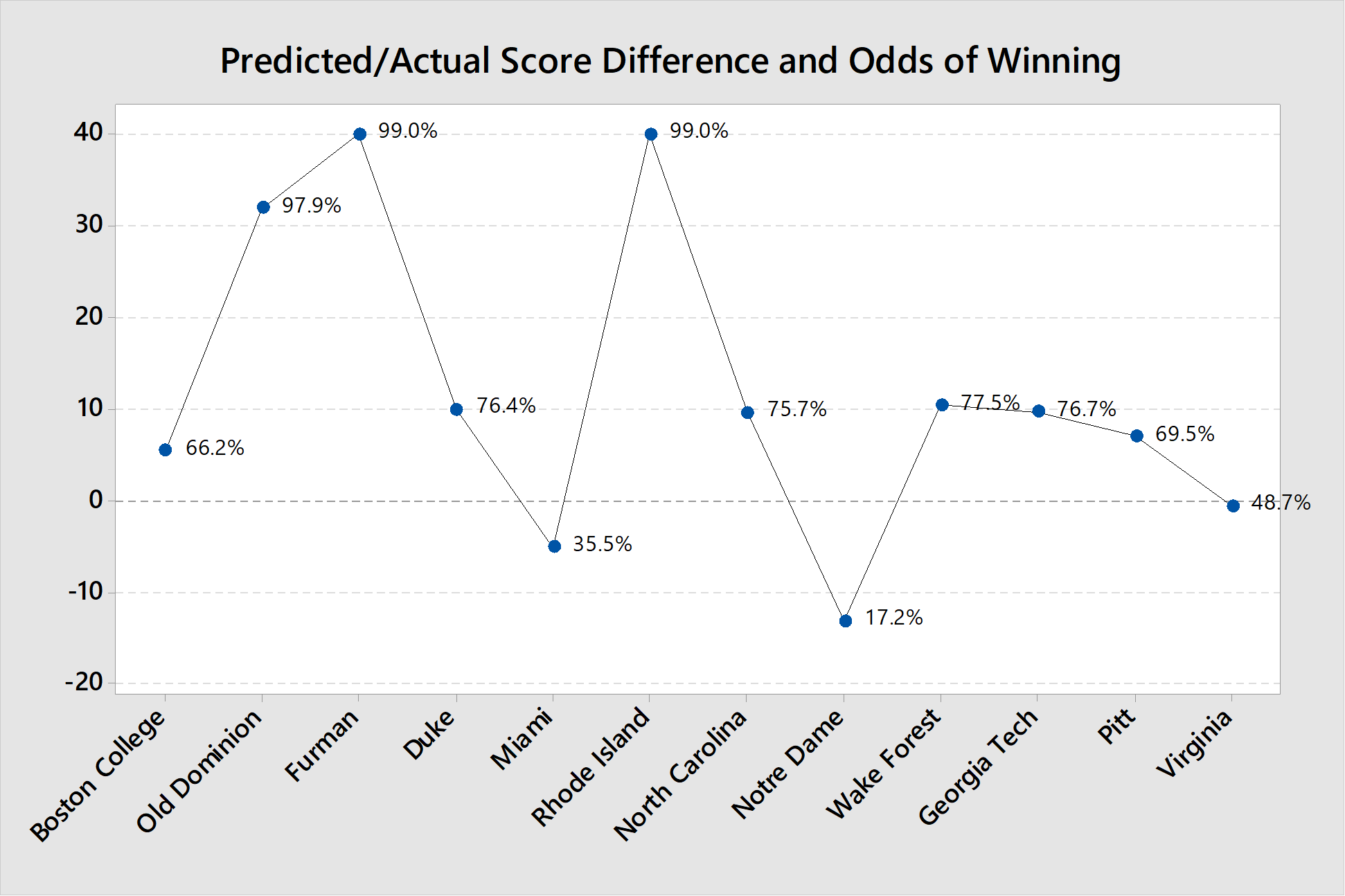 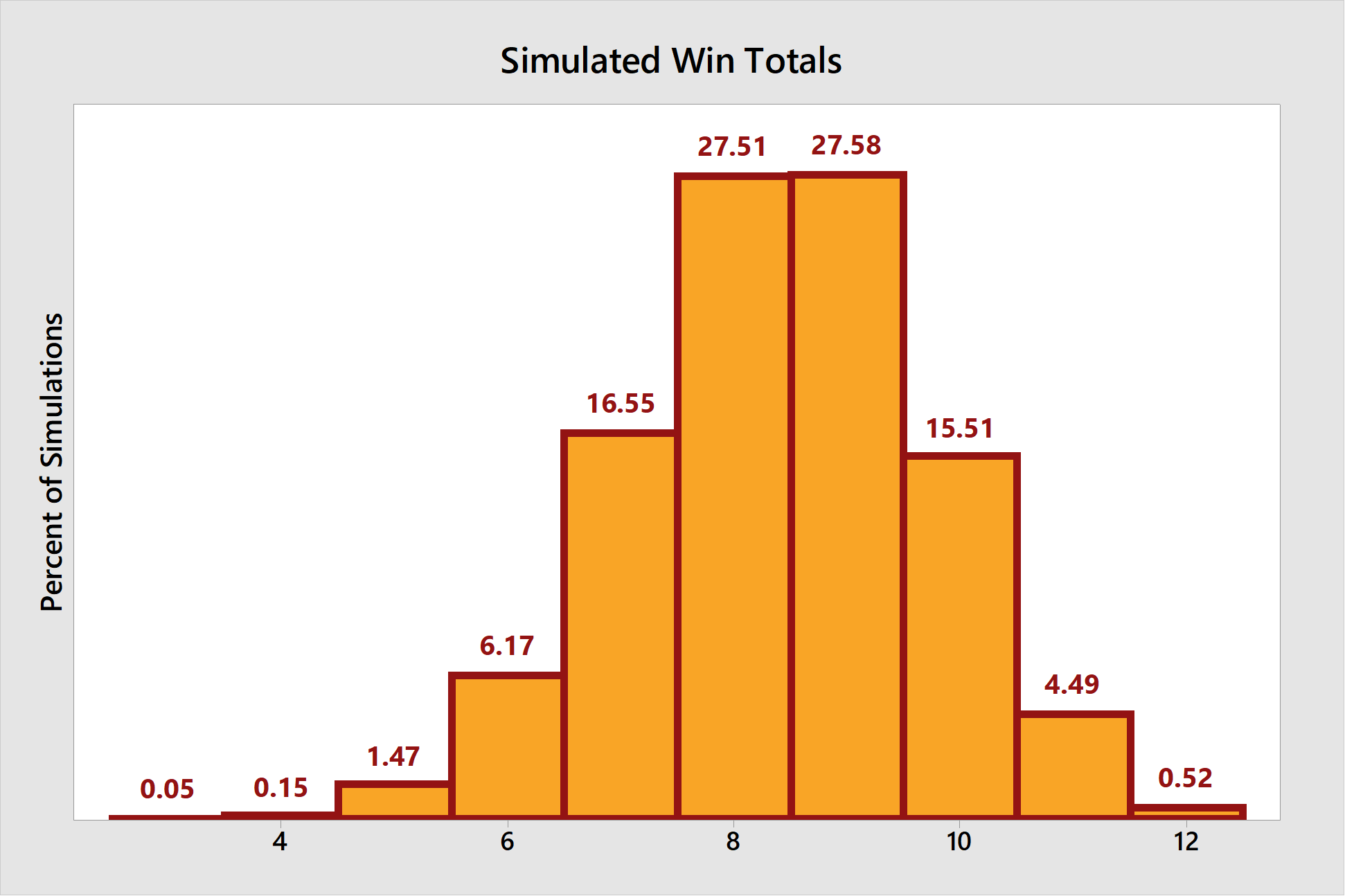 For the season, half of the schedule consists of games where the Hokies are currently a predicted favorite, but not overwhelmingly so (BC, Duke, UNC, Wake, GT, Pitt). The best bet for those games at this point would be a 4-2 record. Then three are highly likely wins, although if there is one team in America you wouldn't bet on to win all of them it is Tech. So that puts the team at about 7-2 with a toss-up against UVA, a moderate underdog game against Miami, and a heavy underdog game against Notre Dame. So 8-9 wins is the most likely range, but we have a whole lot to learn in the next few weeks, not only about Virginia Tech but the teams on their schedule.

Of course, going into week one there is still a realistic probability of disaster or domination...
Based on FPI, the odds of each ACC team beating the ACC teams on their schedule is: 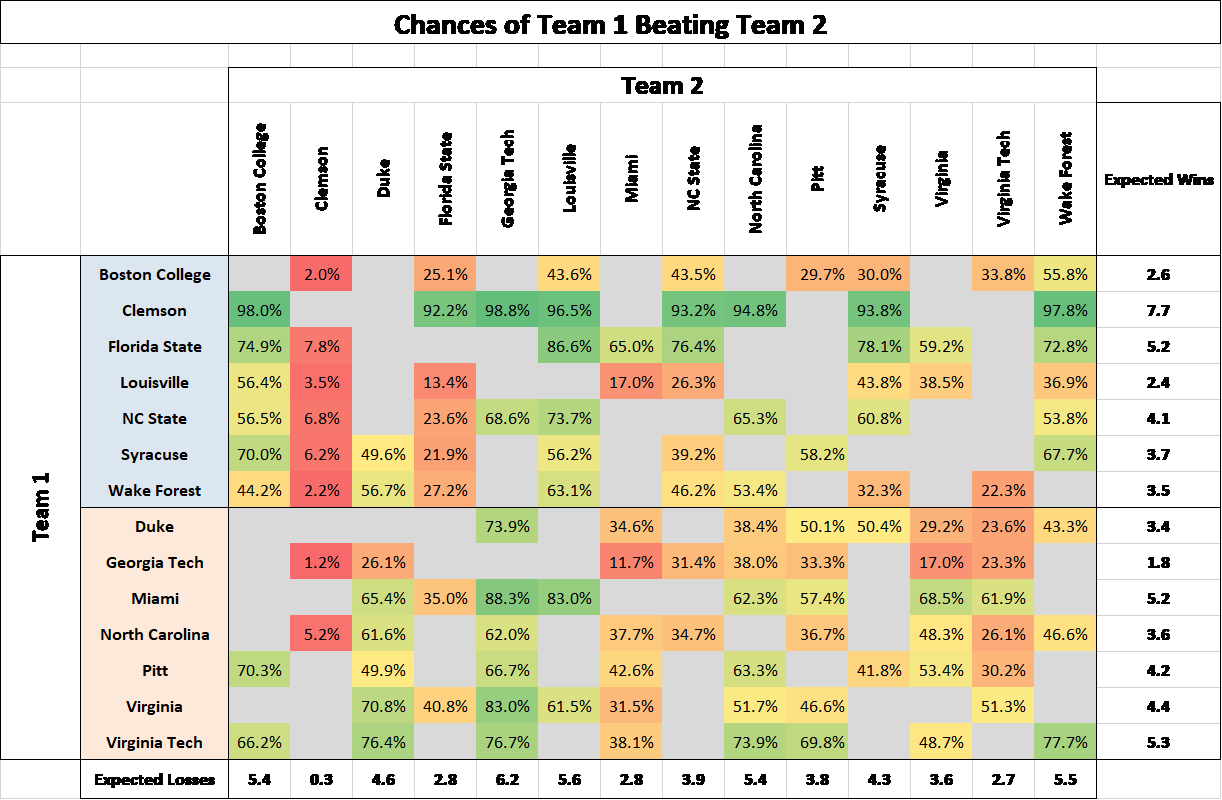 This translates to each team's odds of every possible conference record as: 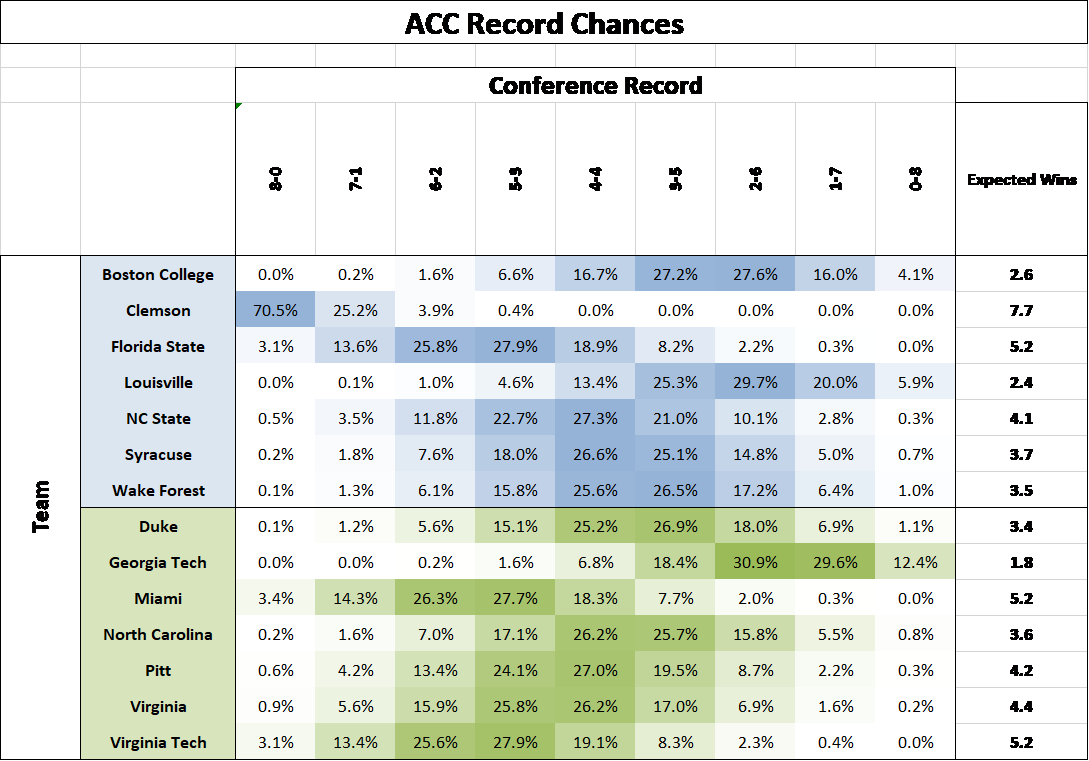 Virginia received a lot of preseason love from the media, with many predicting a Coastal Division championship. But the path there is not nearly as easy as they would make it out to be. By FPI ratings, the mostly likely division champ is either Miami or Virginia Tech, and given the uncertainty in any preseason rating those two are essentially equally likely. The Hokies are given a 70% chance of going 5-3 or better in conference play...not saying 5-3 wins the division, just that those are great odds of being in the picture.

Losses. I mean, they are technically tied with some other teams but the Hokies haven't lost yet and no team has fewer than 0 losses thus far.

I'll do better than this next week. Maybe. 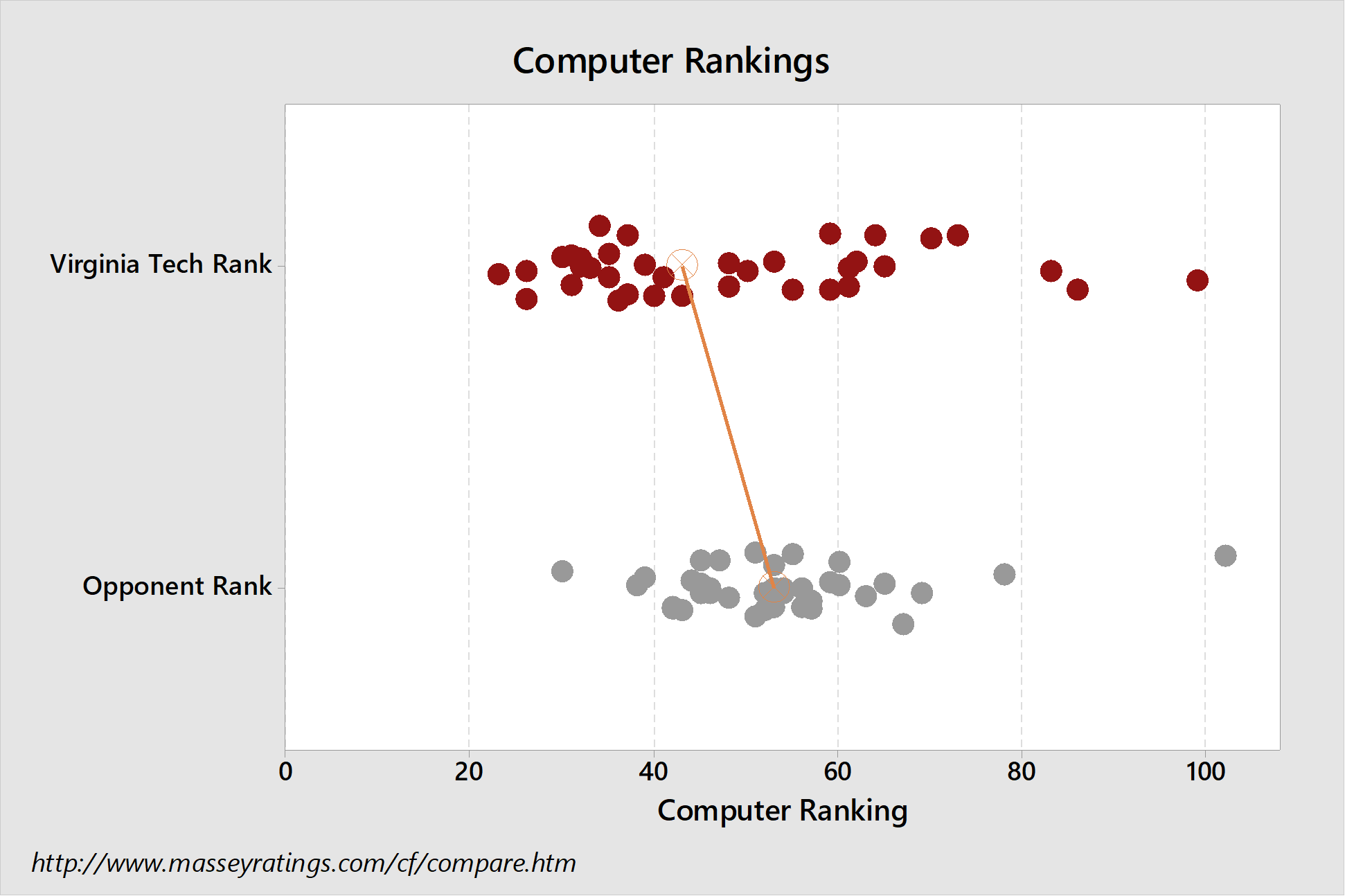 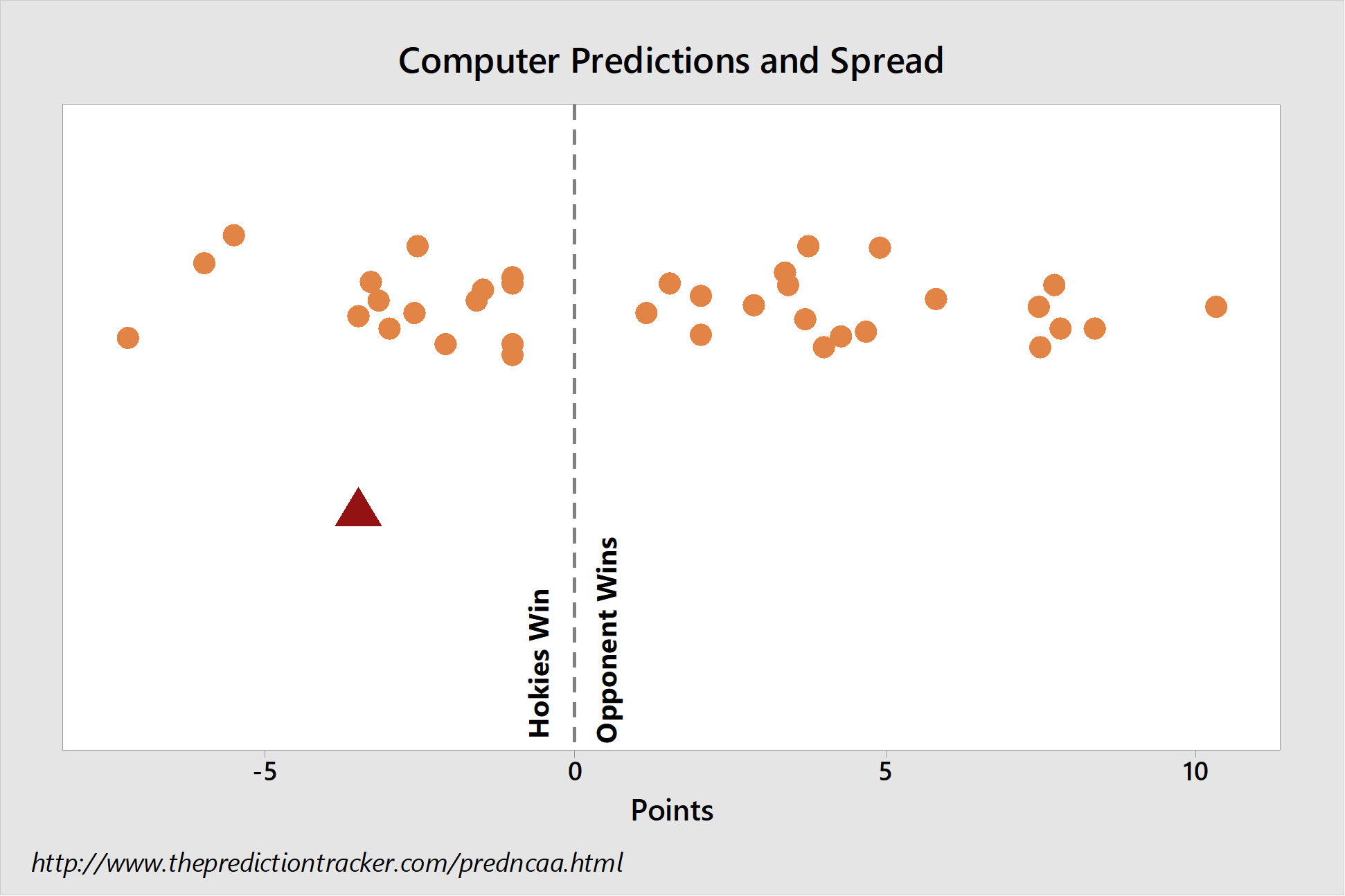 The Eagles only return five defensive starters, but have a great track record of producing linebackers that are playmakers. The team also lost four starters from the offensive line, and wasn't exactly prolific through the air (215 pass yards per game). So while there will no doubt be players who step up in 2019, there's really only one player you need to be worried about heading into the matchup:

Stop Dillon. He will get the carries, but cannot be allowed to gain explosive runs like so many ball carriers did against the Hokies in 2018. Keep him at 1 run or less of 20+ yards, and the defense is likely keeping the Eagles in check enough to walk out with a victory.

Prediction?! Didn't you read the intro to this article? I have absolutely no clue. Dillon might destroy the Hokies on the ground and confirm the worst fears that last season's explosive play woes are still alive and strong going into 2019. Or perhaps another year under Bud Foster has those same players ready to be a nationally elite unit once again.

Likewise on the offense — Virginia Tech has some great receivers and should have a solid offensive line, but an aggressive quarterback can be an asset or a liability. Will Ryan Willis be the same player in 2018, or will he benefit from the great progression past Fuente quarterbacks have experienced from season-to-season?

I am honestly not sure. But my gut tells me the Hokies will certainly step forward from last season, and are hungry for success. I don't know if it will be sustained all season or derailed by attitude or injury or other factors, but I think the Hokies come out firing on all cylinders against the Eagles and win easily.

As always a thanks to ESPN, cfbstats.com, and Minitab Statistical Software.

I am about as certain of us winning as I am of the accuracy of statistical projections before either team has taken a snap. Seems like spot on analyses to me.

Please inject all the TKP game week articles into my veins.

This is actually a great first game as a litmus test. Can we stop a RB this year? If we can at least halt AJ a bit I'll be happy. Nothing more disheartening than seeing a guy go for 7 yards a carry over and over again.

There is, it's when four guys go for 7 yards a carry over and over again.

I really think I have mentally blocked last season. I literally can't remember a single thing from that Pitt game.

College football was cancelled last year. Everyone knows that.

I remember being at Margaritaville in Myrtle, seeing that Pitt scored again, then that's it. It was a good night.

I miss by the advanced numbers so much. Thanks for putting this together, Joel.

Only one run of 20+ yards seems like an incredibly tall task. If I was a bookie I'd set the over/under for such runs at 2.5 and expect the money to drive the line up to 3.5 come game time.

Anyone else glad we have BC the first game of the season? When your defense only needs to smother one all american, it should help with game prep. It reminds me of last year knowing that Cam Akers was the biggest threat for FSU. Hopefully we can post the same result (and that that's where this season stops mirroring last year).

So one long none td run and the rest for negative yards? I'm good with that.

I noticed you cut the Simulated Wins chart off at 12. I'm curious why you didn't go all the way to 15?

Also, I don't see any reason why using "Hokies lead the nation with zero losses" every week is bad? It gets MORE impressive as the season goes on.

I noticed you cut the Simulated Wins chart off at 12. I'm curious why you didn't go all the way to 15?

Actually.... Miami has a loss, so the stats are wrong BOB.

That 8-0 percentage for Miami was Conference W/L. Florida is in the SEC.

Hey, I'm not separated out "week 0" from week 1...or writing this at the last minute no matter what the spelling errors, poor grammar, and general lack of creativity and polish might suggest.

Numbers don't lie, but reality strike and that can screw things up , a lot. I'm hoping we come out strong on both O & D, especially the offense. I want to see a strong/dominate offensive line that make the RB and QB look great.