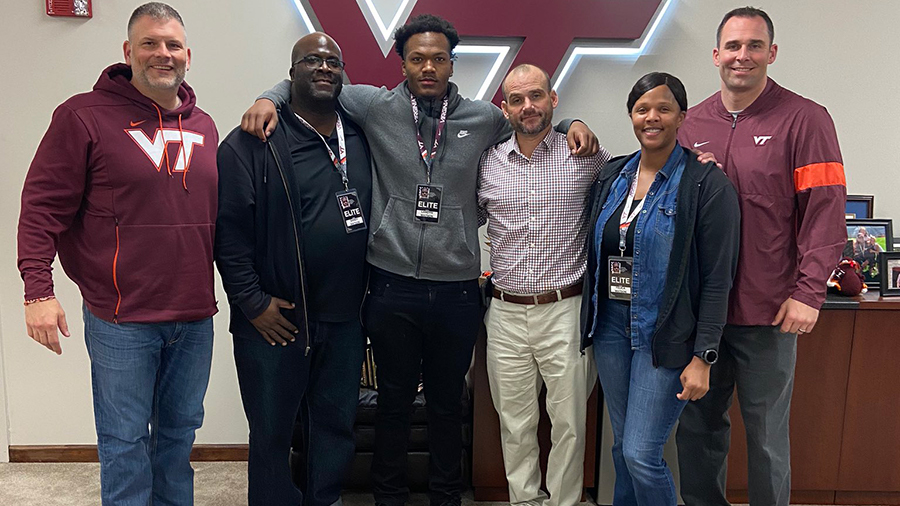 There's a lot to like about Virginia Tech and the direction the football program is headed on the field, according to 2021 four-star defensive end Landyn Watson.

But when Watson first stepped foot on campus in Blacksburg on Jan. 31 for an unofficial visit, it wasn't The Merryman Center, the Beamer-Lawson Indoor Practice Facility or even Lane Stadium that Hokies coaches directed the Hutto High School (TX) product toward first. Instead, they took him straight to meet former Virginia Tech play-by-play announcer Bill Roth, who now leads Virginia Tech's sports media and analytics program and helps students prepare for careers in sports communication and broadcast performance.

"I want to major in sports broadcasting," Watson said. "My first goal is definitely to make it to the NFL and after football, I want to be an ESPN analyst or something like that. Being able to go there and talk to Bill Roth and some of those guys, they definitely helped me get a better view of what I'm going to be working with down the road. It was very cool to get there and check out the sports broadcasting major. That's actually the first place we went when we got there. It really stood out to my parents because it showed that they're serious about their education."

The visit went well for Watson. He said he toured the entire campus, met the entire Tech coaching staff and even watched the Hokies take on fifth-ranked Florida State in an ACC men's basketball game inside Cassell Coliseum.

While a visit to Roth started off the trip, Watson said he couldn't help but be impressed by the current renovations going on around the athletic facilities. In January, work got underway on a $4.5 million project that will renovate and expand the team's weight room in the Merryman Center while also adding meeting rooms and a post-workout nutrition station. The school is also working on a new $20.4 million student-athlete performance center.

"It was definitely a very, very cool visit," Watson said. "The thing that stood out to me and my parents is that they treat you just like family. The people around there — they make the environment very, very good. When we went up there, we saw all the renovations and everything they're doing and what it's going to look like. I'm definitely going to have to go back up there once they get it all finished."

The 6-foot-3, 240-pound defensive end is ranked as the No. 295 overall prospect in the country per the 247Sports Composite and has the build of a hybrid player with a unique ability to be versatile on the edge. This past season, Watson finished with 50 tackles, seven sacks, two forced fumbles, four fumble recoveries and returned two of them for touchdowns. He was named the Texas District 11-5A D-1 Defensive Lineman of the Year.

"What he does best is he has the ability at that position to affect every single play," Hutto football coach Brad LaPlante said. "Whether it's a run at him or run away from him, he's going to have an impact. Whether it's a drop-back pass or a sprint out, he's good there as far as reading screens. He's a guy that will track things down. Some people are only good when the play goes their way and some are only good when the play is away from them. He's good at both. He has very good reaction and change of direction for a kid his size."

Watson said the Tech coaching staff has told him they see him as a defensive end at the next level. He added that they also said if he comes in and does "everything I need to do, I could possibly be playing early."

"The biggest thing for him is his effort will always rise with the challenge," LaPlante said. "If he has an average high school player that he's lining up against, he's going to go dominate that kid. Now when he has a three-, four-, five-star next to him, he knows he has to bring some better intensity or a better first step or maybe a new set of tools. He knows when to bring it. Let's just say that."

One of the most intriguing aspects of Virginia Tech, Watson said, is the coaching duo of Bill Teerlinck and Darryl Tapp — who will both replace Charley Wiles as co-coaches on the defensive line this season. Tapp is a former All-American defensive end for the Hokies that also played in the NFL for 12 years while Teerlinck coached in the league for eight years — most recently for the past two seasons with the Buffalo Bills.

"They have a tremendous coaching staff," Watson said. "The two big hires — Coach Tapp and Coach Teerlinck — they both came from the NFL. To get that type of coaching from someone who has played in the NFL and someone who has coached in it, that's definitely a very good tool to help you get there one day."

Davidson's desire to get recruits from Texas to Blacksburg has resulted in commitments from a pair of 2020 stars in four-star defensive end Alec Bryant (Shadow Creek) and three-star defensive end Robert Wooten (Stafford) along with coveted 2021 four-star quarterback Dematrius Davis (North Shore).

"I'm definitely really close with all three of them," Watson said. "I talk with them almost daily. They've been recruiting me hard every day. The movement is exciting and it's a lot. A lot more recruits are turning their focus toward Virginia Tech as well."

LaPlante noted his star player has all of the tools to be a successful player at the next level. He said between his family, the coaching staff and counselors at the high school and the amount of effort the defensive end has put into finding the right fit, he's certain that Watson will make the right choice.

"For him, he has a lot of people that he's surrounded himself with," LaPlante said. "He has a great family. They've taken a lot of trips. He's going to have an idea of what home is when he chooses that home. It's a village now. For me, it's support. Whatever he and his family need, they will approach me and I will absolutely give it to him. I don't ever feel like I need to be the lead dog in a young man's recruitment. It's his life. I want him to go where he feels he's wanted, where he feels he's needed. Wherever that is, I'm going to tell him I love him and congratulate him and let it go."

Unfortunately for Watson, the trip to Blacksburg was one of the final ones he went on before COVID-19 brought sports to a screeching halt across the world. He said he had planned an official visit back to Tech for June 19-21, but also wanted to visit Penn State, Tennessee, Arkansas, Michigan and Oklahoma.

"It's had a big effect on my recruitment," Watson said of COVID-19. "It's affected me being able to go visit the places I want to go visit so I can get a feel for the school. With me having to make a decision by December or so, it kind of makes the window a little bit smaller."

While his visits have now been put on pause and his future home is to be decided, Watson said he's focused on other things before he finishes his senior year.

For him and his family, he said life is about much more than football and that's what he's focused on for now. And that's also why Virginia Tech remains on his radar.

"I definitely want to go win a state championship with my team," Watson said. "I want to have a tremendous senior season. But really, I just want enjoy my last year of high school and go out with a bang."

I got all sorts of crossed up thinking he had just committed and I missed it -- but this is awesome! I think having TnT on the staff is really going to pay dividends because they have the resume to back up what they're selling. And not to slight Tapp in the least as a second rounder, but he had to fight at every stop he made. He wasn't some superstar player signing bajillion dollar deals -- he brought his lunchpail to work and did what he needed to do to stick in the league -- and that is the vast majority of players on NFL rosters. These guys legitimately actually know what it takes to stick around, and so much of that isn't tied to gaudy sack totals or flashy plays.

I agree about the Tapp-Teerlinck duo paying dividends, especially with these defensive linemen — an area that hasn't had a ton of depth in recent years. It's pretty remarkable to look at Tapp's career and see that he made it 12 years in the NFL. He played key roles on a lot of teams, but I was even surprised when I saw that number. When I spoke with Watson, that seemed to be a big sticking point for him. Both of these guys know what it takes to be successful at the next level and that's going to be a big for future recruits in the long run, IMO.

Pull out all the top guns! Good job Mr Roth, now all that is left is to seal the deal.

I think it was a shrewd move to add a sports media major to the curriculum. There are a lot of athletes that want to go that route, and we've got one of the best in the business at the core of it all. Can we just go ahead and name it the Bill Roth School of Sports Journalism?

I don't know much about Beau Davidson, but this guy deserves a bonus for all the hard work and success he's had in recruiting talented Texas players. Who would have thought we'd have a Texas pipeline. Also the fact that Roth's sports journalism program appealed to him and put us on his shortlist really excites me. This is a boost not only for getting recruits, but is a boost to our academic prestige.