Neville Wants To Start Something Special at Virginia Tech

The Hokies added another 2021 Texas 4-star recruit to their 2021 recruiting class. 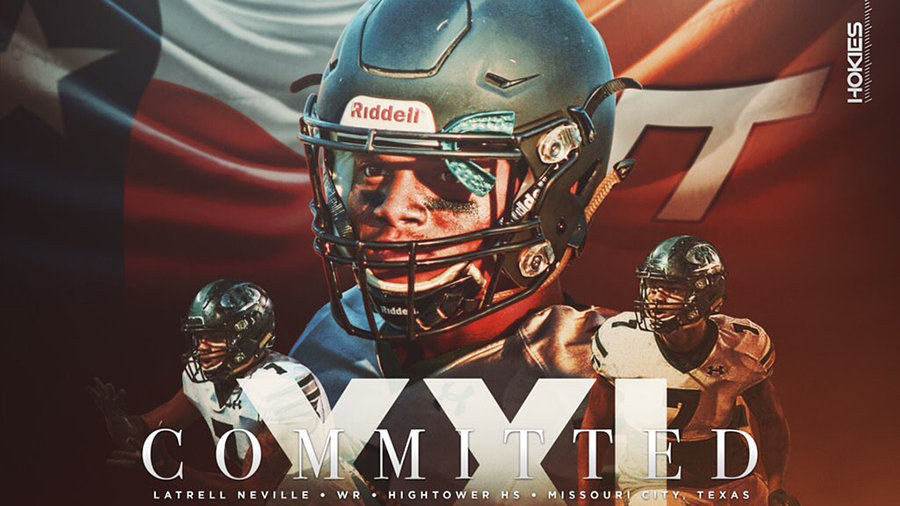 Latrell Neville said it had been in the back of his mind all along.

The 247Sports Composite four-star (0.8992) wide receiver said he planned to commit to Virginia Tech on his birthday in May after attending the Spring Game on April 18. But when COVID-19 brought recruiting to a complete halt and prevented recruits from visiting other campuses, Neville said it was time to make it official.

"I just felt like it was where I needed to be," Neville said. "I didn't want to wait anymore because I planned on committing there anyways. [COVID-19] kind of cut everything short, so I decided to make my decision because there was no reason to keep on waiting."

The 6-foot-3, 195-pound receiver out of Hightower HSl (Missouri City, TX) picked the Hokies from among 44 offers, including from powerhouse programs such as Oklahoma, LSU and Alabama. He said Auburn, Penn State, Florida, West Virginia and Southern California were the schools that were recruiting him the hardest before he chose Tech.

"With a kid like Latrell, because he's such a high-character kid, it brings a lot of positive looks to the program," Hightower coach Joseph Sam said. "We want to make sure that the kids who do have the opportunity skill-wise to go play at the next level — we want to send out high-quality kids with good character. My biggest role is just to guide them, not necessarily sway them where to go. I know there are guys out there that do that, but that's not my job. My job is to give them general recruiting advice on things to look for when it comes to a school."

Last season was Neville's first season playing for Sam at Hightower after transferring from Willowridge just weeks before the season. Facing stiffer competition in a higher classification, Neville finished with 30 catches for 276 yards and a pair of touchdowns. The year before at Willowridge, he had just 17 catches for 315 yards and six scores, but was named the District 11-5A-II Newcomer of the Year.

"It was his first year in our offense because we were a first-year coaching staff," Sam said. "He didn't come until a couple of weeks before fall camp started, so a lot of his numbers are from everything being brand new to him. He got out of the gate a little slow just because he had to learn a lot since he didn't have a chance to go through spring ball and all of that stuff. His numbers really started picking up as we went through the season."

Known for his big body and his ability to go up and get the ball in red-zone passing situations, Neville also has opened eyes with his knack for making plays with the ball in his hand. His size makes him tough to bring down in the open field and he's shown just enough speed to pull away from opposing defenses.

"As a receiver, in my opinion, his biggest strength is what he can do after the catch," Sam said. "He turns into a big running back after the catch. Also, his ball skills are great with him being a basketball player as well."

At Tech, Neville said the coaches told him he'd play in the outside receiver spot. He said that is intriguing because it will allow him to use his strengths and be successful at what he's done best throughout his high school career.

"I'll be playing the X receiver, which is the outside receiver on the field," Neville said. "They just want me to come in and be that guy that I am on the film — a dominant guy."

In Blacksburg, Neville will be coached by Tech receivers coach Jafar Williams, who was one of the primary recruiters for Neville along with assistant director of player personnel Beau Davidson. The relationship he built with both of those coaches proved to be a determining factor in his decision to commit.

"I think a big factor was the fact that Coach Davidson was a very consistent guy," Neville said. "We always talked. I mean it was every day from freshman year. He's a real down-to-earth guy. [Williams] is a real good guy as well, a good family dude. He really gets to know his recruits. He's a great teacher as well, which I like because he can help get me ready for the next level."

Sam said he talked with Neville throughout the process and tried to support him along the way. He said his star receiver often mentioned the family atmosphere around the Tech program as a key factor in his decision, but also was impressed with the focus the program has put into academics.

"Latrell is a big relationships kid," Sam said. "They built really, really good relationships with him. He likes not only how he's going to be used in the offense, but he also likes the academic aspect as well when it comes to Virginia Tech. One of the things I told him is, 'With a kid like you, where you can go to any school you want to go, you have to not just focus on the football side of it because that's always going to be there. Could you be at this place as a student?' He said they made him feel really at home at Virginia Tech. He said he had other big schools talk to him, but the family feel and the relationships he built are what he liked most about Virginia Tech."

Relationships are also big in the #TX2VT recruiting movement — spearheaded by Davidson — that had previously secured commitments from 2020 defensive ends Alec Bryant (Shadow Creek) and Robert Wooten (Stafford) along with coveted 2021 four-star quarterback Dematrius Davis (North Shore). Neville and Davis are the two highest-rated recruits in the current class and he said they've stayed in communication often throughout the entire process.

"I think we're going to end up being a top-10 class, you know?" Neville said. "I think guys are caught up right now on checking the name and not wanting to be different. Once you get two highly-touted prospects, it shows them that if we can do it, they can. I feel like that will speak to some people."

Neville's announcement on Sunday made waves across the recruiting world. 2021 four-star defensive ends Landyn Watson (Hutto) and Naquan Brown (Ocean Lakes) were among the Virginia Tech targets who reacted following the news.

things are getting reallllll interesting 😅 i like it.— Landyn Watson (@landynwatson) April 6, 2020

Neville now transitions from recruit to recruiter. He said he's already working on recruiting other players such as Watson and Brown to join the wave and come to Blacksburg. He insisted that the Hokies are just a few steps away from contending for a national championship and believes that the 2021 class could ultimately be the one to prove that.

"I feel like it's one recruiting class away and I feel like that's going to be our recruiting class," Neville said. "The difference between us and Alabama and those teams is that they have done it consecutively. This class is reversing that trend for us and has six or seven guys that are top-100 type of guys."

With his decision behind him, Neville said he has his sights set on a strong senior season and refining his game before he arrives in Blacksburg. His decision to come to Virginia Tech was always in the back of his mind, and now he's trying to get it into others'.

"I feel like it's just time to get guys to jump in the boat, you know?" Neville said. "That was my plan all along — to get done with it before the summer. Now I can focus on school, ball and getting ready to leave. I'm just ready to get to work."

Trying to tame my excitement that a potential snowball effect in recruiting has commenced...

Trying to tame my excitement that a potential snowball effect in recruiting has commenced...

Are you saying you have a drinking problem?

Looks like a nice get, lets see if ink gets to paper if her has offers from Bama, Oklahoma, etc...

I mean he already has those offers, so...

Hey does this guy have any eligibility remaining? Because we will need to replace Oscar Bradburn at some point.

Pretty sure that is Oscar Bradburn.

"I feel like it's one recruiting class away and I feel like that's going to be our recruiting class," Neville said. "The difference between us and Alabama and those teams is that they have done it consecutively. This class is reversing that trend for us and has six or seven guys that are top-100 type of guys."

Seeing as how our class right now is five players, he's certainly talking like there's several blue chippers to follow

"This class is reversing that trend for us and has six or seven guys that are top-100 type of guys." This is exciting to hear since the last I checked we have 5 total commitments.

I think he is talking about the other kids that he is recruiting. You saw the comments from two other prospects.

He's talking present tense, Heard elsewhere we have a few silent commits that are gonna turn some heads. could be what he's referring to.

that's exactly why it's exciting!!

Plays with a nice chip goes and gets the ball most of the time with his hands instead of waiting for it to get to his chest. Good on the quick screens and has a good physical presence. Looks solid to me excited to see what he can do to help Dee recruit other top tier guys

Great to have Latrell Neville on board. Size wise similar to Bucky Hodges but looks as though he could be better regarding YAC. I think the buzz might be real with Dee and Latrell leading the way.

Wouldn't it be crazy for a program that's never had a handful of Texas recruits in its history to a class that has a handful? Not only that, but we might poach a few from California as well...in addition to the coming season even being played as a definite question mark. These are interesting times, indeed.

Is recruiting in real life the same as in NCAA Football 14? Once you get 4 players from a state on your team that state becomes a pipeline. If so we'll be reeling em in left and right

How about that QB? I like his QB, any chance we can land him too

I doubt we take another QB this class. Having one highly rated TX QB is probably enough for one year.

Bright side - maybe the QB is a junior this year.

Yeah we will see. A year is a long time. Its very nice but I see too many flips.