A Family Tradition: Hokies Looking to add Another Stroman, Pair of Brothers

Defensive back Jalen Stroman is well on his way to making a name for himself. 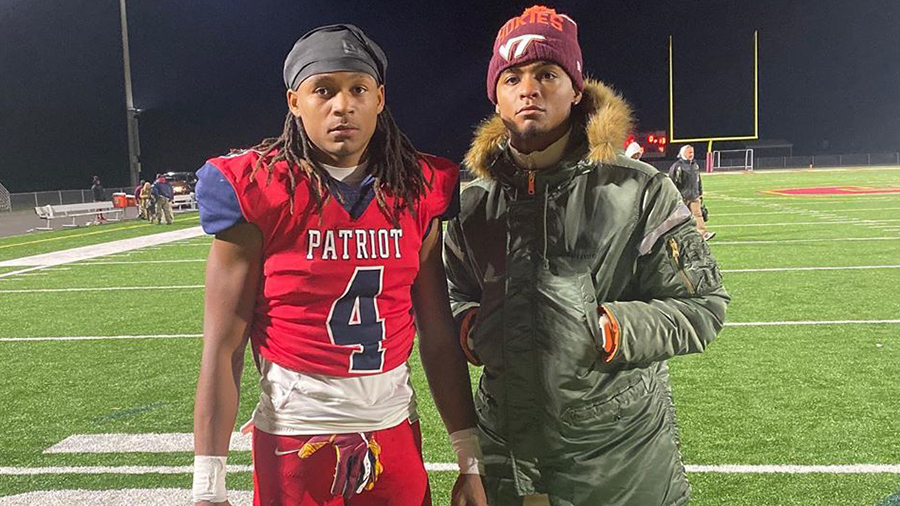 Jalen and Greg Stroman pose after a Patriot football game.

Fuller, Edmunds, Adibi — Virginia Tech has a strong history of family ties. Since 1987, 28 sets of brothers plus 7 father-son combinations have been a part of the football program. And the Stroman brothers may add to that legacy. Jalen Stroman, younger brother of former Tech corner and current Redskin Greg Stroman, has the Hokies on his short list.

The 247Sports Composite ranks Stroman as a 3-star athlete (0.8577) and 21st overall prospect in Virginia for the 2021 cycle. The 6-1, 190-pound safety and Patriot HS product (Nokesville) claims offers from Tech, Virginia, Duke, Louisville, Indiana, Syracuse and Vanderbilt among others.

For Stroman, watching his brother's career unfold has been not only a lesson in hard work, but a source of motivation.

"Ever since I was going up I was watching our brother play and I was like, 'I want to do that,' said Stroman. "So I just kept working. Once the first offer came in, I just wanted to get more so I kept working and working my way up to it."

There are a lot of similarities in Jalen and Greg's game. They're both defensive backs with rangy speed that can make a jump on the ball at any moment. But perhaps Jalen's greatest asset is his mental game.

"There's nothing you can give him, and it be too much for him. He can handle anything you throw at him. He studies. He's one of the people where you can tell him anything and he'll make sure he gets it done. You know you've got something special when your best player is also your hardest worker."

Stroman diagnosed the plays above almost immediately after the snap. By the time the quarterback decided to throw, he already moved into position to make the play. He has the athleticism to cover ground in a flash, and, more importantly, has the smarts to know where to go.

"We were doing some spring 7-on-7, which was the first time I really got to work with our kids with any kind of competition factor. And Jalen was covering basically the middle of the field to the trips receivers," said Finnerty.

"He made a play on the single receiver all the way on the other side of the field on a deep fade. And I go, 'Jalen, you know that's not your play, right?' And he said, 'well coach, I knew where the ball was going.' Physically he was able to go from the middle of the field all the way to the opposite sideline he was focusing on and make the play. He was able to understand the play and read the quarterback enough to make that play. When I saw that I was like 'wow, this is an incredible football player.'"

Stroman excels in a two deep safety scheme. That allows him to read the offense both pre- and post-snap and go make the play, whereas a Cover 1 or Cover 0 defense would have him locked in on a single receiver. Stroman is sneaky physical. He has excellent ball skills to high point the ball, and is comfortable in press coverage.

"We can bring him up in the box and he'll go make a play," said Finnerty. "He reads the game so well he can really play anywhere on the field."

Stroman recognized the run and blocking scheme on this goal-to-go play and came up to fill and assist on a tackle short of the end zone.

Stroman has been to Blacksburg a plethora of times. He visited most recently in February for Tech's Junior Day event to learn the life of a Tech student.

"I actually just went with the academic advisors and just learned about Tech a little deeper. And I also learned a bit more about the schemes of the defense with coach [Justin Hamilton]," said Stroman.

Tech is pushing their new student athlete facilities as a strong recruiting pitch, both in person and on social media. For Stroman, the message rings loud and clear.

"I'll have a new lounge, a new cafeteria, a new weight room," said Stroman. "And everything's right there. That way I don't have to travel all around campus to find where I got to go. It's all there in one spot."

Stroman plans to commit on his birthday, May 22nd. The Hokies are at the top of his list, along with Duke, Virginia, and Louisville. Big brother is trying not to persuade Jalen, even if it's a tough task.

"He's staying pretty level," said Stroman jokingly. "He just wants me to go wherever I feel like is home and where I can make an impact."

"Having [Greg] by my side while I go through this is a big help to me because he's just helping me see what to look out for and how to get to the place that's going to help me make it to the next level."

Great article and hope he decides to join. My personal favorite Hokie brothers have to be Kevin and Johnathan Lewis.

Loved how his brother played, if he is anything like him would be a great get

That sound you hear is It's a Stroman Jersey I Swear getting hot and bothered.

I'd say more bothered than hot. So many questions for me over this potential commitment. Is he immediately my favorite player, because that's just nepotism and would make me uncomfortable. Do I need to specify which Stroman it is in my username? What do I do if he commits and doesn't wear number 3? If he goes to a rival do I need to change my username entirely? It's been an emotional time

Would be great to have him. I loved watching his brother play as well.

One of Beamer's feathers in his cap was having younger brothers of current or former Virginia Tech players come to VT. His view was that the brothers won't sugarcoat if the program has problems and if they commit, it means the older kids are "being treated right".

I hope Lil' Stro comes in because he seems like a good kid and I think it'll help the perception of Fuente more than the average commit would.

He'd be a fan favorite from the start no doubt.

Him and Hollifield would be good gets for Fuente.

Does Fuente take credit for the Gallo brothers?

In my head I was thinking Greg was shorter than Jalen. In the photo he seems taller. None of that really matters. +1 for use of the word Plethora. Hope we get this guy. #allthebrothers

I will be making my college decision in the next couple weeks. On my birthday, May 22nd I will make the announcement on all social media. pic.twitter.com/sp0yMyVA3T— Jalen Stroman (@jstroman04) April 23, 2020

I can totally see him playing FS for us and making the pre-snap alignment calls for the rest of the secondary.

We always, always want all the brothers. Especially the little brothers. They always outshine athletically.

At this point in his career, Jalen is a more physically built athlete than Greg was. His coach said he's pushing 6'3" 200. Hit a growth spurt recently. If he does sign, it'll be interesting to see what he's like after some #Hillgains

Except for the little brother we don't speak of...

I have to admit that little brother we dont speak of I really enjoyed watching strictly from a football standpoint. I for years tried to pass his jersey off as if it were a Tyrod jersey but that 2005 Miami orange sleeve is a dead giveaway unfortunately. To this day I believe if that little brother hadn't been a complete idiot on and off the field then we play for if not win the 2006 Natty.