Hamilton looks to brighten up Virginia Tech's 2021 class with a little Californication. 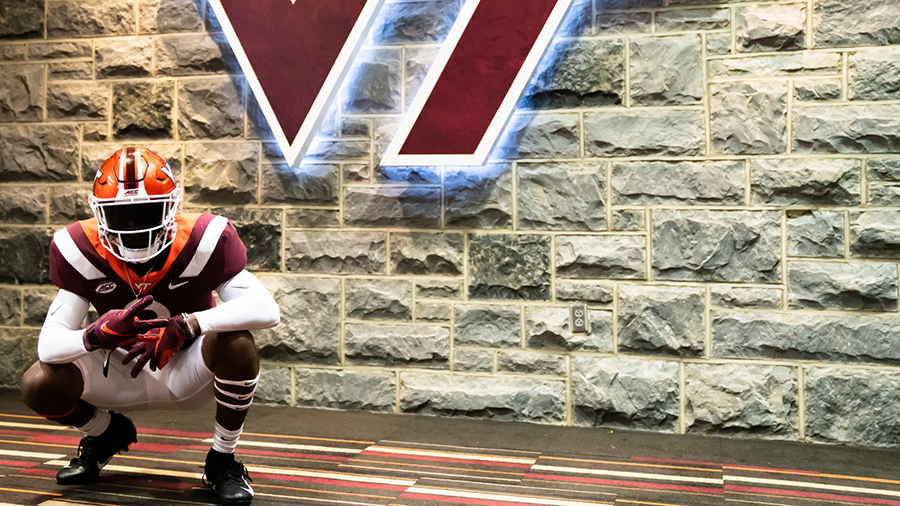 DJ Harvey poses for a photo at Virginia Tech.

"They said, 'hey, we just watched and we really love your film,'" said Harvey.

Some coaches told Harvey that his film was too long, and they didn't study the whole thing. That wasn't the case with Davidson and Hamilton.

"They said they couldn't take their eyes off the film," said Harvey. "When that happens, you know you have a school that's really down to earth for you."

Harvey received offers from all over the western half of the country, but not as much attention from any east coast schools. So, when the Hokies kept calling, Harvey noticed.

"I was shocked," said Harvey of the Hokies' pursuit of him.

He was able to visit Blacksburg on March 1st as part of the program's first "Midnight Madness" recruiting event.

"It was cool," said Harvey. "You know how people say you have to go to LSU, Alabama, Clemson to really know what it's about? You have to go to Virginia Tech. People can't really describe it. But when you actually get there and you go it's a whole different feeling to that place. It's a whole different spiel to it. So, I've been telling people, when you have the opportunity to go you need to go. Because I want to go again. That was just my mindset, and I just want to see it again."

Harvey has the Hokies among his top group along with Southern California, Texas, Oregon, and California. He plans to see his first game in Lane Stadium when Penn State travels to Blacksburg this fall.

Harvey acknowledges that it's a bit against the grain for an LA kid to look at a school in Virginia. But the change of scenery is something that Harvey has a positive and mature spin on.

"If you're from the west coast you want to stay at home," said Harvey. "When you [have] a school [that's] at home and you know that he's on the west coast and he doesn't like the cold, why would he go somewhere where it's cold? Personally, I don't mind the cold. If you play on the west coast you don't play in the cold. But let's say you get drafted to the Eagles, the Philadelphia Eagles. That's cold, like, you're not gonna be ready for that. You're gonna be like freezing."

The Hokies are up against stiff competition in the courtship of Harvey. Southern California, Texas, and Oregon are all recruiting powers with their own style and flare. But Harvey sees the new look Hokies as a real competitor on the trail.

"They're different. They're a different school than Texas, USC, or Oregon," said Harvey.

"USC has this 'we run the west coast' type of deal. Oregon, they have this swagger with the uniforms. Everyone knows that. Texas, they're southern people who just love the game of football and most of those kids have no other thing in their life except football. Virginia Tech has all of those in one, and I think they're trying to get some kids from those areas to see that."

Two of the latest additions to the Hokies' staff, Hamilton and cornerbacks coach Ryan Smith, have provided a major source of interest for Harvey.

"Those are two great guys," said Harvey. "They reached out and called me and I had the opportunity to watch some film with them. And that was great because you don't get a lot of coaching pointers like that from college coaches."

Harvey is a self-proclaimed film junkie, so he ate the opportunity.

Harvey has an approach to game preparation that is well beyond his years. It's a mentality that was built through his youth football and training program, Premium Sports. Specifically, it was an 8th grade youth coach, Fred Lewis, that had the biggest impact on Harvey.

"He turned me into the animal that I need to be," said Harvey. "When I first got to Sierra at 14. They didn't think I would know the other team's receivers, but I came in and told them everything and they were kind of shocked."

That professional approach to the game is what Harvey thinks is his best attribute.

"I think people can take the game seriously, but they don't really think about what they have to do in that game," said Harvey.

"They don't know what they really have to do. I watch a lot of film during the week, so I know your tendencies. I will literally write you down in my head. So, I know if you love to run your in routes at this step all the time, when I line up like this, I'm going to bait you into it. So, I'm going to set you up in a way that you're going to have to respect it. It's all about film study."

That film study translates to incredible quickness to read and react. Harvey read the inside hook route below and baited the quarterback into thinking he had space and time to make the throw.

Moreover, on the next play Harvey remained disciplined and focused his eyes on the quarterback's head movement and kept the play in front of him while he dropped back in zone coverage. He high-pointed the football over a taller receiver and scored six.

On this next clip, Harvey demonstrates his cover skills that justify his ranking. He stuck with a speedy receiver and read his hips. Harvey showed great body control. He stuttered, stopped, then regained his speed in quick succession. Then when the receiver raised his head and hands for the ball, Harvey turned his head and body toward the quarterback and made the interception.

He's an incredibly smooth athlete. His movements are quick and fluid, and nothing ever appears labored.

Hamilton and Smith have communicated they're willing to put him anywhere on the field where he can make an immediate impact.

"They want to put me everywhere that they can to put me in a spot to succeed," said Harvey. "If that's playing safety, or playing offense, or playing special teams, doesn't matter. They want to do whatever they can to get me on the field. If that means I play nickel my freshman year, then safety my sophomore year, then corner my junior year that's fine as long as I can succeed and help the team."

Little undersized but has speed and skills, hopefully he gets a growth spurt and joins up

Probably needs to add some good weight (few don't coming out of HS), but 5'11" is the average height for NFL DBs.

Yeah, that size coming out of high school is fine. He can easily put on 10 pounds with college strength and conditioning. I mean, Greg Stroman was listed as like 5'10", 160 lbs. coming out of high school, and was probably 170-180 pounds once he saw the field, and by senior year, he was probably about 185. So I don't think it's unreasonable for DJ to fill out to 190 or so after a couple years in the program.

First, just want to say this is a really great article and I appreciate the time it took to put this together. Second, got to feel good about the new coaching staff additions putting VT in a position to at least compete for a player of this magnitude, that's impressive. Not getting my hopes up because it's a tough climb against USC, Oregon, and Texas but it'd be really awesome to get a recruiting win like this.

This is a situation where the dead period and encouragement to limit travel could help us. That Midnight Madness event that Coach Beau put together was incredible. Hope we do it often.

I really appreciate the work that this staff is putting in to try and increase our national brand and perception. We still want to win recruits regionally, but we also want the best players who will make VT a better program, regardless of where they're from (even friggn FRANCE)

and i echo the sentiment regarding the article -- thanks for the insight, sam!

Man, clip C was insane for a high school kid. I bet that receiver torches most kids with that move which is probably why the QB locked in on it

I texted my friend when I first watched it, that's the best interception I've seen on film in 2+ years of doing this. That's a Kendall Fuller play right there,

Not only was the WR filthy, the QB looked off the safety before coming back to that route. Probably assumed his guy would be all alone.

Sam's right, that was a Kendall kind of play.

Oregon will have individual saunas and hot tubs in each locker by signing day 2021, so that is going to be a tough hill to climb.

This kid would be a tough get, but he's very instinctive, and I love that he's a film room junkie.

If it were up to dad then he'd probably already be in O&M. Dude loves him some VT

I've learned to never pay any attention to a recruit's father, good or bad.

I don't know. Maybe it's wishful thinking, but something about his comments sound to me like he's a smart kid with a fairly strong father's influence and wisdom.

He's very smart and articulate! I'm sure his father is hyping up his son and guiding through a life decision like any kick-ass dad would, which is awesome. I've just learned to not put too much into tweets or comments by someone that close to a recruit unless it's a sure fire fact that was told to me directly. It is though a good sign when the parent seems interested in Tech.

Is there a connection there? or just learned about the school during his son's recruiting process?

Great work Sam. I would love to land Harvey and Riley.

Crystal Ball in for him to the good guys. For what it's worth in May....

It's from the top expert on West Coast recruits as well.

"Expert" when used in combination with sports is laughable.

Insider work better for you?

I don't put stock into crystal balls unless they are within about a week of the decision date - because the evaluator can change them at anytime before hand and it doesn't penalize their prediction rate. So for better or worse, enjoy a CB when it comes in, but don't put too much stock into until a decision is actually imminent.

Would be nice to win a recruiting battle for a high level recruit on the West Coast like Harvey. Could be the start of something BIG!

Anyone know how hard we are going after 5 * OT Tristan Leigh outta Woodbirdge, VA? I would love if we could start to gain traction with in-state high profile players.