The massive 3-star tackle has surged up Virginia Tech's recruiting board. 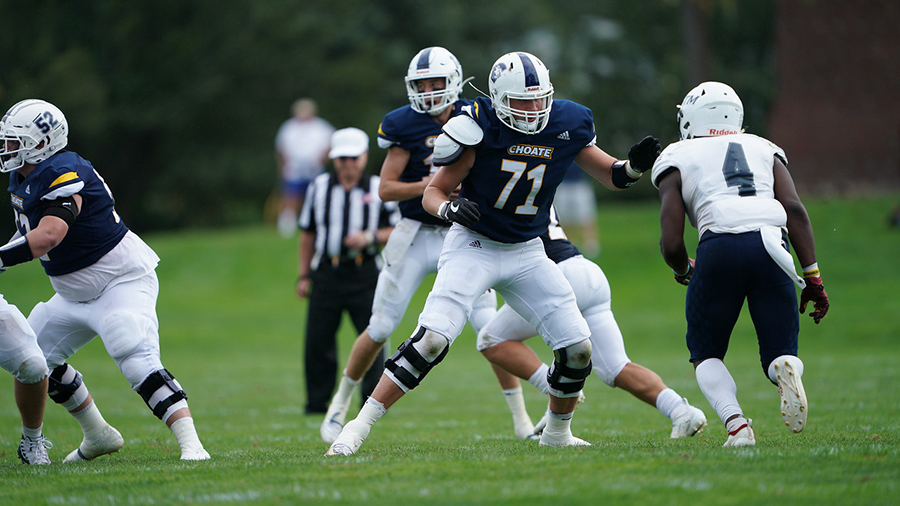 It's hard to imagine overlooking someone who's 6'7" and 285 pounds, but that's exactly what happened to Tristan Bounds.

The 2021 tackle prospect, originally from Bethesda, MD, was playing at Episcopal HS in Alexandria, VA, but he wasn't receiving any attention from college programs. He was going into his senior year with no offers. So, Bounds made the decision to reclassify into the class of 2021 and play out his eligibility at Choate Rosemary Hall in Connecticut.

For Bounds, the decision made sense.

"I had already gone to a boarding school, so that part was pretty easy," he said. "I also wanted a good education. So everything really pointed to Choate."

Bounds was offered by the Hokies on January 16, and they made the cut in his Top 8 along with Boston College, Notre Dame, Michigan, Maryland, Texas, Virginia, and Vanderbilt.

Bounds really started to make a name for himself during the camp circuit last summer.

"Just getting to camps and demonstrating my game really got the recruiting rolling," said Bounds. "Then going out and putting it on film in the fall really rounded it out."

This past fall, Bounds rocketed up the recruiting boards. The guy who was once invisible to Power 5 programs now ranks as the 56th best OT prospect in the nation per the 247Sports Composite (3-star, 0.8628).

Bounds was primarily a basketball player growing up. His sophomore year, however, he decided to focus more on football, and spend more time in the weight room.

"He's got excellent athleticism," said Choate head coach LJ Spinnato. "I think his athleticism is on par with anyone at Choate. The thing with him is he's an offensive lineman, so he's got to get that strength to play low and roll his hips and become a more polished blocker."

Part of the slow start in Bounds' recruitment was his film didn't convey the accustomed dominance from a prospect his size. His technique was suspect and he had a tendency to stand up at the snap and the ball instead of staying low and driving with his hips into the block.

"It's hard to be strong when you're that tall without fully committing to weight training," said Spinnato. "The reason, outside of his work ethic and his character, that he's such a national recruit is that with that mindset and character he's going to put on 60 something pounds and be a stud."

While at home this spring, Bounds has been doing his best to keep up with a strength program. Without access to any gym, Bounds had to get creative.

"I built a weight room out in my backyard out of lumber," said Bounds. "So I had a bar and some weights, and I built a squat rack out of some old lumber and then built a bench and a pull-up bar." 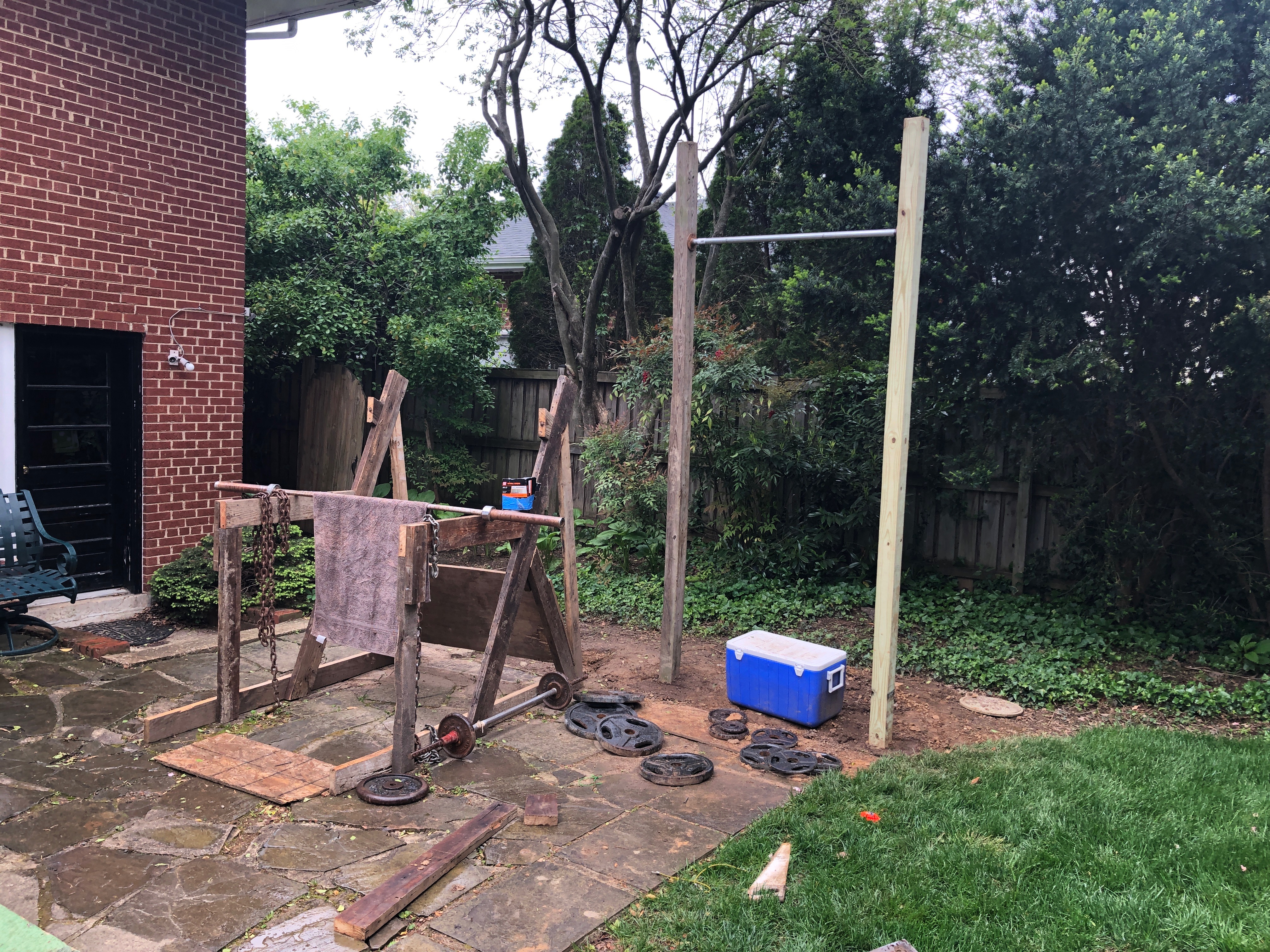 "Tristan's on a bit of a different workout routine than most of our players," said Spinnato. "Our guys have a body weight workout routine that was given to them by our training staff. Tristan is doing that as well as some lifting just to continue to grow muscle mass."

Spinnato can remember when Bounds started to put it all together last fall, during a tough Tuesday practice in the middle of the season.

"It was in preparation for our week 4 opponent, Brunswick," said Spinnato. "And Tristian had not been playing well, and we kind of put the screws to him a little bit. We had him and another offensive lineman, who were not performing very well, line up and go against some of our better defensive players for about 10-12 reps in an Oklahoma drill type scenario. Halfway through those reps he really started to put it all together and listen to the coaches. Those last 6 or so reps were pretty dominant. And then from there, the tape really took off."

One of the major attractions to Virginia Tech for Bounds is his relationship with offensive line coach, Vance Vice.

"He's a super down to earth guy," said Bounds. "There's nothing fake about him. What you see is what you get."

The Hokies have stiff competition for Bounds, but if there's one guy in Blacksburg who's been able to close the deal on big recruits, it's Vice.

"The atmosphere is awesome," said Bounds. "I grew up watching a lot of Tech games and my mom used to work there, so I was familiar with 'Enter Sandman' and all the traditions."

Because he's so tall, I initially wondered if the hoop was lowered.

Love this, thanks Sam. That's quite the frame, similar to Luke Tenuta coming out of high school.

To clarify, did he reclassify up or back? Is his year at Choate basically a FUMA year or is he graduating early?

He reclassified back, so last fall was his "second" junior year of high school as he put it. Choate is just a private school, and in Connecticut you have 5 or 6 years of eligibility on varsity teams, where in most states you only have 4 or 5.

Love it. Let's lock this guy up, gotta win in the trenches!

I have a huge amount of respect for all these athletes trying to keep up with their strength and conditioning under quarantine. It is so much easier to push yourself when in a group.

And it absolutely is...

Damn I have never heard of such a thing as reclassifying backwards to get more looks, pretty mature decision and if he is taking AP level classes will help him with his college schedule. If he can ball hopefully we get him.

It actually happens quite frequently, at least up around here. I know of a few local athletes who have transferred to private schools in NE that were 'required' to stay back one year. Tabor Academy up here in MA is well known for doing this with a lot of athletes that transfer in, including one now finishing up her senior year @ UConn.

It's becoming more popular. Especially with how regularly guys are leaving as juniors and now more and more colleges are having "accelerated" online programs for athletes and other students. I think it's also really beneficial for someone like Tristan Bounds who has a whole lot of body to build into. He'll show up to a campus ready to compete for playing time now as opposed to being a pure project player.

Isn't this essentially the same as taking a year at FUMA or something similar? They get an extra year of development and then come to college with a full set of NCAA eligibility.

I could be wrong, but the only reason I remember previous recruits spending time at FUMA was to get their academics in order. Choate and other elite, high cost academies are generally for the rich and/or high achieving student athletes.

Went to HS and played with a guy who made good grades and accepted a scholarship offer to play D1 (I think the scholarship offer came after his sophomore season). During his senior hear of HS, he was asked to perform poorly in school in order for them to send him to FUMA for a year of physical development. Does anybody know if this happens regularly?

Not sure, but every football player at Army used to have a prep year (not sure if still true). But you dont need bad grades for a prep school. So it sounds fishy.

Christiansburg High School used to do this all the time (and they still might). I did my student teaching there and the wrestlers were normally older than their peers.

Just curious if you are paying that kind of money to go to a boarding school why you couldn't fork over a grand or so to get a decent workout system or some better equipment, especially considering that you have a lot on the line as you work towards an athletic scholarship at a P5 school. I didn't grow up rich by any means, and definitely couldn't afford to go to any type of parochial or boarding school, but at least had a basic weight set and bench press setup in my parent's basement. I don't get all this "innovation". It's 2020, not 1920.

Probably didn't expect to need that sort of equipment at home until it became more difficult to get it.

Dude I have been scowering amazon, ebay, etc for non price gouged workout equipment since this mess started. I have lost more than ten pounds since I cannot workout properly with more than body weight stuff and my kids moms 15 lb dumbells. I imagine it is even worse for professional and semi-professional athletes.

because building a squat rack out of plywood and old 2X4's is badass.

He could be on scholarship. There are a lot of athletes that get recruited to private high schools and then get free tuition or it's heavily discounted. I know because I've helped several of my former players research these schools.

That is true. Just like colleges, not many people pay the full sticker price for private schools (except those students coming in primarily from Asia, and many private schools rely heavily on the international students tuition income to survive). And, if these schools want and recruit you, they will find a way to get you there.

Tristan Bounds in a recent interview Brad Franklin, Publisher of CavsCorner on Rivals.com:

on what he liked about Virginia Tech
"I really like Coach (Vance) Vice and Coach (Justin) Fuente. I was born in Blacksburg, so there's like a small hometown pull there. I'll say it again, we'll go 8-for-8, but it's a great school. I really enjoyed my conversation with one of their business professors and I felt really comfortable with their staff."

on when/how he'll make his final decision
"My plan right now is to get as much information about these schools as I can and the way it look, I don't think we'll be able to take visits in August and we play games on Saturdays. So, I'm pretty much going to make a decision without any official visits. I may drive to come places and see some stuff like that and just see campuses, get a feel in that regard. But I think I'll make a decision sometime before the season, I don't really know when."

He also stated that he doesn't plan to cut his list down anymore and won't make a big deal out of anything. Says he'll commit, and that'll be that.

A plus for the Hokies could be that the campus is within about a 4 hour drive from Maryland. I'd imagine it would be a bit more challenging for him to make the trip to Ann Arbor, South Bend, Austin, or Nashville and not have any sort of recruiting visit available when he got there.

note: the interview was not behind a paywall

Ah probably makes sense in the larger context of the interview. Thanks!

Kid seems like he's got a good head on his shoulders.

Tristian is Bounded to be a Hokie, amirite?