On August 18thHokieSports.com announced Virginia Tech would be one of ten schools outfitted with Nike Pro Combat uniforms.

Nike worked diligently with each university to bring relevant elements of the school’s rich heritage into the futuristic elite fit uniform designs. The collaborations with the universities produced the highly customized uniforms that will be revealed just days prior to the start of the 2010 college football season.

Below and after the jump are two picture of the jerseys and team shirt. 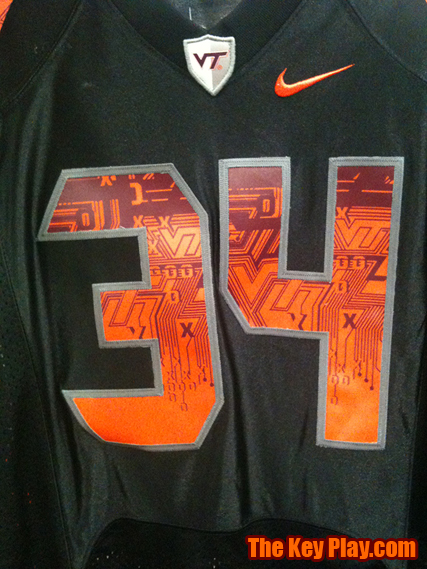 Ryan Williams will look dapper toting the rock in anything. 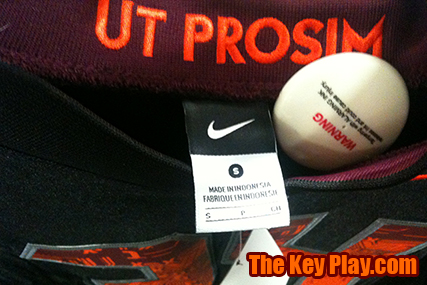 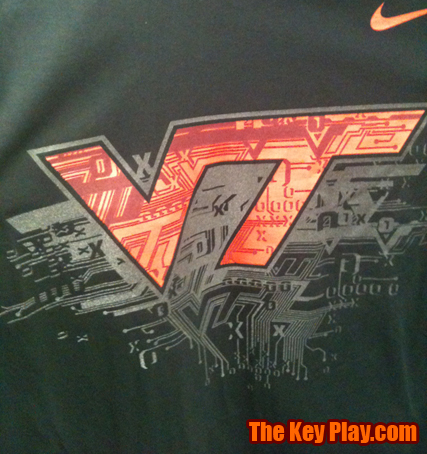 Like last year's jerseys "Ut Prosim" is stitched into the collar, and that along with the shield are the only two things I approve of. It looks like Nike brought in Intel for consultation to help with the numbers as they look like an orange circuit board. I don't even know where to start with the black... We must have turned heel after Summer Slam, because "Good Guys Wear White." I'll leave it at this... We have one acceptable primary color, Chicago Maroon. I can't wait to hear how Nike is going to rationalize the black.

Kyle Tucker twitpic-ed the entire uniform. If you were to remove the VTs would you know this was a Hokie uniform? I wouldn't, and that's my biggest gripe. Maybe I'm no longer hip and trendy.

Now the only thing left to find out is when we are going to wear them. Some of the players already have them in hand if that means anything... And for those of you who can't read into things, that means we're wearing them against Boise State.

Here are pictures of the cleats, gloves and helmet from the Nike unveiling. 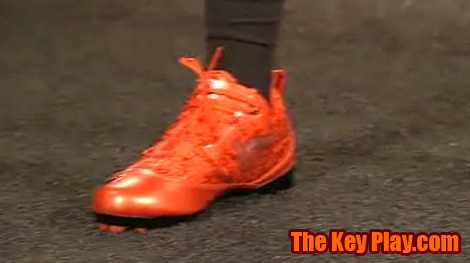 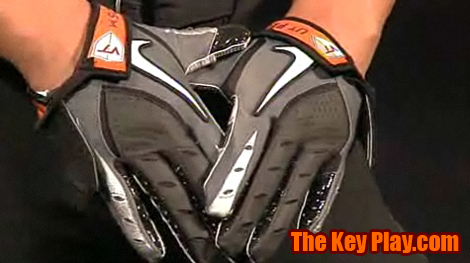 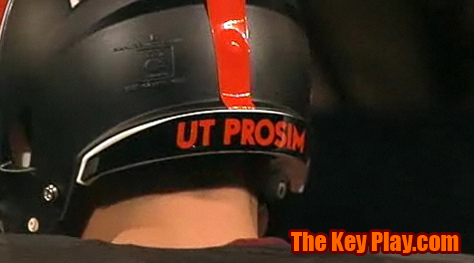 Beamer Ball has a picture of Tyrod and Graves styling and profiling in 'em.

This is terrible, this idea.

Kyle Tucker brought up a good point that these types of things help sell the program to recruits, but I still don't like it. Namely the maroon stripes on the helmet (you can barely see them) and the stupid orange graphics. Nothing good usually happens when we wear orange. I have to believe that we wouldn't wear these for the Boise game...I hope.

Didn't Beamerball.com release a while back that we would wear the maroon tops with white pants? I have to think that with the guys wearing those for ACC media day and all of the VT appearances that we would go with those for the national broadcast. Again, the last time we wore those...

Well I just read they are going to wear these pro combats in the Boise State game...not liking this idea

We're going to be the worst dressed team to win the National Championship.

I'll probably be the only one

admitting this: I don't mind the new uniform at all. It isn't awful. Beside, if you think about it, our original school color scheme is black and gray, before current chicago maroon and burnt orange. So it's black uniform, orange/maroon numbers with gray lining. So what? Essentially I have too much confidence on our team and excitement for the upcoming season that I wouldn't worry much what they'd be wearing on the field.

Your point is valid, but I still wish they'd look a little cleaner. The numbers are pretty holographic looking. As long as we win and the players are happy wearing them, I shouldn't care.

Oh, I can't remember if I mentioned it, but your avatar is awesome.

Seriously? Are you f'ing kidding me? Hello, Nike and VT, are you listening? WTF? Are there any more letters i can use to exclaim my dismay at this uniform without using all the swear words in my vocabulary (note: I have a limited vocabulary but not when it comes to swear words)? The official colors of Virginia Tech are PMS 208 (Chicago Maroon) and PMS 158 (Burnt Orange). Sure you can throw white in there due to playing a team with a similar color scheme but the majority of the uniform should be made of these two colors. Now maybe the combat uniforms do conform to the standards set forth by the university. Due to wine consumption this evening I can't decipher what the Virginia Tech University Relations Site on Branding has to say.

This uniform is awful. First, some Hokies do wear combat gear. Currently they are desert camouflage worn in Iraq and Afghanistan and other parts of the world. Hokie football players wear uniforms. Please someone from the Corps of Cadets tell Nike that. (Remember Kellen Winslow saying he was a soldier?).

Second, I agree with wondering what the hell inspired the design inside the VT. Maybe Intel had a hand in it. Or maybe the movie Tron did. The original one with Jeff Bridges to you young people. I am way out of touch with what young people are wearing but I could see this jersey being worn by Shuan White when doing a Double McTwist 1260 in the Olympics, not by a football team trying to win a national championship.

Now if the players care or like it, I guess wear it, I guess it is up to them. I just hope they know that this graduate and fan hate, hate, HATES this uniform.

Boise was on the list to wear Nike combat unis at some point this season. When I read that, my first thought was that they would have both Tech and Boise wear something special on Labor Day.

Just because Duke started wearing black in basketball doesn't mean EVERYONE has to do it. Not only is the black ugly, but these numbers are worse than last year.

more maroon would be nice, but they could play fast and badass in all black.

I don't really care that our color were black and grey sometime in the 1800's. As Seattle Hokie stated, our colors are NOW Chicago Maroon and Burnt Orange. Not a fan at this point. However, if we kick some serious Boise ass in it, I may reconsider, but as I am no longer hip or trendy either, I still think we should stick to actual Hokie colors.

I think people are panicking a bit here. For me, it's not about what a close up of the numbers look like, its about what the uniforms look like on the field. I think the twitpic posted should put us all at ease that our entire team isn't going to look like they are wearing circuit boards, they're going to look like they're wearing black uniforms. I'm not super excited about that, but worse things have happened (hello, orange pants????).

Let's all just relax and think about more practical things, like aren't they going to be hot in such dark jerseys and helmets? That worries me more than fashion...

...just in time to knock the Bronco's down a few pegs.

Say what you want but these are awesome. Just win on Monday night and everyone can jump onboard later.

...make everyone love them, or at least tolerate them, I do believe.

plus RMFW is going to look awesome murdered out.

recruits will think this is hot shit.

Can VT opt out of the "honor" next year. Last year wasn't bad, but this year is horrible! Well better than Miami "look at me I'm an orange"

By the way...what changed on Florida and Bama's uniforms? They look quite similar to their normal jersey...

I think the big difference in those is the textured look. The Gator one kind of gives them scales. Honestly I think Tech's are the only ones that are really super different, WVU is close with the coal dust look, but not quite as ridiculously different. Then again, I'm not a huge fan of massive amounts of orange on Tech's stuff anyway, a little bit goes a long way. On the other hand, the maroon strips on the front of the helmet look pretty sharp.

Hate me and the new uniform, but I think it's pretty badass now that I've seen all. Let the season begin!