The Hokies took down the Clemson Tigers on the road on Tuesday with a surprising show of defense and rebounding for such a young team, as Coach Young brings 10 new players to the floor this season. A dominating performance from Landers Nolley and great supporting efforts from Alleyne, Horne and Bede helped the Hokies move to 1-0 in conference before moving on to their out of conference slate. They open that slate at home this evening against Coppin State.

Coppin State is coached by former Maryland great Juan Dixon, who also had a seven year NBA career before finishing with three seasons in Europe. As a coach, Dixon was the women's head coach and the University of the District of Columbia for the 2016-17 season before becoming the Coppin State head coach in 2017. He is 13-53 as the Eagles head coach with only five wins in his first season and eight wins in his second. It doesnt help that to make budget they essentially rent out their entire out of conference portion of the season which puts them 12 or 13 losses in the hole. They did manage to finish 7-9 in conference play last season in the MEAC.

Coppin State started the season with a 91-84 loss to Rider. They also had a dominating performance from a single player as #2 Senior Guard Kamar McKnight scored 24 points, 4 rebounds and 2 assists. Unlike the Hokies, the Eagles have a very short roster in terms of those playing minutes, as five players played 30 minutes or more, one just over 20 and the rest just breather minutes for the starting five. Guards #13 Junior DeJuan Clayton and #0 Senior Aaron Robinson scored 17 and 15 respectively in support of the Eagles overall effort. Guards #14 Senior Andrew Robinson and #10 Junior Koby Thomas scored 9 and 7 to essentially round out a five guard starting rotation. They do have a center that contrbuted 8 points in 21 minutes and that is #35 Sophomore Brendan Medley - Bacon.

If the Hokies come out the way they played against Clemson, this should be a double digit victory but Coppin State does have an experienced roster, which could prove a little challenging for these young Hokies. Hokies win 88-72. Hopefully most of you get to see this one. Not sure I am going to make it out somewhere that has the ACC Network to see this one.

I know we try to refrain from play by play but could someone post the game time of any huge highlights so us without ACCN can look them up later?

Still waiting on my feed to go live

Not sure why, but I'm actually really interested in this game.

I guess it's because the win against Clemson has made me re-think what this team might be able to accomplish this year. To go on the road and beat a decent ACC team in the first game of the season, with what has to be just about the youngest team in Virginia Tech history, is making it hard for me to keep my optimism in check.

Always nice to see what ingredients we have in the cupboard.

What a start. This is our answer for when Nolley has an off start. Play coppin st

Okay so this team is focused and locked in.

Starting hot from 3 . Nice to see 16 pts coming from people not named Nolley

I hate not being able to watch this living in Bethesda. So annoying... if anyone has a link let me know.

Do you have ACCN?

My apartment complex only has comcast, so that's a negative.

Are you messing around or is it on? I'm not getting it on ACCN (nova).

If you have ACCN you can use your provider login to watch it on the ESPN app.

Got it that way. Thanks!

It's playing the Duke game for me.

25-3 at the 10 minute mark. Nolley still hasnt scored, but the other players are more than making up for it. The stifling defense continues and Tech again outrebounding the opponent, so far 16-10.

Things have stalled on both ends for both teams, down to the 745 mark and so far Coppin State shooting a whopping 5.6% from the floor.

When will we see them get more than three points?

Nolley gets on the board with two free throws to make it 27-3 at the 7 minute mark. Coppin State follows that with their second basket. 27-5

So when do we offer Medley-Bacon a scholarship?

A real missed opportunity that his name isn't Bacon-Medley instead. Who wouldn't want a bacon medley?

When he learns to play basketball.

33-5, I can't remember there last time VT basketball saw a scoreboard that looked like that. I don't care who you are playing

Coppin State on a scoring tear in the final minutes. 35-12

First 5 minutes were lit the next 15 not so much

Agreed, but I do think Coach is just messing with his line up to see what works and who has chemistry together.

Great to see CMY playing everyone. They all need to get minutes to get better. But the scoring really dropped off with the second unit.

I thought UVA holding a team to 19 in a half was ridiculous. 12 is insane. Granted they played Syracuse, but whatever. . .

Watching a VT hoops game and they keep talking about Robinson and it makes me sad.

Who do we appreciate 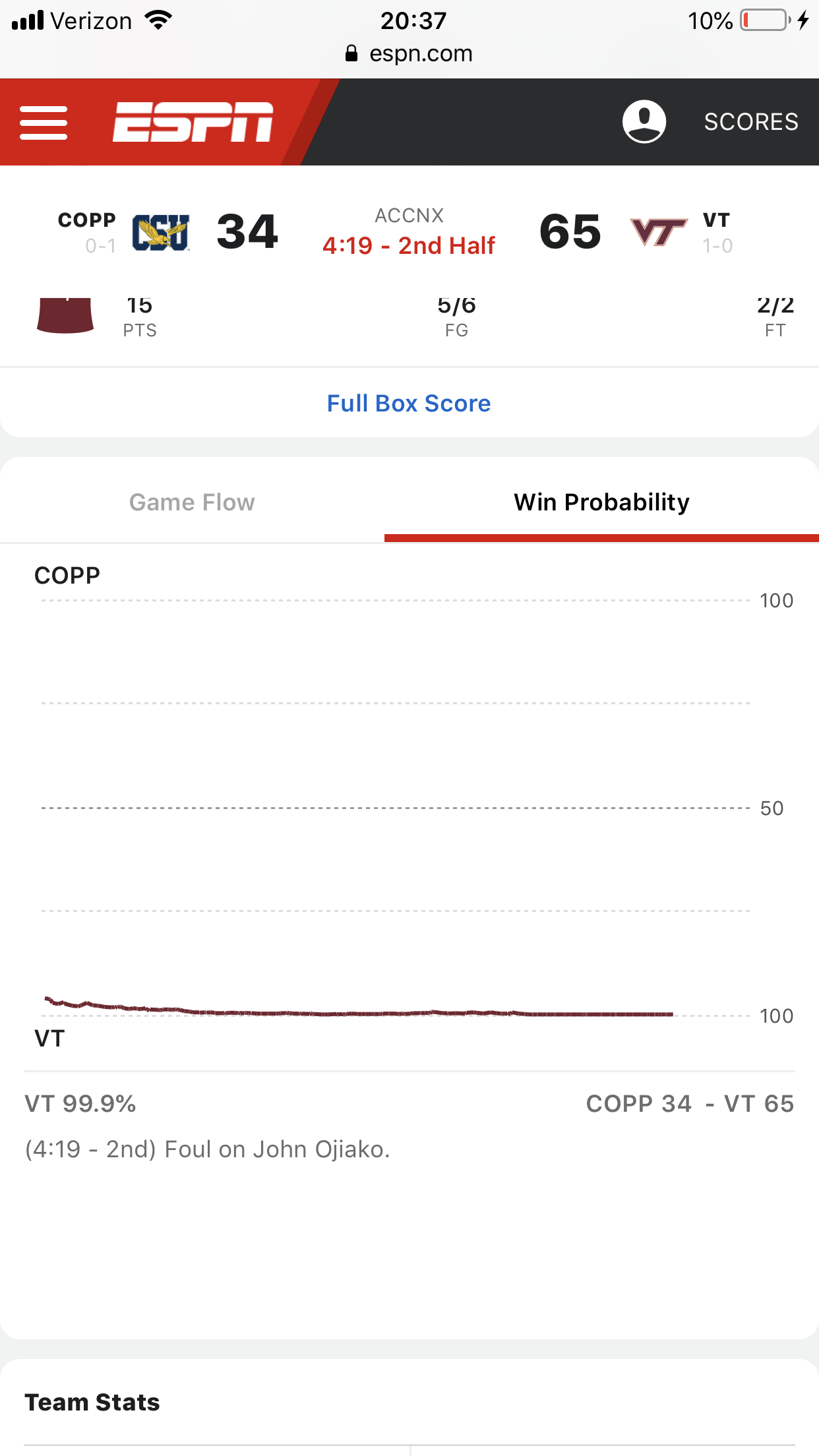 Your phone is at 10%. I have bp issues from that

So got YouTube TV for game tomorrow but still can't watch ACCNX , what was the point of the ACC network If they made it even harder to see games?

YoutubeTV login should get you in ACCNx on the ESPN app. That's what my brother is using.

It says unavailable on both YouTube and ESPN app.

That's unfortunate. I wonder if it is different in various locations. Are you logged in with YouTubeTV as your provider in the ESPN app?

ACCNX has always been either the RSNs or cast the ESPN app. When you're relegated to 'the extras' it's kinda like being on the ocho

I have been very impressed with Alleyne. He can shoot it. Radford played surprisingly well for a 2* guy. Lots of hustle from him.

I like the scrap from both of those guys

Pretty sure once he gets comfortable, Cattoor is going to be a major piece of this team.

Yea, he showed some aggressiveness tonight. Had a nice drive to the basket. Really fought on d a could times to pick up loose balls.

Kid plays his nuts off

Cattoor is a scrapper. He was diving after balls and made a bunch of smart plays.

So Juan Dixon huh? That was a blast from the past

Something that might not have come through on the broadcast feed, when the score was 25-3 (I think that was our score, they definitely had 3) the students started chanting "let them score, let them score....

The hokies responded and CSU broke through to 5.

"They're not good, but they doubled down on it by playing poorly." -TSL Podcast 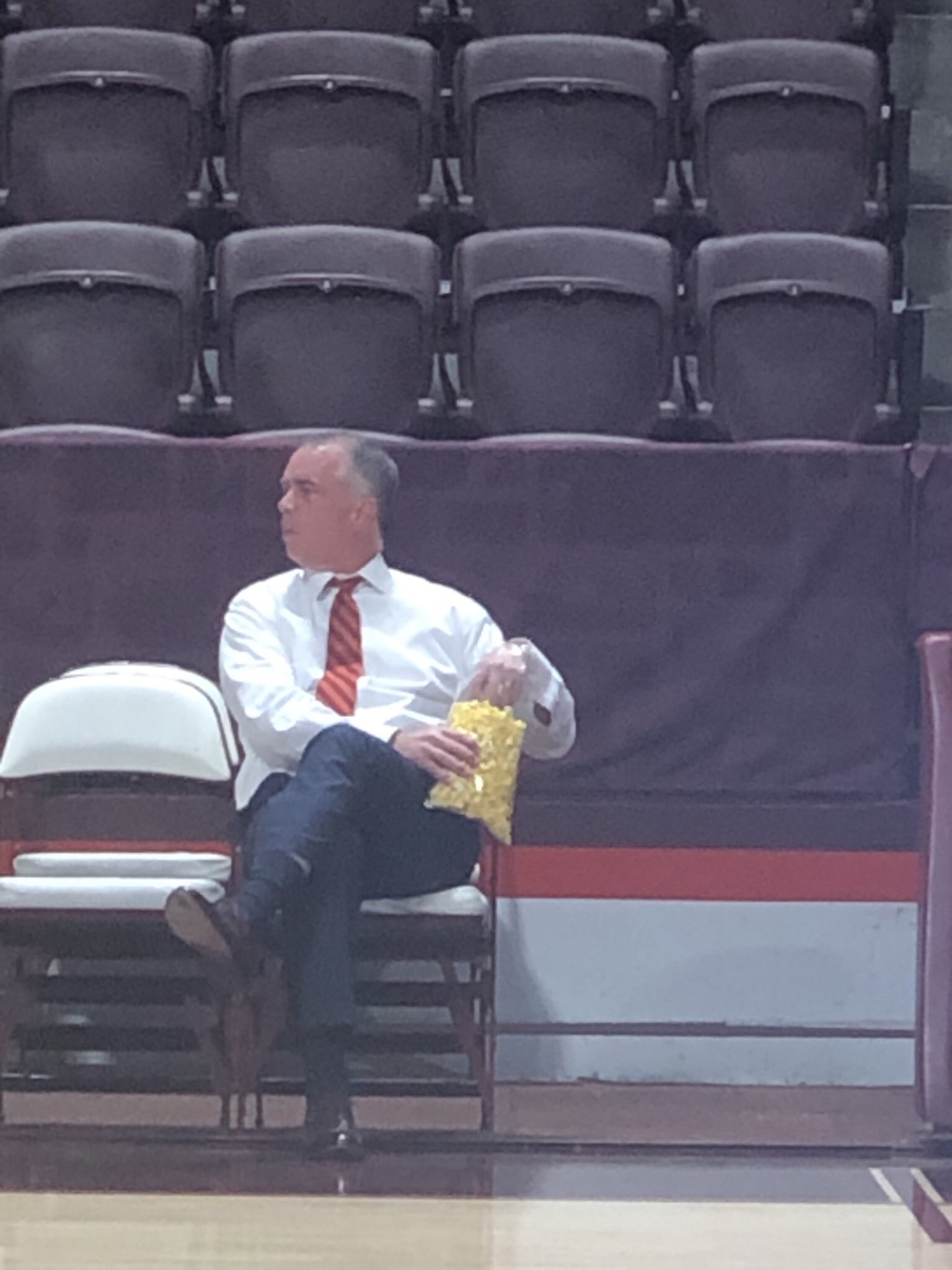 When is this from?

Lol a guy posted it on Reddit without any real context so I'm not actually sure. It just made me laugh.

Out rebounded a team again. Gotta love the way they have crashed the boards the first two games. Bede led the team again with 9. Haven't looked, but he's gotta be in the top 10ish in the ACC in rebounds per game....not bad for a 6ft pt guard

If Bede had played more than 22 minutes, he might have made a double double the hard way. 9 rebounds and 10 assists.

Operation: Move Basketball Forum So It's Under Football Forum!

I LOVE the duo of Cattoor and Radford off of the bench. Their energy was fantastic. Those two in particular play so damn hard.