In the Nick Saban era at Alabama the other SEC schools agreed to pay $167 million in buyouts for head coaches. Saturday Down South.

Thats 163 total seasons coached against Saban, so that means that each SEC teams has on average agreed to pay over a million a year for coaches to not coach.

I say agreed to pay because if a coach gets another job then the payouts are lowered based on the pay of that job. So what the schools have paid should be less. However, no Vandy payouts are in the $167 mill number because they are private (which is just Derek Mason's buyout).

Currently 9 of the SEC coaches have $10 mil plus payouts on their contract.

What is impressive is that there were 28 coaches fired, another 9 that retired, resigned, or left for new job, so that is 37 coaches for 163 seasons or 4.4 seasons per coach. The all time average for coaching tenure is 4.88. So these coaches aren't being fired willy-nilly comparatively, just slightly higher than average (also not including Saban hurts the average). So the SEC is spending dead money at an alarming rate.

One Million dollars a year would allow VT to get million dollar coordinators. The SEC is just pissing it away.

So the really fun interesting part (using adjusted for inflation numbers) ...
Auburn appears to get more money donate the year they fired Tommy Tuberville. They did not see increase contributions for winning the National Title. They did however get more money under Gus Malzahn after his SEC coach of the year award in 2013.
We can look at UF the same way. McElwain won SEC coach of the year and brought in 9 mil more in donations. Muschamp saw a bump with his SEC CoY award. Though Muschamp saw more donations the next year before UF reverted to mean. In addition, UF made a huge jump in the average donations from 2007 to 2008. Since 2008 they have held steady except for a couple of jumps.
Now Ole Miss, their contributions have increased since 2005. They had a big jump in Huge Freeze's 2nd year, but they kept rising for the first two years of Matt Luke's tenure and he didn't do well.
Arkansas saw a bump in contributions with the hiring of Petrino but it has been stead since. John L. Smith and Bret Bielema didn't derail the giving.

Contributions didn't look tied to national titles or winning. Lots of SEC schools seemed to get bumps in the late aughts. If some one has a way to data mine the knight commission data (or that the download data button will give me all i want) let me know. I would love to match this up with all the coaches to see if I can find any linkage tied to coaching hires and fires. Cause right now it just looks like these schools are pissing away money chasing more losing as Ed Orgeron is now the only SEC coach to beat Saban.

It's interesting because it's good that they don't put up with mediocre football (sigh) but the downfall is the outrageous contracts they sign these guys to that don't pan out after 4 seasons.

They don't put up with good football. Les Miles was winnimg 72% of his games. Gus Malzahn has a 67% record and is 3-4 against Saban. Richt had 74% winning percentage

Vandy, Tennessee, Arkansas, Miss st, USC would all would love to be mediocre right now, they're all bad (Arkansas did look better this year but they have been terrible for a while).

Who really has turned their program around in the SEC? The programs that were good before Saban are the ones that are still good, and all of them have fired a coach. The ones that were bad are still bad. Tennessee has gotten so so much worse. Arkansas was much better before Saban too. Hugh Freeze and Dan Mullen made some progress, but Ole miss and MSU have reverted back after they left.

Are you saying you think Saban has something to do with it or is that just your benchmark for your time frame? Just wonderin'

I think the fanbases within the SEC all think they can compete on a national level and anything less than numerous national championships is grounds for dismissal, because of what they've seen at Bama.

That's not usually true in the other conferences.

Take us for example. Lots of people want to get rid of Fuente, and hardly any of them have said "cuz he ain't keepin' up with Bama!" Most people are mad because they don't feel like he can reliably put us in the ACCCG, and that if we can't get there, we have no business worrying about Clemson.

An equivalent SEC team may want to fire their coach for similar reasons (not being competitive enough within conference play), but because there are usually multiple top-10 quality teams in the SEC, firing someone for not winning their conference is essentially firing somebody for not making the playoffs.

The article was about buyouts since Saban so Saban is just the time frame. I believe he is also the cause but have no real data.

I have been working on getting data about coaching turnover, but I don't get a lot of time to play. I have every record of every coach for every school in a database and I am working on that data. I have a number of graphs I want to produce.

Gotcha. Thanks for pulling this together!

Great write up! This was the most fascinating part:

not including Saban hurts the average

It's going to be fascinating to see what happens when Saban retires. Will coaches be fired at a slower rate (in the SEC at least)? Will salaries go down? Will someone step in and fill the void, or will we see more variety in the teams who qualify for playoffs/win nattys?

If some one has a way to data mine the knight commission data (or that the download data button will give me all i want) let me know.

The download will give you everything you need (for public schools at least):

Thanks for the reports link, i have the data, so time to ingest it into a database so I can work some magic.

P.S. i have way to much college football data on my harddrive.

Can't wait to see what you do with it!

Don't hold your breathe, it's going to take some time because the data isn't nice. Names have had to be correct to match (easier than writing the software to understand that Miami University and Miami(OH) are the same but they are University of Miami)

The other issue I am running into is that i can't just get nice clean data to graph because conference alignment really screws things up so i have to do a lot of software to handle that instead of nice easy sql table joins. So that is taking longer.

Also some data overload in how do I want to show results. But that is just me thinking through the problem, which is the last thing I do, first step get data, check!

EDIT:
here is a quick, dirty tease
A&M hit it hard when going to the SEC
UGA has been begging for moneys hard since they fired Richt. 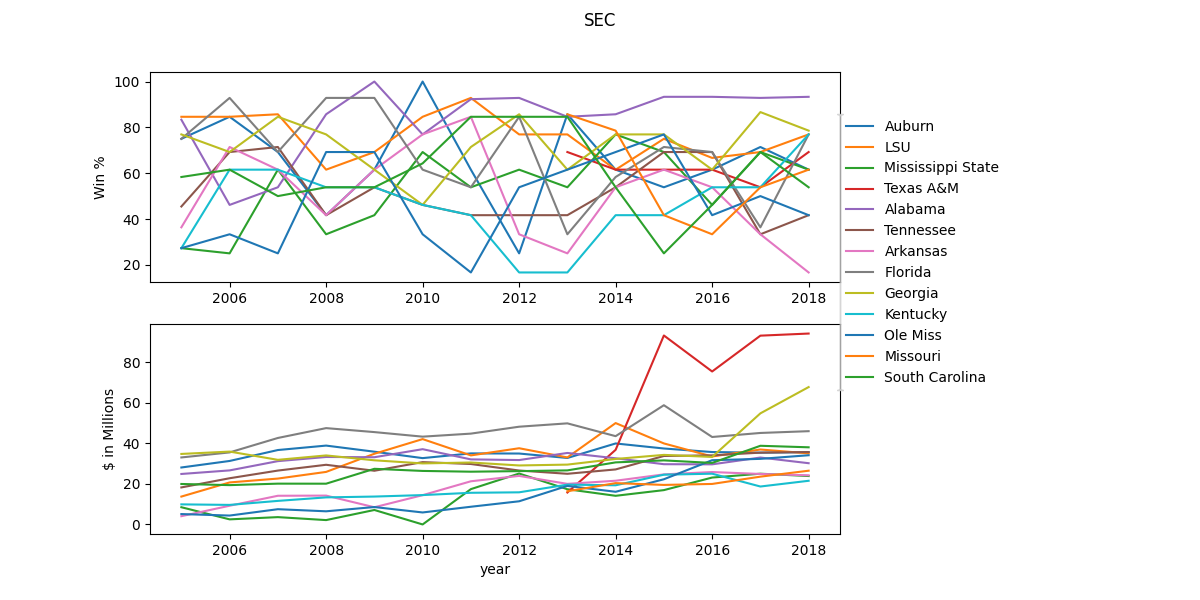 Also, have you thought about doing a 4 year rolling average for wins, or some other method to smooth out the win %? It's kind of hard to takeaway anything other than Alabama has done better than everyone else since 2014.

This is just where I got to last night in getting the data usable. I am no where near the final product, which is why is said its going to be some time until done. I really want to put coaching changes in the graphs too.

Where do you get your data? I'm on an interesting project at the moment that allows me to spend a large portion of my time creating graphs.

Win data is from sport-reference

It's how the most prominent booster feels on a given day. Sitting with USCe grads at work, they knew long before the season they'd have a coaching search by their booster connections. It was not a matter of if, but when. A CFP appearance might have bought another year.

Haslam has railroaded the Tennessee program.

Tx A&M has oil money in the biggest and baddest of ways. You don't just shell out with a full deck for Jimbo Fisher. And it's taken a few seasons for his success to materialize.

Orgeron could get fired next year if he has another down year. Even Les Miles couldn't stay out of the firing squad with a national title.

Mother Jones made a list back in 2014 of some of the top boosters in CFB. Obviously needs some updating, but the article is still available.

Even Les Miles couldn't stay out of the firing squad with a national title.

I'll defend the Les Miles firing. He literally refused to adopt anything mildly modern on offense. When a coach (or any employee for that matter) shows that they absolutely refuse to adapt, or work on a weakness, it's time for them to go. Coach O was able to correctly diagnose the problem. It took him three years to find the right OC, but he did. It might take another year or two to again find the right OC, but he will.

Also, LSU is returning a ton of talent, they'll be fine next year.