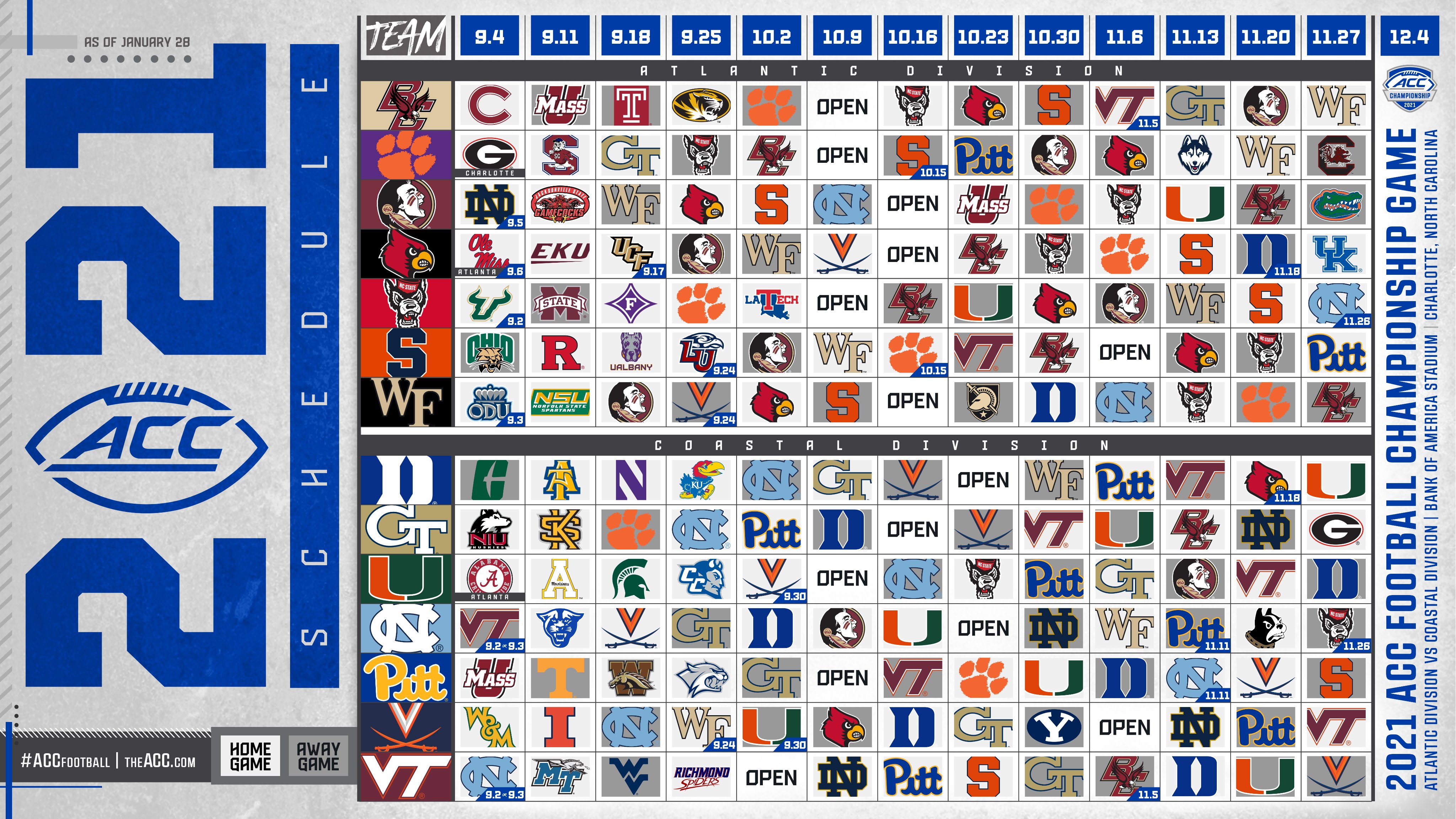 Yay now I get to set in my calendar the days I have to fix the holes in my wall from throwing things. I can have sheet rock and mud at the ready.

They also announced a schedule last January. We saw how well that held up...

Seriously, though, I saw a tweet that said that the ACC is planning on going with their original configuration for the 2021 schedule, so back to 8 conference games and 2 divisions.

Think we're gonna open on Labor Day with UNC. It's either them or BC and I am thinking ESPN will want a premier Labor Day game.

As far as I can tell, there's still two Chick-fil-a Kickoff Games scheduled for opening weekend 2021 - Alabama/Miami on 9/4 (Saturday) and Louisville/Ole Miss on 9/6 (Monday).

Now, it is possible they want an undercard on Labor Day leading into the CFA game.

Way more optimistic than I am. Threw up saying that.

Predicting that many wins before seeing the schedule? Bold Strategy Cotton

we've been hovering around .500 for the last 3 years. I think it's safe to assume another .500 ish performance

Bold Prediction: We are the Coastal's sacrificial offering to Clemson this year.

Permanent Optimism is a hell of a drug

Recently I've been asking myself if there's any realistic why we win 10 games next season. I can think of one realistic way this happens:

Each of these are possible within reason, and I can see one or two of these things happening, but I'm not confident all 4 could happen in one season.

Honestly, you think about it though and who in the coastal really scares you? UNC is soft up front on defense and has to replace their WRs and RBs. Depending on when we play Miami, King might not be ready. Duke and GT suck, Pitt might be good and I have no idea what UVA brings back. Obviously, we're not exactly world beaters, but there's a path to 10 wins, though I think 8 is more realistic.

I think if the line is at least solid we will be pretty alright again on offense. Big question for me is if we go from sieve to at least passable on defense. Defense needs to be in the 30s for us to have a shot.

Trivia Question #2: Besides Clemson, who is the winningest program in the ACC since Fuente took over? VT

I know some people will probably dislike this, but sometimes it a'int as bad as it seems.

It's pretty bad. The ACC is currently Clemson and a whole bunch of mediocre to bad. A less than 60% overall win percentage, bolstered largely by years one and two and trending worse, isn't much to hang our hats on.

That got us one ACC Championship game apperance. Have only sniffed it once since then. We can dwell on the past, but the future doesn't show this as sustainable with the recruiting results.

Looking at the last three years, we are 51% overall win pct and 54% in ACC play. Pretty mediocre by any standards and trending worse. The first two years look very much like outliers at this point.

Honestly, you think about it though and who in the coastal really scares you?

every other team in the Coastal is asking the same thing. And VT isn't on many lists.

Depending on when we play Miami, King might not be ready

Obviously, we're not exactly world beaters, but there's a path to 10 wins, though I think 8 is more realistic

Uva also has a path to 10 wins at the beginning of every season but no one seriously ever believes they will get there. Right now, I'm sad to say, VT isn't much different. I'm not even sure 8 wins is realistic for this team, TBH.

I think if the line is at least solid we will be pretty alright again on offense.

I'm not certain about this. Our line was the best it's been in decades last year and we weren't great on offense. Certainly not consistently. We had great moments. But we weren't great. We were at our best when defenses thought Hooker could beat them through the air and the best RB we've had since David Wilson took advantage. Then defenses figured out that Hooker couldn't really do much damage through the air and then our offense looked pedestrian again. And with Hooker and Herbert (our two biggest run threats) gone and the offensive line rebuilding I think it is unlikely our offense will have the potential it had last year.

Big question for me is if we go from sieve to at least passable on defense. Defense needs to be in the 30s for us to have a shot.

Yeah, everyone's eyes will be on the defense this year for sure. I'm not sure if they'll climb as high as the 30s (I just don't think we have the horses for that) but even so I'm not sure that would even be enough. Even when Bud's defenses were in the teens, or better, it wasn't always enough to get more than 9 or 10 wins.

The question on King was referencing whether he would have returned from his torn ACL by the time we play Miami, so earlier on the schedule the more likely he isn't ready.

ah, I missed that. I didn't know he tore an ACL. Miami still has more talent than we do even without King so I'm still not convinced that game is anything more than simply a toss-up

They've always had more talent but they haven't exactly dominated us since joining the ACC.

since joining the ACC? no they haven't. But they've won 3 of the last 4 and VT and Miami are trending in different directions, if you haven't noticed.

If there is a path to 10 wins (you agreed with) then the ceiling is 10 wins. Interchanging words like ceiling and realistic is missing the point. If everything aligns, this team could get to 10 wins. But, teams that have so many unknowns are not likely to have everything align. That is what makes the gap so much larger between the floor and ceiling. So VT is going into 2021 with a 3 and 10 game floor and ceiling, respectively. Obviously not something to gamble on, but as a fan, I want to believe in the chance of getting to that ceiling.

We're getting into semantics here. The point I was trying to make is that despite VT being undefeated in July I think the most likely outcome by December is 6 wins. Best case, everything goes as well as we could reasonably hope and the team wins 8 games. 9 with a miracle. My belief is that this team won't win more than 8 games. Realistically, I think this team is pretty much a .500 team like it has been for 2 of the last 3 years. And given the departures from the 2020 team and the talent (if you can call it that) coming in, 6 wins might even be a bit optimistic.

To your point, though, this team is going into 2021 with a 0 and 12 win floor and ceiling, respectively.

you think about it though and who in the coastal really scares you?

Provided we don't play them at their cursed stadium, that is.

I'm just going to follow up on this and say what I meant by this is (since everyone is roasting it), there is no one in the coastal that I think we have zero shot of beating. Certainly not worded right.

Go through each game on our schedule, and tell me how confident you are that we will win that game - as in assign a percent to each game. Then add up those percentages. For example:

With our roster, 10 wins should have fuente as national coach of the year. I hope so,but dont think so.

Honestly, you think about it though and who in the coastal really scares you?

We're no longer a good enough team to say things like this anymore.

And I don't really care that we have the 2nd best ACC record since Fuente took over when we have losses to Old Dominion, Duke, BC twice, Syracuse, UVa, Kentucky, Wake Forest, and Liberty on the resume. We are consistently losing to some of the worst teams out there. We can't turn our nose up on anyone anymore.

UNC is going to be really good and is out recruiting us at a scary rate. GT is rebuilding in a talent rich market and will be a threat in the next couple of years. Miami is on the verge of actually figuring things out. We can't figure out how to beat Pitt at Pitt so that's a 50/50 split at best. Everyone in the coastal is getting better and I'm not convinced we're keeping up.

I have confidence that despite the location and athletes that Miami attracts that their coaches will still manage to screw things up enough for them not to be BAK.

While that may be well and good we can't rely on our rivals to keep screwing up for us to have success. They can say the same thing about us.

People need to take BC out of their bad programs mental outlook. For the last twenty years they have been a fair to good team most years.

Yeah, if we become one of the 3 best defenses in the conference and somehow can maintain our running game to control the game. It would also help if Payoute became our best WR.

What happens when we lose to richmond? TKP blows up? Too soon?

Pretty sure R.E.M. just plays on repeat then...

I think that depends on who we play first. The first blow-up is going to be big. The second one will be huge.

One other piece of the Miami game will be the talent Miami is bringing in via the Portal. From what I have seen the last two weeks, they may have added three or four starters via the Portal.

Non con, already scheduled, the Morgantown visit will not be fun, nor will the ND game, better take care of business against Richmond and Mid Tenn

Get the Pitt over with after the non-con

GT, BC, and Syracuse in the middle, score some points, take names, leave no soul behind

#Hokies are a combined 1-6 on the road in the month of November in the last four seasons.

They have three road trips (at BC at Miami and at #UVa) this coming November.

That back end of the schedule - sheesh