Got this updated with details from Virginia Tech coach Brent Pry about how Cole Beck @ColetonBeck return to the football field happen & what they are expecting from him https://t.co/AlQVkuEIyn— michaelniziolek (@michaelniziolek) July 21, 2022

First "Big" piece of news out of media days specific to Tech is Cole Beck is back with the football team and now on scholarship. (Someone please check on DC over this he won't take it well).

Get those guys some longer ties

That usually clears up the short tie syndrome.

I need a bowtie

I've heard of a curve but never a bow

I have to throw it over my shoulder, like a Continental soldier...

Pry's is SO close to being perfect.

I need that suit. I would 100% wear that to the tailgate and the game.

Pry said he got his maroon-and-orange, retro Hokie Bird-lined suit tailored at a place in State College called Harpers.Did it break the tailor's heart to do a VT suit and not a Penn State one?"He's good," Pry said. "He's loyal to Brent Pry too." #Hokies pic.twitter.com/3FGUQMhK8c— Andy Bitter (@AndyBitterVT) July 21, 2022

I get ALL of my menswear from Harpers. The owner, Brian Cohen, is definitely the guy that Pry is talking about and Brian is 1000% the very best I've ever worked with.

Dead serious if you ever really truly need menswear and you're having a hard time about it, straight up drive to State College and I'll take you over to Harper's myself. It's a great shop and Brian is the best.

And the man himself:

I will absolutely buy it for you. It can be a bonus anniversary present. You could totally pull it off...
Maybe FlippinHokie would let you borrow her heels to go with it,
But would you change from tailgating before we went to the stadium? I would hate for you to mess up your suit while you are sharing your glorious meat with Lot 18.

sharing your glorious meat with Lot 18

But everyone loves HokieEnginerd's meat....

Yup. Hubs is the Meat Man.

Do we know why there a few lightly drank 40s back behind Dax? 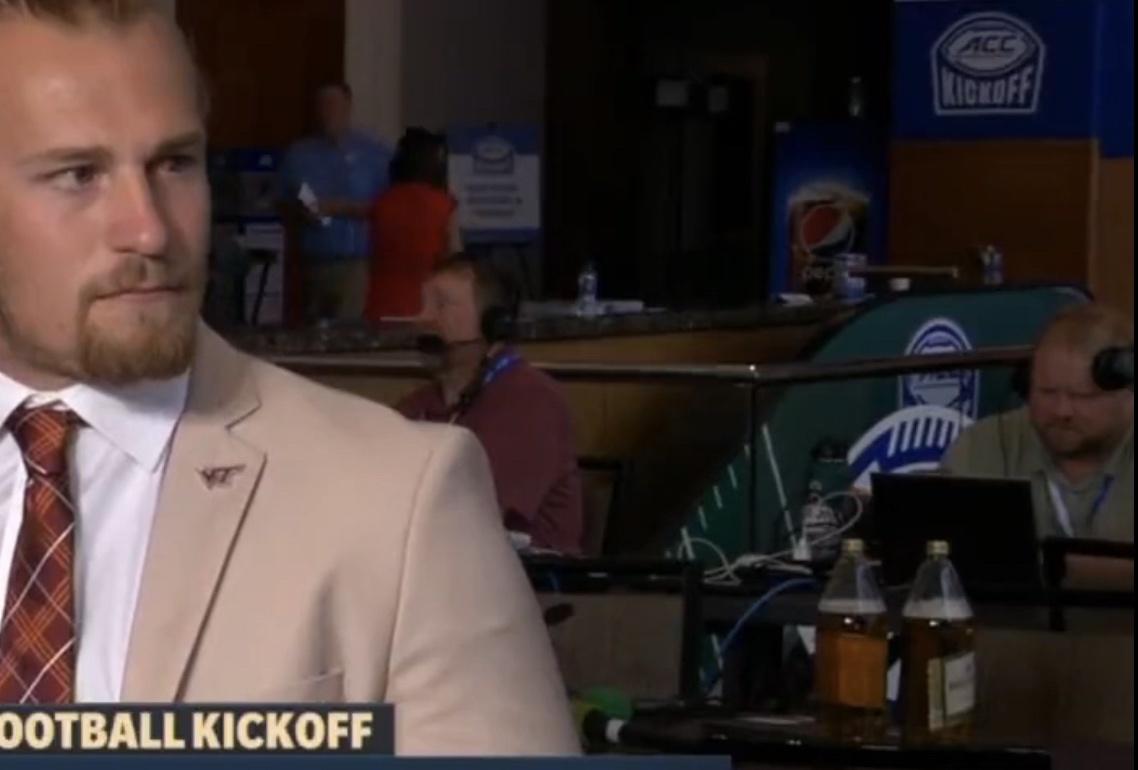 Prepping pouring one out for our homie, the soon to be dead ACC

Been nursing them since 9 o'clock this morning.

This is the attention to detail that I come to TKP for.

Working on improving his 40 time?

Cole Beck is back with the football team playing WR and on Scholly per Pry. Maybe we will see him in a game?

Tony Bennett is a likable class guy too. It sucks!

Yep, it sucks I have too much respect for him to fully hate him. I did really enjoy seeing him get irritated at the UVA game this year while Coach Young patted him on the back. 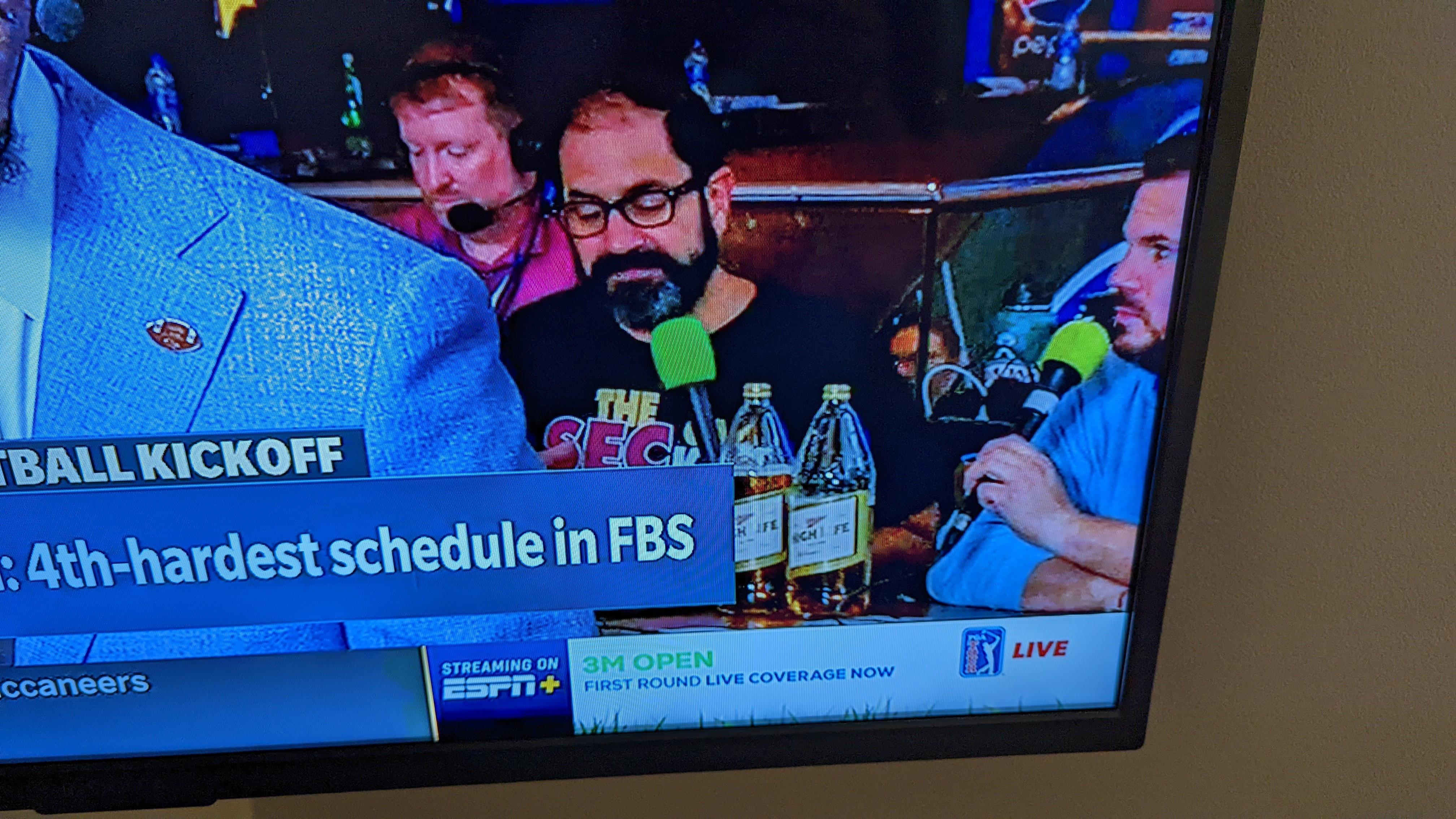 That's Joe Ovies from Raleigh sports radio. I can't help but roll my eyes at everything he does.

High Life. 40s for guys that want to act cool by having a 40, but can man up enough for Steel Reserve or Old English.

I really like the other Joe, Joe Giligo. I've met him a few times and is a solid guy. Knows next to nothing about VT though

Ovies and Brownlow are so cringey I just had to stop watching/listening altogether.

Pry totally gets it. Nice way to make a splash at media days with the press right in front of you.

Silas Dzansi: "I don't want to be rude, but Joe Rudolph is definitely an upgrade" in the offensive line room— michaelniziolek (@michaelniziolek) July 21, 2022

Very little surprise there. I think Rudolph is probably a top 20 OLine coach in the country.

You don't have to hedge here. You're among friends and we're all wearing O&M glasses.

But objectively speaking, he's going to be good for VT football.

First off, damn! That's some high key direct shade. Secondly, I feel like Joe Rudolph is going to be an upgrade from every P5 OLine coach except for about maybe 5-10 guys? I'm just glad he coaches for our team.

edit to remove embedded tweet: miket beat me by 6 seconds while I was looking for a gif

Cole Beck in a straight line might be able to take the top off a defense if we can uncork a few long balls.

I think I know a guy 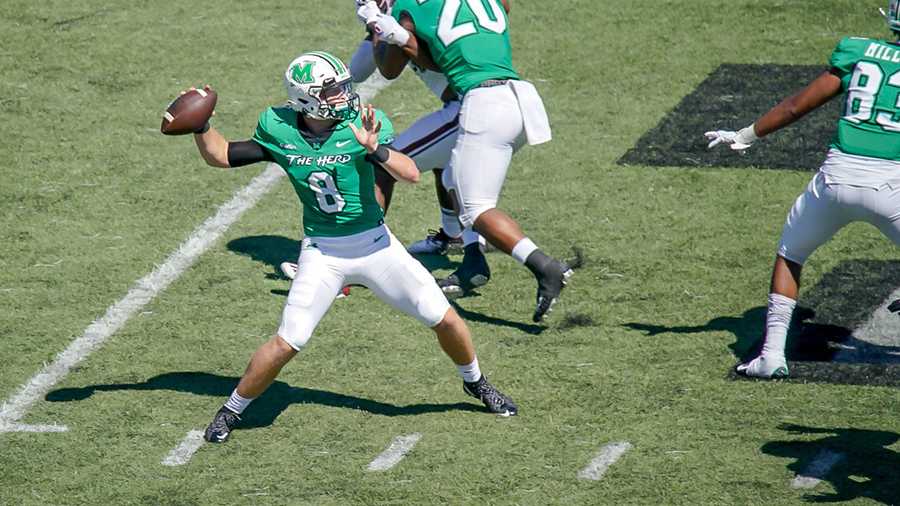 Reactions (because I have been too quiet lately)

1) Cole Beck's return. All world speed, but unless he has become a much better football player while not playing football (see what I did there), limit expectations. Perhaps he can be an asset as a returner or a coverage player, but while he has amazing straightline speed, I was underwhelmed with his production playing well below P5 level opposition during his HS career in SWVA.

2) Dzansi noted that Joe Rudolph has been a major improvement. Hey, we all can't wait to kick the Fuente era to the curb, and I had some technique and scheme beefs with Vance Vice. But, he did a really good job of identifying talent and getting (some) of them ready to play really quickly. You can't scoff at how he took projects like Nijman, Darrisaw, and Tenuta and turned them into NFL caliber players. Rudolph will do things differently, but I think the limits in athleticism and experience up front will lead to some growing pains this year. This won't be a Wisconsin running game day 1.

3) Dax talked about leaving the program with a winning culture. Based on my looks at the spring game, he may be one of the two long term starters who could have a very quick hook this season (the other is Conner.) It is show me time for Dax.

4) I am surprised Garbutt wasn't one of the team representatives at Media Days. I think he could have a big year given Pry's success with undersized twitchy DEs. I think he is going to have a big season, and I hope his absence isn't indicative of an issue. I have no reason or evidence that there is one, but a decade of bad things happening has made me wary.

5) The recruit flip live during the press conference was brilliantly orchastrated. Pry needs every bell and whistle to change the narriative. Can it overcome what NLI and realignment are doing? Yet to be determined.

"Cole Beck's return. All world speed, but unless he has become a much better football player while not playing football (see what I did there), limit expectations."

Maybe having spent less time with the prior regime will make him better than the people Fuente's staff was "coaching"? Hey, I can always dream can't I?

Cole Beck may not be a natural football player, but he'll be the fastest guy on the team (and probably the best athlete overall) the second he puts on a jersey. My guess is he's a 4.2-ish guy right now, and if you've seen any track clips of Beck the last year or so, you'll see he's pretty jacked--both upper and lower body.

I'm not surprised Pry wanted him back on the team on scholarship. He's won ACC titles in both 100m and 200m, was a 2-time ACC Championships meet MVP, and qualified for the NCAA Championships. Worst-case scenario, he's a locker-room example of how to train and win at an elite level.

Best case scenario is he is sort of a Corey Fuller-type player for VT: not a great football player, but so damn fast you have to get the ball in his hands. And FWIW as a comparison, Corey Fuller ran a more-than-respectable 10.5 second 100 meter dash in college. Cole Beck has run 10.11.

I understand your point about fastest guy on the team, but can he get off the line of scrimmage? A good db will jam his ass at the line and chip him so he cant get to full speed. Running around a track and being fast on a football field is as different as night and day. Quick and shifty are much harder to guard. Can he get in and out of cuts in routes? Straight line speed is nice for a fly pattern, and maybe they can chuck this up once or twice a game. But the d coordinator is going to know when it's coming, they will max protect, and it will be obvious.

Fly, go, and maybe come back as routes. Return guy if he can catch punts?

Punt returners gotta make the first guy miss, kick returns is where it's at for the straight line speed

Beck will have his roles and not be an every down guy. He is there to run past people or run them down on kick coverages.

Vice was one of our best coaches, if not the best coach, that we had on the last staff. He did great things but that doesn't mean Rudolph isn't far more knowledgeable and technical.

Saying these guys should have a quick hook while moving to a new scheme and for Conner, a new position, would be a bad thing. They are the leaders and the ones that the staff have talked highly of. Pulling them at the first sign of struggle I think would send a bad message to the rest of the team.

We all know this is a season of transition and growing pains. Let the kids go play fast and have fun again. It has been a while since the VT teams have done that.

Garbutt apparently was with Pry, Dax, Dzansi, and Smith at Media Days. Good to see he was there with them, he will certainly be an important leader this season.

Kaleb Smith posted something about him and Dzansi meeting Pry and Dax in Charlotte. So I wonder, with Garbutt also being there, if there wasn't something going on with those three in North Carolina.

Dax is from Shelby which is less than an hour from Charlotte. Blacksburg VA would be way it off the way. Blacksburg SC, not so much.

Dax said in an interview that he and his girlfriend were going to the beach afterwards.

His attention to relations/PR is next level.

So they have a thing called "Media Days", but as far as I can tell, you can't go on the internet and play the videos from portions of the press conferences.

I'd like to see Pry's remarks, but I can't find them except in tweets.

Most of them are here I think:

Fuente hated making waves at the event, but Pry wanted to create a tsunami.