A comparison of B12/ACC/Pac12 TV viewership 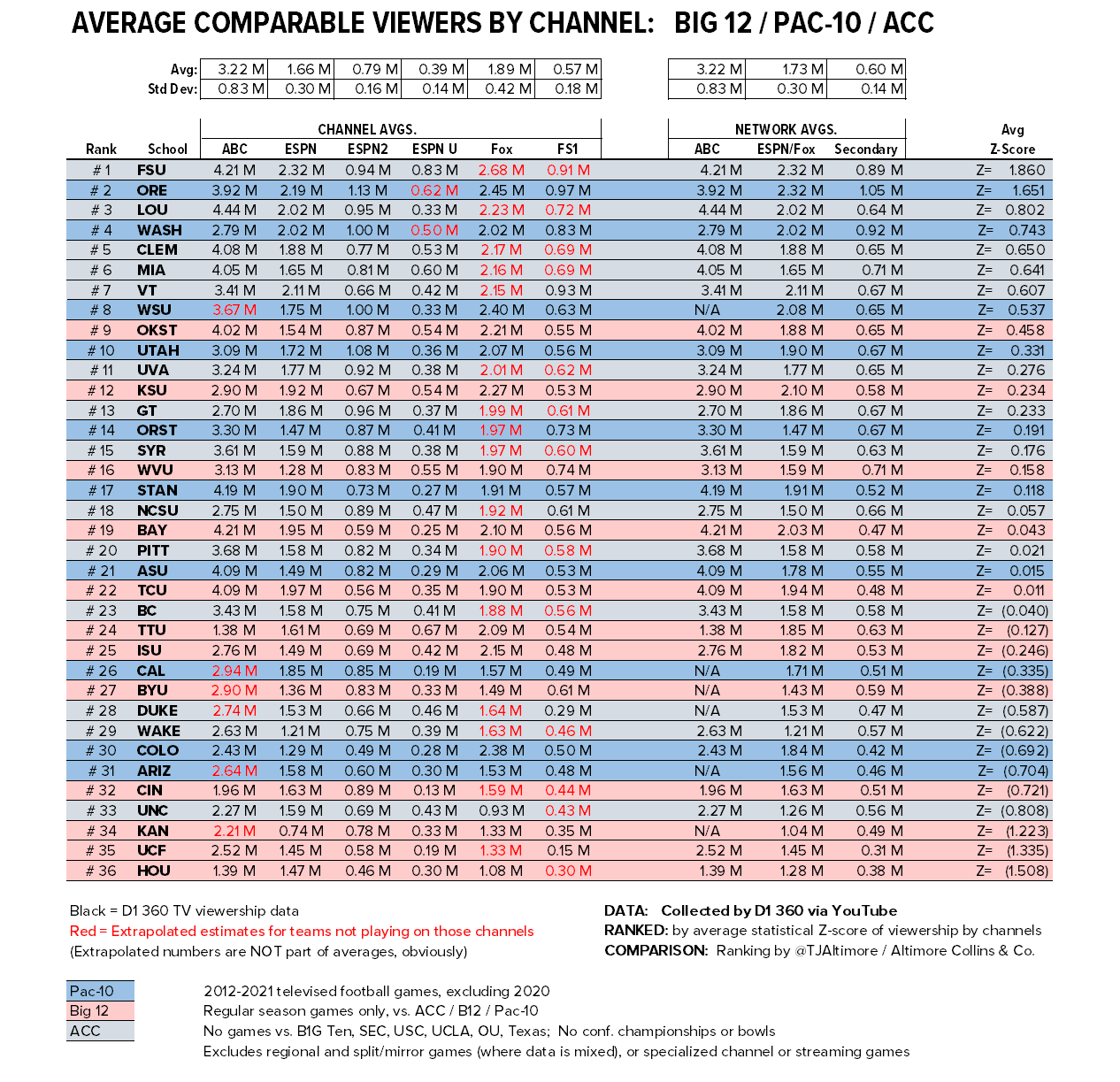 Mandel makes a bunch of terrible decisions in crunching his stats. YouTuber D1 360 has a much more effective data set comparing Big 12, Pac-10, and ACC TV performance by channel. They can NOT be simply added together. Here is a summary from D1 360's data: pic.twitter.com/b0mLr4DQCV— Tony Altimore (@TJAltimore) July 25, 2022

Am I reading it correctly that VT is the 3rd highest watched on ESPN? (after FSU and Oregon)

yup. Those Thursday games probably help with those numbers.

This really shows that no one f'ing cares about Wake vs Pitt. Even their fanbases didn't really tune in much less people out of conference. No one's going to watch ACC football just because it's the ACC.

Cincy had a dark horse bid for the Playoffs IIRC, so people outside the conference were interested.

I think these numbers are what made the ACC realize (of course, years too late IMO) that 3-5-5 is the way forward, not divisions.

Here's some numbers from "bigger brand" ACCCG's in recent years:

It's notable to me that all three of those got fewer viewers than Okie St-Baylor. 2015 and 2016 were close championship games as well. Only 2017 was a blowout.

I suspect this is partially due to larger fanbases from conference members, but also (checked some numbers, VT has larger enrollment than either Baylor and anotherOSU) Big XII football has been defense-optional for a long while. That's what people expect out of that game and non-football people will tune in to see lots of points getting put up.

Big XII football has actually had relatively good defense for the last several years. They haven't broken that stereotype in many circles from the early and mid 2010's, but it's largely been a rather innovative defensive league recently. That title game in particular featured two average/slightly above average offenses and two of last season's better defenses.

Were any of those games on at roughly the same time as either the SEC or B1G championship?

I don't think it usually overlaps with the SEC championship as that is almost always at 4pm I believe. ACCCG is usually at night. However, that does mean it could be overlapping with the B1G championship, which I believe is usually in the Saturday night slot competing against the ACCCG.

Standard championship game arrangements the last few years:
-Pac-12 is on Friday night, alternating between Fox and ABC.
-CBS has SEC at 4
-Fox has Big Ten in primetime.

I don't think the Big 12 and ACC have set times and it's up to where ESPN thinks they will perform better. Well, there's a couple of years that Fox had the Big 12 game, so it was at noon since Big Ten was at night. But usually, it looks like the Big 12 gets the noon slot and ACC gets the night game.

It looks like the ACC has had the primetime slot since 2009 (Wikipedia isn't completely clear, so I'm basing it off of announcers for some of those years).

Usually the only competition against the SEC title game is G5 or lower games.

But those three games specifically mentioned -- Each would have been up against the Big Ten championship game on FOX.

2016 was a night game, I think Wake/Pitt this past year was an afternoon game, but I could be mistaken.

I was looking around for alternate sources, and found an ACC press release for the 2018 game:

The 2018 Dr Pepper Atlantic Coast Conference Football Championship Game will kick off at 8 p.m. and will be televised by ABC. This marks the 10th consecutive year the game has been televised in prime time.

The only year in the past decade the ACCCG wasn't primetime was in 2020. Probably because the SEC staked claim to the primetime slot first, since it was so late in the month.

Looking at the list, I think there were playoff implications for each of the conference championship games except ours, so that might have something to do with it.

I'm surprised to see Louisville ranked so high. I wouldn't guess they'd be comfortably ahead of us, but can't feel too bad about us ranking 7th on this list.

Someone mentioned yesterday that they play FSU and Clemson every year which likely helps their viewership. Along with the Lamar effect for a couple years and some big games with those two schools.

Even with my strongest reading glasses on, I still can't read that. Can anyone summarize?

I.E. our ratings numbers aren't hurting us at the negotiation table when we talk to the B1G or SEC.

It's interesting that UNC is so low on the list.

I feel like UNC football is just the biggest self-fulfilling prophecy in sports. Everyone talks about how they are recruiting well, just a matter of time, building something great. Then when they actually play games they suck and no one watches.

They're the proverbial "just a great coaching hire away" story, like Miami. Thankfully they suck at hiring HCs. Mack Brown is their best coach since, well, Mack Brown.

I've always been curious what Frank could have done if he had actually went there.

I don't think better than he did at VT.

Me neither. I think his style and Tech was a match made in heaven/lightening in a bottle. Don't know if it would have really blossomed elsewhere.

But less of a legacy.

And who can put a price on that?

Yep so did DJ Durkin. Now both making big money in the SEC West.

Beamer's legacy at VT is optimal, and he did it at one school. He got a statue, a way, and our undying gratitude.

The guy is a legend.

The guys who move around a lot are just sellswords. They take their money and they move on, but they're not quite as memorable because they didn't make quite as big a dent at one place.

Frank Beamer BECAME VT football. They were one and the same.

And a spot in the college football coaching Hall of Fame.

Well said, but do me a favor and quit slicing those onions.

The guys who move around a lot are just sellswords. They take their money and they move on, but they're not quite as memorable because they didn't make quite as big a dent at one place.

If either of them win a natty at their current schools, no one will remember that they left OU/ND (except for fans of OU and ND).

I mean lots of people forget about Saban's NC at LSU

They legitimately don't care about football. They go through the motions, they'll hire a past his prime 'name' coach and they'll put a great coat of paint on the facade, but behind the scenes they just don't care. At the end of the day, its all just a distraction from the football team, so there is absolutely zero accountability for them to do well and succeed. As long as they are talked about in the preseason, that's enough for them.

The second they lose any game its onto basketball. Having lived here for nearly 40 years now, its always the same old story with them. They've had some good players and they will recruit decently, but they do not nor will ever have the culture that drives them to sustained success in football.

If we're going to use TV numbers as an indication of brand value/potential realignment value, we need to do a deep data dive (eg; a multivariable linear regression accounting of colinearity) on TV numbers. There's sooooo many contributing and complicating factors, including (but not limitted to):

I like Mandel and Staples (both of whom have discussed TV ratings a lot with regards to realignment), but they're journalists, not data analysts. As a result, their insights are at best surface level.

Is there any way to do a comparable viewership based on time slots?

Doing that, as bar said, starts getting into a LOT of data. Especially since you're going to want to compare against multiple years, and against other conferences (do conference rivals beat out things on other channels, what is the profile/draw level of the thing on another channel, do the games with playoff implications spike viewership, and if so, how much, are their combinations of those things, etc.)

If you have the data, it wouldn't be that hard

One thing I've never been able to figure out is the prestige factor of channel AND time slot combined.

Obviously, there's a generalized hierarchy that the best games go to primetime, then the 3:30 slot, and then the noon slot. And also, ABC gets the best games, then ESPN, then ESPN2, then ESPNU and the conference channels.

But I can't figure out if a primetime game on ESPNU is more "prestigious" than a noon game on ABC.

There's also a lot of other factors in play. Like when ESPN is in a pissing match with a cable company and puts Notre Dame at VT on primetime on ACCN prior to the start of the season. And now recently where Fox has started using the noon time slot for their best games.

Not to mention other wild card factors, like expected weather/temps later in the season. One of the years that we were scheduled to play uva on Black Friday, and we were trying to predict which timeslot we'd get, there was a Big Ten game (I believe Iowa) that we knew had to get an earlier time slot because it would be too cold to play after dark.

See my original comment for a take from a media member I like:
I've heard it explained these ways (I'm paraphrasing comments from Split Zone Dou): Recruits and their families want games to be easy to find - which typically means "turn to channel X"

Now, this could all change in the next 5-10 years, but we've been waiting for streaming to replace the cable bundle and it hasn't happened yet. While streaming has hurt the cable bundle, it hasn't replaced it yet, and doesn't look like it will anytime soon.

Pretty clear Oregon, Washington and Okie should be our next additions plus Stanford and ASU (money and size), we'll see if that can convince Notre Dame to hop in as well.

Wazzou has a bit of a cult following. They also play more games at the late night slot when there's less 'competition' from other broadcasts.

The College GameDay flag is the ultimate recruiting tool for a school in the middle of nowhere, whose stadium is one of the smallest in the country, but whose fans absolutely adore them.

Great piece from a Baylor blog on TV ratings

The network you appear on determines a lot. Mandel gave lip service to how the high number of FS1 games artificially disadvantages the Big 12 due to games involving Texas and OU taking up most of the best network spots. However, his analysis otherwise disregards this massively significant factor. Look at the following chart for median values from my data for each time slot on a typical Saturday.

The expected value for a game on FS1 in the afternoon is almost 10 times less than a prime time ABC spot. Frankly FS1, ESPNU, ESPN News and FS2 games will tank your averages if you are a Power 5 conference. ESPN2 is slightly better but still not very strong as it's top window in prime time has a median value of under 1M.