With a calculated approach at the plate, Virginia Tech showcased their offensive prowess en route to a Blacksburg Regional crown. 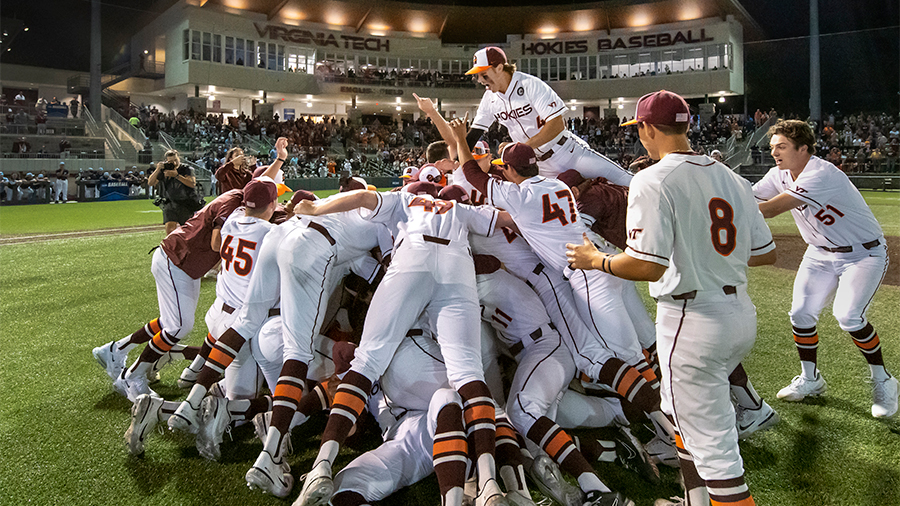 For the first time ever, a Super Regional will be played in Blacksburg.

The Virginia Tech Hokies have hammered their way to the second stage of the NCAA Tournament, displaying their offensive might with 46 runs over three games in the Blacksburg Regional. The slugfest began with a 15-9 victory over Wright State on Friday, and was followed by a 24-4 demolition of Columbia on Saturday night. The upstart Lions — who had no trouble taking down Gonzaga — proved yet again how unpredictable baseball can be.

But it was the Hokies who demonstrated that in a sport predicated on randomness, talent still reigns supreme. Tech defeated Columbia 7-2 on Sunday evening in the regional final before 2,663 fans at English Field. Shortstop Tanner Schobel and third baseman Carson DeMartini hit home runs. Starter Ryan tossed a career-high 4 ⅔ innings of one-run ball. The bullpen shut the door. As a team, the Hokies were clicking on all cylinders.

Obviously, Virginia Tech won this regional because they have very good hitters. But good hitters are good in part because they can anticipate what pitches are about to be thrown — any batter who steps up to the plate guessing is going to have a very short shelf-life. One thing I love about baseball is the hidden part of the game — the chess match between batter and pitcher where each is trying to predict the other's next move.

In today's piece, I am going to focus on how Tech's hitters adjusted in their at-bats and ultimately broke through against a Columbia pitching staff that rebounded very well from a dismal performance on day two.

The Game Within the Game

Baseball is an anticipatory game. As a hitter, you spend hours pouring over film and crunching the numbers to get a good idea of what a pitcher likes to throw in certain situations. There are numerous factors that go into pitch selection, not the least of which is the count, the location of the baserunners, the number of outs, and, of course, the strengths and weaknesses of the batter. You look for tendencies. You look for giveaways: where is the pitcher's release point? Is he tipping his pitches? You can always adjust your swing after the pitch has been thrown, but in a sport where reaction times for hitters are less than half a second, every tiny clue is important.

In Sunday's win over Columbia, it didn't take long for the Virginia Tech offense to pick up on the tendencies of their opposition, putting their power and bat speed to good use. Let's start in the second inning, with the Hokies leading 2-0.

With one out in the inning, DeMartini took an 0-1 curveball out of the hand of Columbia starter Joe Sheets. His curve came in at 80-82 MPH and featured some noticeable arm-side break. While DeMartini ended up striking out (more on that in a moment), first baseman Nick Biddison fared much better. The senior spit on the first-pitch curve thrown for a strike. With the count 0-1, he anticipates another one, waiting on the breaking ball to get deep in the zone before smacking it to right center for an RBI triple.

After the Hokies roughed up Sheets for three runs over 2 ⅓ innings, the Lions brought in reliever Saajan May, who possessed a filthy cutter that had the Hokie hitters baffled. We can see a great look at it on this pitch to Hokies' DH Conor Hartigan, who struck out in the third inning.