The Hokies have added their first 2018 commit. 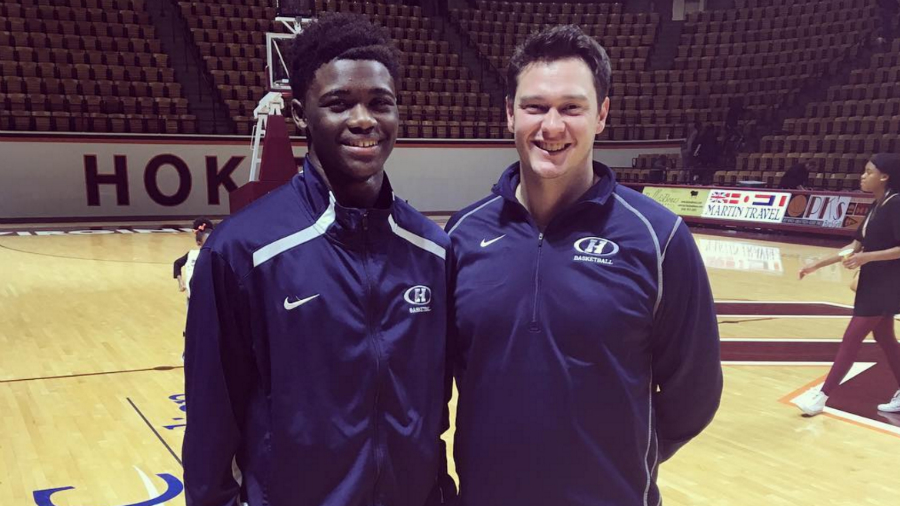 "I can honestly say I have found a great organization that will benefit me for my four years there and the years after that," McAllister told The Heritage Herald. "After meeting with all the staff members and coach Buzz (Williams) I feel like Virginia Tech is the place I want to be. Everyone just made me feel welcome and it felt like I was with family."

The 6'3", 160-pound small forward/guard also held an offer from VCU, and is rated a 3-star recruit by the ranking service Future150 as well as 247Sports. According to MaxPreps, McAllister averaged 13.4 points, 3.4 assists, and 5.1 rebounds over 29 games last season.

Williams hopped on the tweet machine and used just a few emoji to express his feelings on McAllister's decision.

And I somehow assigned LT the Bucky Hodges joke in the other thread.
Edit:
OK...so it's Friday after 5...we all know what's happening here...

Welcome to the family, Jarren!

Somewhat related question: This guy is class of 2018, so he will be suiting up not this fall, not next fall either, but the fall after that. When's the last time that someone committed to VT in hoops that early? Any guesses?

Another question, how does the basketball recruiting cycle work compared to football? Like when is signing day (same?) and if a kid graduates spring 2018 from high school, when would he normally begin team activities and when would he play? Do basketball players usually play as true freshman?

Sorry for all the questions but your question brought all these to my mind. I obviously don't know much about college basketball recruiting.

Edit: time stamps will get after ya.

Statistics and highlight tape look like a winner, especially if he's doing this well this far out from his senior year.

I think this one is pronounced, "Kevin."

Looks pretty smooth and under control. Has an extra gear when he needs it. Good leaping ability. If he is projected as a wing possible small forward, they must feel his wingspan indicates he will be 6'5 eventually or more.

He will start his Jr year next fall, I know I grew from then until I graduated, not too much of a stretch to think he'd grow 2 more inches

Heck, at the rate his stats are changing, he might already be 6'5"!

Offers to kids after their sophomore year of HS? Even I could have benefitted from that (soph was my best), but I guess if he stinks it up or breaks a leg in the next two years, the college can always retract the offer. Kinda nuts projecting recruits this far in advance - what rules are there on how early on teams can recruit players? Seems like there has to be something on the books, but then you hear about these disturbing stories of a college offering a 7th grader.

LeBron claims that his kids started getting offers when they were around 10, so I guess there isn't a rule on when you can start offering.

If you ever read the book Play Their Hearts Out you'd be amazed at how early kids start getting evaluated and offers from colleges. There's a story out there somewhere about Matt Carlino (former Buzz player) getting an offer from Lute Olsen when he was in 3rd grade

I like this because it shows outside chance buzz stays at least to coach this kid a couple years...
Sweetness!!

On another note, Markell Johnson to NC State.

Just out of curiosity, did we ever find a replacement for Chew?

So far this is the only official addition.

Considering the amount of coaching he did last year, I wouldn't be surprised to see Reynolds to get bumped up to the assistant position and they bring in someone else for the ops job.

McAllister made it official today at the start of the early signing period. Hopefully Nolley signs now as well to lock up the top two commits for 2018.

When there's a "zombie" Commitment thread in the tracker: