The Hokies secure a post-season tournament win for the first time in 2 years and 4 days. 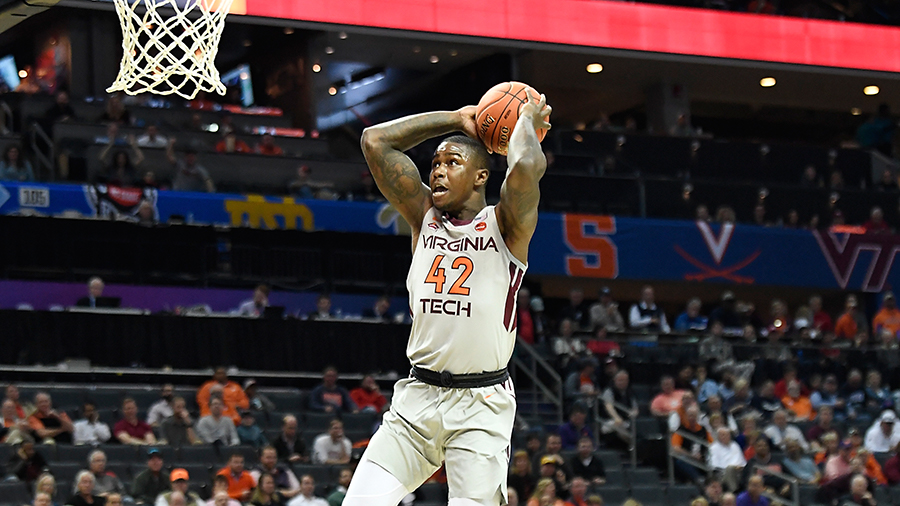 Virginia Tech faced a unique situation on Wednesday afternoon. The 5th seeded Hokies opened the 2019 ACC tournament by taking on the same opponent they had beaten five days prior to close the regular season. The Hokies didn't stumble, knocking off the Miami Hurricanes, 71-56 in Charlotte to move to 24-7 (13-6) on the year. The win marks the first time ever that Tech has gone 3-0 against an ACC opponent in a season.

For 30 out of 40 minutes, it was a comfortable contest. Only a couple blocks away from the NASCAR Hall of Fame in Charlotte, the Hokies took the green flag in style. An 11-0 lead at the 15:38 mark and a 25-8 advantage with 9:01 remaining in the first frame was spurred on by Ty Outlaw. The senior guard scored 9 of the first 11 and 11 of the first 25 Virginia Tech points.

"It was really just my teammates getting to the paint and being aware that I'm ready to shoot whenever they kick it out," said Outlaw. "So we were getting into the paint with the plays we were calling, and I was just ready for it."

Outlaw was honored pregame, as he received the 13th annual Bob Bradley Spirit and Courage award from the Atlantic Coast Sports Media Association and the Atlantic Coast Conference. The award is given in memory of Clemson's Bob Bradley to an ACC player, coach, or administrator who has dealt with significant hardship and is still able to contribute to their team. Outlaw has missed two seasons while in Blacksburg, once with a heart condition and once with a torn ACL.

"I've been through a lot," noted Outlaw. "I'm glad they gave me an aware for it, but I wasn't doing it for an award, obviously, but it meant a lot. I always have my team, my family, my friends supporting me, and just to be recognized for it, all the stuff I've been through, was a compliment."

The Hokies didn't take their foot off the gas in the first half and sped into the locker room with a 38-21 edge. After intermission however, it was the Hurricanes off to the races.

"I thought to start the second half we were much more poised and focused on executing our game plan and did a really good job, cut the lead to seven, and actually had a wide-open three that would have cut their lead to four, and had that happened, I think that could have made the difference," said Miami head coach Jim Larranaga. "But right after that, it went from 7 up to 14 again and kind of took the air out of our balloon."

Buzzketball weathered the storm courtesy of Kerry Blackshear Jr., who scored 8 straight points to widen the gap. The Hokies' big man continued to show off his versatility, scoring those 8 points via a dunk, step back three pointer, and an old-fashioned three-point play.

"I really didn't even know that I scored that much in a row," said Blackshear Jr. "Just in the flow of the game, we just found good looks. I thought that the intensity on defense led to that run that they made, so I think we picked it up there, then we were able to score in transition at the rim, and finding each other on open shots. I think it started with defense on that run."

Defense has been a calling card of Virginia Tech this season. That's a sentence nobody expected to read or write after last year's campaign. The Hokies are holding their opponents to an even 62 points per game following their win. Last season, Buzzketball finished the year allowing 72.2 points per contest. A 10-point improvement is massive, and one of the reasons that the Hokies are competing for a 4 seed in March Madness.

That defense will be put to the test tomorrow afternoon when Tech takes on No. 4 seed Florida State. Ironically, it's a mirrored schedule for Tech. Florida State and Miami to end the regular season, Miami and Florida State to start the postseason.

"It's strange, right?," said Williams. "We're living last week in reverse this week. It's never happened. I agree with what Ty said. I think we were better today than we were on Friday. Obviously, a neutral site, new place. But it's never happened, so it's hard for me to have the evidence on what to say. But obviously we didn't do very well in the second half at Florida State. So, thankful that we have another chance."

Eight days removed from their loss to the Seminoles in Tallahassee, the players know they have a couple aspects of the game to focus on in tomorrow's quarterfinal matchup.

"They're a very hard-playing team and they won't back down," explained Outlaw. "It's never over when you're playing against them until the last second goes off the clock. But they have talent. They won't quit on you, so that's what we have to take from last game. I think we kind of relaxed, even though we tried not to, relaxed a little bit too much and them get back in it. We've just got to respect them the whole game and not let up."

"It's going to be a 40-minute dogfight," added Blackshear Jr. "They're a very talented, capable team. I think that we are as well. I think it was a good matchup. It was a tale of two halves, and if we keep the intensity that we had similar to the first half for a whole 40 minutes, I think that it puts us in a really good position to win at a neutral site."

Tournament play is a double-edged sword. On one hand, there's Virginia Tech basketball in less than 24 hours. On the other hand, the Hokies will tip off against Florida State having already played 40 minutes while the 'Noles got to rest. The quarterfinal matchup will get underway around 2:30 on Thursday afternoon.

Isaiah Wilkins continues to impress. Outlaw made a quick jaunt to the locker room in the second half, with what appeared to be some sort of minor injury. As he got treated, Wilkins subbed in and stepped up. The freshman scored 7 of his 10 points in the second half. But what won't show up in the box score is the energy and effort that the youngster brings to the floor.

"He's the only player in my career that never attended summer school that played the next year," explained Williams. "And obviously, upon arrival, we weren't worried about summer school because we didn't anticipate that he was going to play this year, and I think the trajectory of the importance to what he gives us is unlike any player that I've seen at his age. I think he's the second youngest player in Division 1. So his maturity and handling those responsibilities, and sometimes because Ty's old and KJ is old and Five is old and Med is old, sometimes I think our language is so much that I do a poor job of maybe educating Wilkins on, 'I'm sorry, I assumed you knew what that was'. And so that requires a very high IQ for him to even pick up and translate what it is that we're saying. But he's meant a great deal to us, and I think maybe most importantly, his energy off the bench has really changed us on both ends."

Robinson close to a return? With tournament play comes open locker room sessions. And that means Justin Robinson was available to answer some questions.

#Hokies guard Justin Robinson on possibly playing in NCAA tournament: "I think there's a great chance. I probably shouldn't say that, but I feel great. ...My family and me, I think, have handled it the right way. Coach Buzz has been the best coach through it of all." #ACCTourney— Norm Wood (@normwood) March 13, 2019

While the star point guard has been ruled out for the entirety of the ACC tournament, his availability for March Madness hadn't been commented on yet. If the Hokies could get their floor general back in time for the big dance, it would be a boost to an already highly efficient offense. Tech is a top-10 offense according to Ken Pomeroy and entered their first postseason game as the 35th-best shooting offense (47.6%) according to College Basketball Reference.

During warmups in the Spectrum Center, Robinson appeared looser than he did before senior night. His movement was more fluid, he was more active, and he didn't seem to have as much of a limp. It's a promising sign.

Buzz on buzz. It was reported on Tuesday afternoon that Texas A&M coach Billy Kennedy would not return to the Aggies and Williams is the "top target". So naturally, there was a question about it after the game and whether Williams talks about it with his players at all.

"No sir, I've never commented on jobs," said Williams. "I don't think that's appropriate by our kids. Where I'm employed, that just -- I can't control what people say. I've got to make sure I'm doing my best with these guys."

Speculation about where Williams will be coaching next season will run rampant. But it appears that for now, his focus is with his squad in Blacksburg. And rightfully so.

Great write-up, Henry. I appreciate how quickly you got this out.

Hey, I've got food to eat and basketball to watch.

Glad you enjoyed it!

I have to say that I have been far more than just impressed by Wilkins this year. I feel that the energy he plays with just seems to fuel everyone else on the team. He seems to play smart when he's on the floor. I love watching his game. He also seems to enjoy it on the floor too, which always helps.
GO HOKIES!

Though his body and skillset is very different than Chris Clarke, he plays with the same level of energy and juices up the team the same way Clarke did. He also has great instincts (especially as an 18 year old!). I'm definitely looking forward to his evolution over the next three seasons.

Didn't read the game thread, but looked like there was a stretch after KBJ got hit in the face with a pass that he seemed out of sorts or beat up for a few minutes; then back to normal.

Buzz has been linked to A&M for a while now so seeing him as the top target doesn't surprise me. It would be a shame to lose him after what he has done with this program but the opportunity might be too good for him to pass up there.

Beamer, someone he respects/admires, should be talking to him about the time he almost left VT for UNC but decided to stay which led to him cementing his legacy and impacting VT football forever.

I agree that Wilkins has been a pleasant surprise and I can't wait to see what he can do next year after a full rotation of S&C. He didn't look the part of a ACC player when the season started, but he is certainly playing the part well.

Outlaw made a quick jaunt to the locker room in the second half, with what appeared to be some sort of minor injury.

The collective hand-wringing and sphincter-clenching that went on in the game thread over this is the reason I posted the thread about the merits of a deep ACC tourney run. It's not just the legs, but also it's the threat of one injury (even a minor one that could cause a player to miss ~2 weeks) derailing what we have left.