It was a rough road trip to Atlanta for Virginia Tech, the Hokies fell to Georgia Tech 57-76. 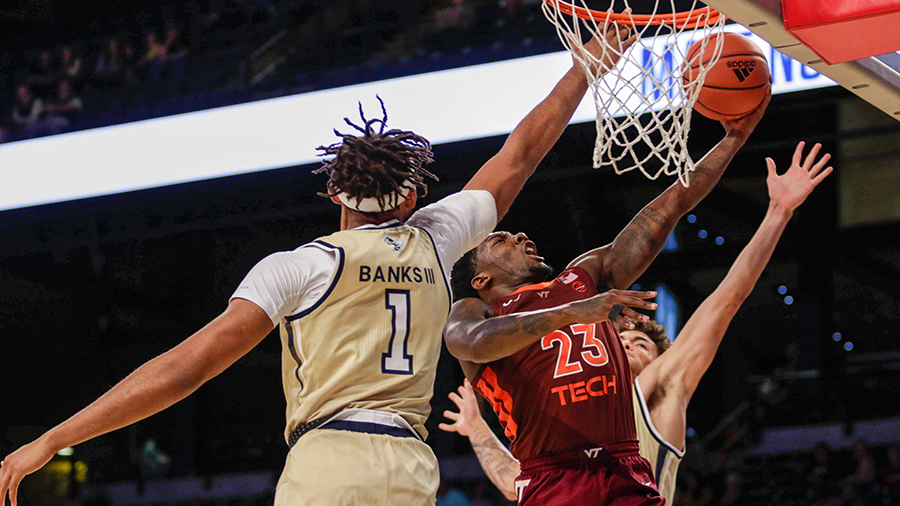 For weeks, Virginia Tech fans have been trying to temper their expectations for the up-and-coming men's basketball team that overachieved early on in the season.

The Hokies had provided so much joy for a fanbase still stinging off a disappointing end to football season. Whether it be the upset of Michigan State at the Maui Invitational, three straight wins (Syracuse, N.C. State and Wake Forest) in ACC play or the sheer fact that a team with six freshmen in its rotation was staying afloat, Mike Young and his squad were quickly gaining fame as Blacksburg's currently most beloved sports team.

But after a disheartening 76-57 blowout loss at the hands of Georgia Tech — a team that came into the game with a below .500 record overall and in league play — it's clear that the Hokies can't hang onto memories and now must find a way to grow up quickly.

"Just the energy that is required game in and game out," Young said about what's required for a turnaround with his young squad. "When we were rolling — and we've rolled for much of this season — we're up on our toes and our shoulders are back and we're engaged. We are enjoying competing with one another. We're back on our heels a little bit right now and the only way to come out of that is to play winning basketball."

Tech looked anything but engaged in the lopsided loss to the Yellow Jackets on Tuesday. Georgia Tech went on a 15-2 run over a nine-minute stretch in the first half that opened up a 38-18 lead. They followed that with another 10-3 run in the second.
Throughout the course of the game, the Yellow Jackets led by as many as 29 points.

Coming into the contest, Georgia Tech ranked fourth in the country in percentage of points by two-point field goals. Against the Hokies, the Yellow Jackets were simply efficient everywhere as they outscored Virginia Tech 34-22 in the paint and hit eight triples.

"They are fourth in the country in made [two-point field goals], I think, a pretty staggering statistic," said Young. "They haven't shot the ball great and we get caught with our hands in our pockets twice on [Georgia Tech guard Jose] Alvarado, with him banging two from distance. When things aren't going well and you're not playing well and are engaged and aren't playing the game the right way, those things tend to happen."

In last year's 52-49 loss to the Hokies, the Yellow Jackets got a big performance out of Alvarado as he scored 17 of the team's first 24 points. He finished with 20 points.

On Tuesday, he once again caught fire as he finished 8-of-14 from the field, including a trio of threes, to finish with a team-high 20 points again. Georgia Tech showed off tremendous balance, however, with three other players (Moses Wright, Michael Devoe and Bubba Parham) each finishing with 10 points or more. They shot 53 percent.

"Hats off to [Georgia Tech coach] Josh [Pastner] and the Yellow Jackets," Young said. "Alvarado is really good. He's another dimension of offense. Obviously, the plan early on was just to drive it. We've been very good in that regard and I thought we did a much better job in the second half, but the damage was done. Devoe gives them another dynamic kid that can keep his bounce alive with his left hand and finish plays. I really liked [Jordan] Usher coming in. He's such an aggressive kid. I really admire him on the offensive glass. Josh has a legitimate frontline with the two big kids and it paid off."

The Hokies had taken tremendous strides defensively over the course of the season despite being undersized against almost every opponent they've faced. During their current four-game losing streak, however, they've struggled to get consistent stops.

"Throughout the course of the season, we're typically outsized in the frontcourt and the backcourt," Young said. "You just have to toughen up, keep the ball in front of you and keep the ball out of the paint. There is critical real estate there in the middle of the lane. [Georgia Tech] made a living in that area in the first 20 minutes. Of the number of things to shore up Thursday, a great deal of time and effort will be focused on that part of it."

It was a homecoming game for a trio of Hokies in Landers Nolley (Atlanta), Nahiem Alleyne (Buford) and P.J. Horne (Tifton). Nolley's recent struggles continued as he went 4-of-14 for 10 points. Horne and Alleyne, meanwhile, went 4-for-9 for 10 points.

"We typically start three from Georgia," Young said. "Naheim didn't have the right look either. I thought they both played better in the second half. I don't think that had anything to do with it. I may be wrong. That would be uncharacteristic of [Nolley]. He's a basketball player. I don't care if basketball players are playing at home, on the asphalt, wherever it may be — basketball players play and play the game the right way."

Virginia Tech's offensive struggles also continued as it shot just 38 percent from the field. The Hokies finished 4-of-23 from three-point range — another sign that this team is simply not playing the same caliber of basketball that it was early on this season.

Tyrece Radford was once again one of the lone bright spots with 12 points on 5-of-9 shooting. Nolley was the only other Hokie to reach double figures in scoring.

"They guarded us the way we would have liked to guard them," Young said about the Yellow Jackets. "They were up under our chin. We had two shot-clock violations and we haven't had two of those throughout. We want to be patient and work parts of the floor, but their coverages were good. I thought we attacked it much better in the second half. I wish we would've attacked it that way in the first half. But that zone was bothersome."

Moving forward, realistic expectations for this squad are a bit of a question mark. It's probably safe to say the NCAA Tournament is out of the question now after so many lethargic losses in league play. Perhaps the NIT? Not with performances like Tuesday's.

"We know what that is all about," Young said about his team facing some adversity. "I feel quite certain that Thursday's practice will be interesting for us. We will get some things out of the way and expect to play much better Saturday against Boston College."

There's still plenty to play for for a team that has already overachieved. Virginia Tech was picked to finish 14th in ACC play this season. It already has five conference wins.

At this point, however, that isn't what is on the mind of Hokies fans or Young and his team. Instead, they just want to get back to the fun, loving team fans fell in love with early on this season.

"They were obviously more aggressive, more connected than my team was throughout the game tonight," Young said. "That is discouraging, but we'll be back. There will be better days ahead for the Hokies."

Usually you will have one freshman in a 'freshman slump'. Well, we have 6 of them in rotation and they ALL are in the slump. Confidence is at an all time low for these fellas you can see it in their shot. Hopefully they can snap out of it for the last half of the season to finish strong!

Our two experienced players are really just good bench players. 2 or 3 of the freshman simply aren't ready for ACC basketball. Nolley went from going to the NBA draft to going to the bench in like 2 weeks. Just a total slump for the whole team.

I do think, however, that they'll start to play better in the next few weeks and hopefully finish up at 9-11 or 8-12 in the league. I think that'd be big for this team.

They also need to keep playing Ojiako. It simply doesn't make sense to throw Horne out there anymore.

Defensive is the only reason Horne is on the floor and he needs to realize that. Not sure why he still thinks he has got the green light for any shot. While Ojiako is extremely raw, he's not going to get any better sitting for 30 minutes a game. What is there to lose at this point?

Ojiako also gets himself into foul trouble fairly quickly when he's being given more burn.

When things were going right this season, this team would move the ball around quickly and cutters were constantly going through the lane. Recently, the offense has turned into a pick up game with way too much dribbling and very few cutters. Shooting has been a real problem but it's not just the 3's, we have missed a lot of shots around the rim and we have started to miss free throws. Hopefully they can turn around soon.

Not sure what happened to Nolley's swagger. At the beginning of the year, even when he missed a few shots, he kept firing with confidence. Now, he seems hesitant, so, even when he does put up a shot, it's likely not going to go him. I hope Mike Young draws up some sets to get him open looks early against Boston College on Saturday.

Also, I knew Bede has been a decent distributor this season, but I feel like most of that has been from the perimeter. For this offense to truly maximize its limited potential, we need someone who can penetrate. Maybe Radford should start taking the ball up. He can penetrate the defense better than anyone else and has the ability to finish if the kick isn't there.

On a positive note, Jalen Cone is probably one of the fastest players with the ball in his hands that I've ever seen. When it is his offense, watch out because every defensive rebound could be a fast break.