In what some might describe as an unconventional or uneven performance, Virginia Tech found enough success in Radford, Cattoor and N’Guessan to earn its first road win of the season. 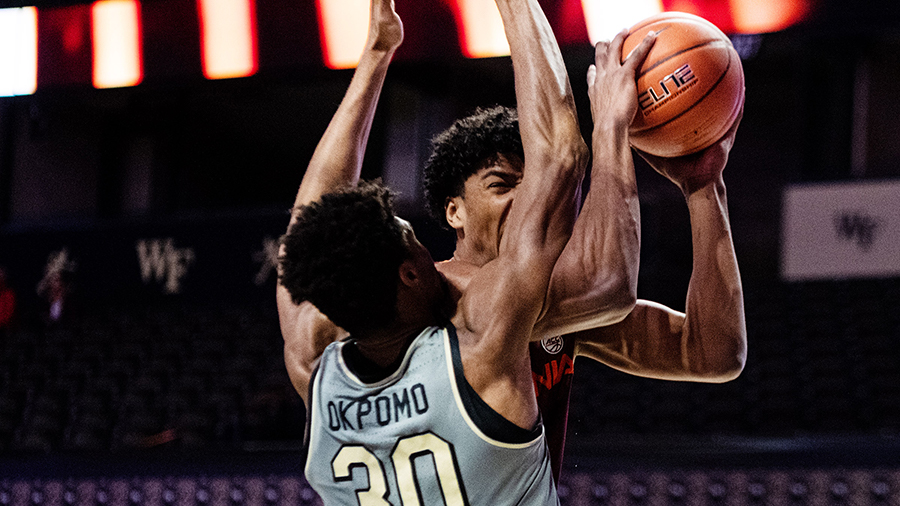 It wasn't the prettiest performance, though Virginia Tech found a way to win its first road game of the season at Wake Forest, 64-60.

The Demon Deacons bested the Hokies on the glass (37-30), in the turnover column (15-13), in paint points (30-26) and with points off turnovers (17-12). Steve Forbes' squad even held Keve Aluma and Jalen Cone, Tech's duo that averaged over 28 points entering Sunday's contest, to five points on 1-10 combined shooting.

Yet, despite its two leading scorers struggling and Wake Forest (3-5, 0-5 ACC) dominating almost every statistical category, Virginia Tech (11-2, 5-1 ACC) responded to every blow from the Demon Deacons and pulled out a victory in Winston-Salem.

"There's nothing easy in any league," Hokies head coach Mike Young said. "It's hard. You've got to play good basketball. We didn't play great basketball tonight. We won, and the last time I checked, that's the only thing that matters. I'm proud of them."

Though some may say Wake Forest isn't the toughest ACC opponent, the Demon Deacons tested the Hokies for 40 minutes.

Tech led 29-23 at halftime after holding Wake to 23% shooting in the first half thanks to nine blocks. The Deacs adjusted, though, and made 15 of their 29 shots (52%) in the second half. Ismael Massoud (12 points) and Daivien Williamson (11 points) led the way for Wake Forest, and it seemed, at times, that it was Wake's game to lose.

That is, until Tyrece Radford, Hunter Cattoor and David N'Guessan stepped up to score 31 of Virginia Tech's 35 second half points.

"He [N'Guessan] had six points and I think he had two 'and-ones' in the first half," Young said. "He had nice minutes in the second half and nice contributions. He defends. He's smart.

"Tyrece [Radford] was terrific, yet again. Hunter Cattoor really picked up our wagon [when] we were up two with the ball and he hit a big shot. ... It is a true team. They don't care who gets the credit and that is a fun group to be a part of."

Known as "Boots" to many, Radford has become a popular player in the first two years of the Mike Young era. He posted a double-double against Duke (18 points, 12 rebounds) and was clutch in crunch time against Wake Forest, dropping 20 points on an efficient six of seven shooting, including hitting eight of nine free throws.

The Baton Rouge native was fouled three times in the final 45 seconds and knocked down all six of his attempts from the charity stripe to ice the game.

That was Young's message to the redshirt sophomore when he stepped up to the foul line.

"Of course all of the pressure is on you, but you just have to step up to the line and forget about being tired," Radford said. "These free throws can change the game. You have to be a different animal."

And that he was. He was there when Tech needed it most, from hitting clutch foul shots and scoring important transition buckets, though he had help from his teammates off the bench.

Cattoor, the sophomore guard that averaged 7.7 points per game entering Sunday, has been Tech's secondary ball handler since Cartier Diarra opted out in December. He's also shown his prowess on the defensive end, drawing a team-high 12 offensive fouls through 13 games.

Even though that didn't happen Sunday, he was special in other areas, including helping spark the Hokies. The Orlando native hit three of his five three-point attempts and scored 13 points, including ten in the second half.

Couple that with the play of the freshman N'Guessan, who hails from De Lier, The Netherlands. The 6'8" forward entered the contest averaging 1.6 points and 8.3 minutes per game, having totaled 19 points on the season.

When the Hokies couldn't find a rhythm on the offensive end, particularly from the frontcourt, N'Guessan stepped up and scored 13 points. He sunk all five of his field goal attempts and gave Tech an interior presence yet to be seen this season.

"It just shows you that everything doesn't rely on those two [Aluma and Cone], even though they are big pieces," Radford said. "David [N'Guessan] came in and played big minutes and did some big things for us. He got us actually going tonight. We just have backups that can come in and contribute too."

"I came in the game looking to help the team and make the right plays, and that's what I did," N'Guessan said. "My teammates found me and got me the ball in the right spot."

The trio of Radford, Cattoor and N'Guessan scored 46 of Virginia Tech's 64 points and made 16 of 19 field goal attempts. That's 72% of the Hokies' total points on 84% shooting.

"I haven't really seen either one of them [Aluma and Cone] have a tough night," Young said. "I credit [Ody] Oguama and I credit the Demon Deacons. They were chasing Jalen [Cone] as hard as he'd been chased and he couldn't get unglued and going."

"We know how good Jalen Cone is," Wake Forest's Williamson said. "I didn't even know we held him scoreless tonight."

The 48% Virginia Tech shot from the floor on Sunday is the second-highest shooting percentage for Tech in ACC play this season, trailing only 50% vs. Duke. Yet Wake Forest kept the game close, in large part thanks to rebounding and tough perimeter defense, allowing Tech to make just four of 18 (22%) three-point attempts.

"We didn't shoot it particularly well, obviously," Forbes said. "We made two of those [threes] late but defensive rebounding kept us in the game. We grinded it out against a team that really can play late in the possession. We turned some defense into some offense."

After posting a +17 rebounding margin against Notre Dame and plus-one against Duke, Wake Forest bested Tech on the boards by 7. The Deacs grabbed 16 offensive boards which led to 16 second chance points. For comparison, Tech had seven in both categories.

The 16 offensive rebounds are the most the Hokies have given up in an ACC game in the Young era and the second-most in any game over the past two seasons, one shy of Michigan State's 17 in Maui in 2019.

In terms of three-point shooting, the 22% is the second-lowest clip of the season for Tech, just ahead of 15% against VMI. The previous low in ACC play for the Hokies was 30% against Louisville and Notre Dame.

Tech has shot a mere 32.3% from three through six ACC games this season, which is good for 12th in the conference — a surprising statistic for a Mike Young-led group.

On top of the sub-par rebounding and three-point shooting, Wake Forest forced 15 turnovers, which is one shy of Tech's season-high in ACC play of 16 against Clemson. As previously mentioned, that led to 17 surrendered Wake points.

Yet, despite the poor shooting from deep, bad rebounding and gifting Wake Forest transition buckets, the Hokies found a way to win. Past Virginia Tech teams, including last year's bunch, struggled to do so when the three-point shot wasn't falling and the old reliable scorers were having an off-night.

Against a Wake Forest team that is tough defensively yet poor on the offensive end, the Hokies played their cards right. Sure, it might not have been what Young envisioned, but Tech got the job done and showed how dynamic and well-rounded it is.

More importantly, the Hokies picked up a road win in the ACC, which Young knows are tough to come by, and sit at 5-1 in the conference for just the second time ever in its 17 seasons in the league.

Throw it back to Seth Greenberg's 2006-07 squad of Jamon Gordon, Zabian Dowdell, A.D. Vassallo, Deron Washington and Coleman Collins — the group that defeated No. 5 Duke (in Cameron Indoor Stadium) and No. 1 North Carolina in the same week — the other time it happened.

That team ended up finishing third in the conference and was one win away from clinching the regular season ACC crown (a disappointing 75-74 loss to Clemson on senior day killed that chance, this author's first Virginia Tech basketball game). The Hokies clinched a No. 5 seed in the NCAA Tournament, too.

This team is similar, though. It won two games against AP Top 25 teams (No. 19 Clemson, No. 19 Duke) to reach 5-1, and Young was asked if he was surprised about that start.

N'Guessan looked awesome in bits last night and Radford was nasty. We really need to clean up on the offensive end though we are way too sloppy with turnovers to make a legit run at an ACC crown. Honestly Catoor and Cone are probably our best offensive guards set but would be interested to see Bede and Cattoor play some together to keep Bedes defensive game out there with cattoor who to my eyes looks more comfortable running the offense.

The fact that it is mid-January and we seriously talking about a team picked to finished 11th making a "legit run at an ACC crown" is awesome. Love Mike Young and this team!

Wake was determined to keep Alum and Cone from beating us, and they succeeded, but still lost. At least a third of our turnovers, probably closer to half, were trying to force the ball in to Alum when it really was not there. The other half were players driving into the middle but being predictable in looking for a pass instead for forcing contact and putting it up. Wake did a nice job or scouting us, and gave better teams a good plan for beating us. Hopefully MY will continue to self scout and adjust.

I would disagree, the last two games Aluma just hasn't been able to catch or finish when he managed to catch the pass. The opportunities have been there for him to score but last night he missed at least 3 point blank shots and mishandled 4 more passes that led to turnovers. He seems to have a case of the yips and I hope he gets it solved soon. He converts even half those opportunities last night we are talking about a comfortable double digit victory.

My wife has become a serious fan this season and has mentioned the same thing in both games.

This was a great, gritty team win. All road wins are big in the ACC, and this Wake team is much better than their record. They had a month long pause and a brutal opening ACC schedule.

As for our club, he is by all accounts a great young man, but Bede needs to continue to see his minutes reduced. Opponents are basically playing us 5 on 4 in the half court when he's in the ball game. When he is on the perimeter, they collapse down on Aluma and Mutts. He also still really is not a threat when driving to the basket, despite a strength advantage over most guards. I'd like to see him go strong to the rack or stop and hit that 10 foot jumper a bit more. But, we're just not seeing it. Instead, it seems like our leads evaporate until we sub him out for Cattoor.

Let's hope we continue to build momentum with no slip ups before a big matchup with the wahoos in 2 weeks.

Still getting annoyed at the 1-1 on the road. We are actually 4-1. We played 3 games in Connecticut that is not home...

I don't get this comment. It's not a home game but it's not a away game. It's a netural site game🤷

4-1 away from home but not 4-1 on another team's home court. Either way, there's hardly a home court advantage this year.

Finding a way to win the ugly games? AND winning the games you're supposed to? This is a special team and I'm going to enjoy the ride.