A near triple-double, a game-tying three-pointer and a clutch drawn charge helped the Hokies escape the Hurricanes in South Florida. 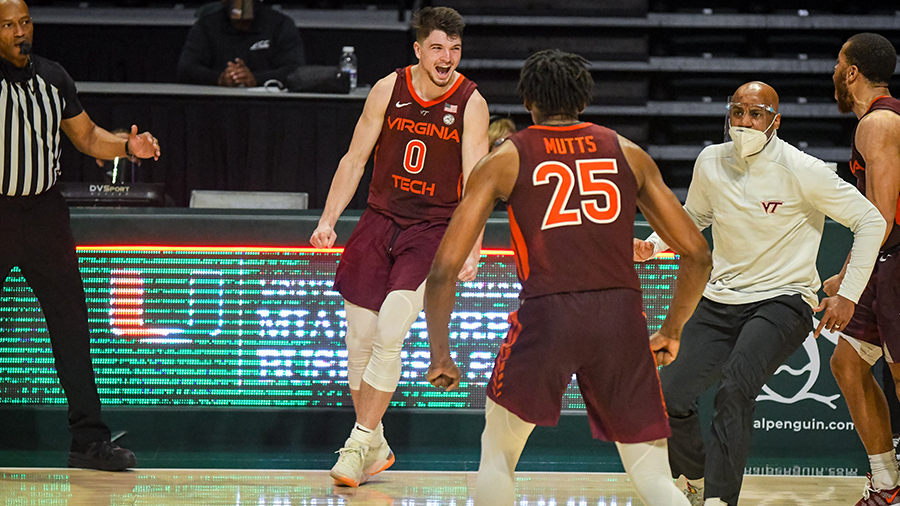 As Miami slowly trimmed down Virginia Tech's second half lead from 11 to one, it felt inevitable the Hokies would let another road ACC win slip away.

Yet when Tech needed it most, Hunter Cattoor was there, as the sophomore came up with two clutch plays in the final minutes to preserve an 80-76 victory in overtime.

The Canes dominated down the stretch, outscoring Tech 26-15 over the last eight minutes. Jalen Cone was sidelined after the first five minutes because of an ankle injury, Keve Aluma had been quiet, and Justyn Mutts and Joe Bamisile provided the only offense.

Young's crew tied the game up multiple times but couldn't distance themselves from Miami.

After a free throw from Mutts tied the game at 71 with 11 seconds left, Isaiah Wong seemingly drove a nail in Tech's coffin — his three put the Canes up 74-71 with 2.4 seconds remaining.

Tech's upcourt pass was tipped out and it provided Young a chance to draw up an inbound play right in front of the scorers table with 1.7 to play.

Wabissa Bede inbounded the ball to Cattoor, who flashed around a screen from Aluma that took out his defender. He caught it, took one dribble and released the game-tying triple from the left wing.

Back on January 6 against Louisville, he missed a similar heave at the buzzer that would've been the game-winner. In the Watsco Center, there was no question that shot was going in.

"Great poise from Hunter," Young said. "1.7 seconds is not much, but it is enough to shot fake and step left to right, as he did, and he did the rest. It was a humongous shot."

Heroics aside, the Hokies still had to play five minutes of overtime. Tech ramped up its defense and didn't allow a field goal during the entire period.

Leading by two, 78-76, with 25 seconds to play after a floater from Nahiem Alleyne, Tech needed a stop. Cattoor answered the bell again by doing what he does best: drawing an offensive foul.

Elijah Olaniyi drove baseline for Miami and seemed to have a path to a contested layup, but Cattoor slid his feet and drew a charge.