Hokies Outmatched Against Florida Despite Career Night from Alleyne 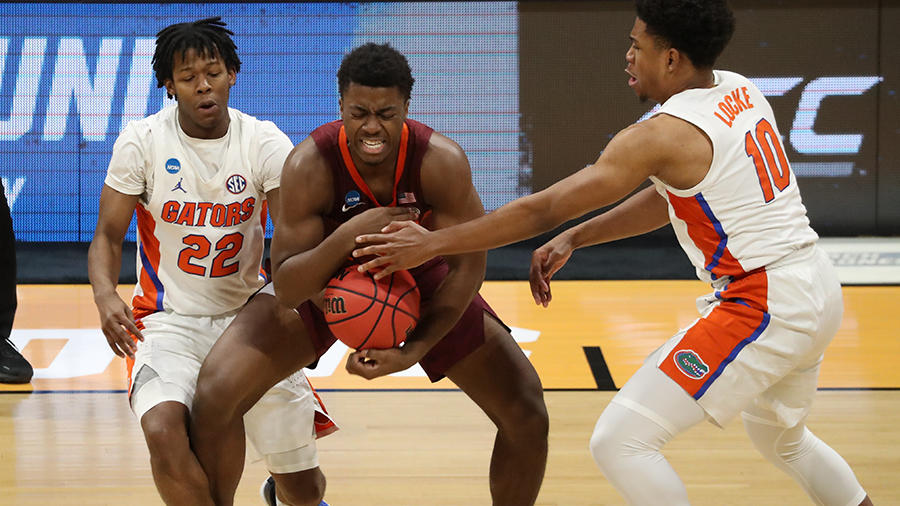 Tyree Appleby #22 of the Florida Gators fights for a loose ball with Nahiem Alleyne #4 of the Virginia Tech Hokies and Noah Locke #10 of the Florida Gators during the second half in the first round of the 2021 NCAA Division I Men’s Basketball Tournament held at Hinkle Fieldhouse on March 19, 2021 in Indianapolis, Indiana. [2021 NCAA Photos \ C. Morgan Engel]

Tre Mann stuck the dagger in the Hokies' heart.

Despite Nahiem Alleyne singlehandedly outscoring the Gators 11-5 over the last two-and-a-half minutes of regulation, including hitting an insanely clutch shot at the buzzer, the Hokies couldn't hang with Florida in Hinkle Fieldhouse, falling 75-70 in overtime in the NCAA Tournament.

"Sometimes in this business you think you know how things are going to play out in terms of pace on either end of the floor and that's not exactly what you're going to get," Virginia Tech head coach Mike Young said postgame. "This was a really good Virginia Tech rebounding team, and Colin [Castleton] and [Anthony] Duruji and the rest of the Gators outrebounded us by a pretty good clip. And then we just couldn't get stops.

"We were where we wanted to be and were in good shape, and then we didn't handle some things very well."

The Hokies were outgunned against the Gators in the second half after Keve Aluma (7 pts, 7 reb) and Justyn Mutts (6 pts, 5 reb) fouled out.

After scoring four points on two-of-three field goals in the first half, UF's 6'11" forward Colin Castleton was unstoppable in the second, finishing with 19 points and 14 rebounds. He added three blocks, too, including a game-changing rejection on Tyrece Radford in a four-point game with 1:06 to play.

With Aluma and Mutts in foul trouble, Castleton had himself a day. Florida found him on almost every possession in the post, and even if he didn't score, it opened up opportunities for his teammates.

Starting point guard Tyree Appleby left the game in the second half after he caught Aluma's elbow in the head, but the Gators didn't hesitate; instead, they turned it up a notch, and Castleton was a big reason why.

Tech was forced to double him in the post, especially with Aluma and Mutts in foul trouble and once they fouled out. It also didn't matter that VT forced 18 turnovers, tied for second-most for the Hokies in an NCAA Tournament game.

Florida was able to move the ball around the perimeter and find the open shooter, and Mann (14 pts), Scottie Lewis (15 pts) and Noah Locke (10 pts) all knocked down big baskets.

Alleyne carried the Hokies on the offensive end with the absence of Jalen Cone and Aluma and Mutts having quiet second halves. Alleyme scored 21 of his 28 in the second half, the second-most points in a NCAA Tournament game by a Hokie, one shy of Glen Combs' 29 in 1967.

He hit shot after shot to keep Tech in it, even after the Hokies did not score for stretches of two, three and four minutes at a time in the second half.

"He [Alleyne] has had a great year," Young said. "To do it on this stage and to do it against the Florida Gators, he was terrific. He had a great look and bounce about him. I thought he was really, really good on lock. He was matched with Scottie Lewis a couple of times. Just a tremendous performance. I'm pretty proud."

Radford complemented Alleyne with 18 points on 7-of-15 shooting, while Hunter Cattoor added 11 (nine in the first half). The performance wasn't enough to upset the Gators, even after Alleyne's heroics to force overtime.

The loss ends the Hokies' 2020-21 campaign, a year that saw Virginia Tech compile program-defining wins over No. 3 Villanova and No. 8 Virginia. The Hokies finish 15-7, 9-4 in the ACC after a third-place finish in Young's second season at the helm.

It was an improbable tournament bid given Young had to rebuild the roster he inherited from scratch. Additions of Aluma and Mutts in the transfer portal and the recruitment of the core sophomore class — Alleyne, Cattoor, Cone, John Ojiako — have turned the Hokies into a contender in a short time. And the future burns brighter.

Tech recently received a commitment from coveted point guard transfer Storm Murphy. The Wofford product earned All-SoCon honors and averaged 18 points per game this past season. Combine that with a talented young nucleus, a slew of returning veterans and the Hokies are poised for an even better year three under Young.

"We'll be back next year, for sure," Nahiem Alleyne said.

Nothing like a taste of the meal to whet the appetite. I look forward to seeing how hungry these Hokies are next year!

Appreciate everyone reading, commenting and sharing all of my basketball stories over the past few months! It's been such a pleasure to be apart of this community, and I'm very thankful for everyone embracing me so quickly and keeping up with my work.

If you're back next year, could you include a box score at the end of gamers?

Great writing bud, keep at it. Really enjoyed the recap, I was unable to watch here in Texas.

The whole ACC will be better next year. With very few draftable players, every team comes back thinking they'll be stronger. Hopefully Tech improves more than they do

Tech needs a true big man. I hope N'Guessan and Ojiako can take a big step forward. Aluma seems to struggle when he has to both guard and score against a good big man. Letting him move to the 4 and N'Guessan or Ojiako play the 5 would make a very good team, especially if Storm comes in as a scoring PG. The future looks bright.

I thought the turning point was when Keve hit Appleby in the head. VT seemed kinda tentative for about 2 minutes after that as if they were spooked by all the blood or felt sorry for Florida. The intensity came back after a couple minutes but the momentum had swung and we couldn't get it back.

You mean the play that should of been a player control foul on Appleby, regardless of the blood, and should have led to the Hokies having two more free throws later due to foul totals, in a game that ended up tied at the end of regulation? Yes, it completely took Aluma out of the game which threw off rotations and had a major impact on the rest of the game.

I consider you THE basketball guru on TKP. And I'm sure I speak for many when I say thank you for all the content you have provided all season! You contribute so much to this site.

But while I agree that play had a big negative impact on VT, I also feel like it's really hard to call a foul on a guy who's bleeding all over the court. It might be the "right" call, but I just don't see a referee at any level calling a foul on the defender on that play.

He was in the wrong place doing the wrong thing. Minus the blood it would have definitely been a foul from an impartial crew.

Unfortunately, after the technical to open the second half I knew we weren't going to have an impartial crew.

They are picking their butts while the injuries are tended to and no one in stripes seems to have a clue. Should have been reviewed and a cylinder call made on Mann.. that's the rule.

We struggled all season with physical teams. We played an outstanding half against a physical UNC team and another very good game against an even more physical Florida team. Remember FAM, we are still pretty young. Lots to look forward to!

Hey, what was the deal with Ojiako this year? I'm guessing it was nagging injuries of some kind. Even if he comes back healthy, we probably can't count on him to have any consistent offensive game, unless he takes a big step forward, so the best we can hope for is someone to spell our big men when they need a blow or are in foul trouble.

Also, related to Bede, he came here as a pretty highly touted recruit, so I imagine he had some kind of offensive game when he arrived. I can kinda see why he didn't want to be aggressive offensively with all the offensive talent around him, and when JRob went down, there were times when you could see Bede turn up his offensive game. Just a shame he couldn't turn it on once JRob was gone, because even if he wasn't an offensive machine like JRob, just the threat of offense from him would have benefitted the rest of the team. Without any kind of offensive threat from the PG, you're basically going with 4 vs. 5, and 5 usually wins. That's why I'm optimistic going into next year with Storm, who should give us a JRob-like presence at the point. Combine that with the added development of everyone returning, and it could be a very special year, barring injuries.

Ojiako has a world of talent; remains to be seen if he'll be healthy enough to get the experience he needs to develop it.

RE: Bede, when he was recruited, I thought he would be one of those classic Big East type of guards...thick and strong...physical in the lane...throw a shoulder into a defender and get his shot...decent mid range game...mug the opponent on defense. And to me he looked super quick his freshman year; I thought he was the real deal.

My perception is as he developed physically, he lost a teeny bit of his quickness on defense (though still very good) but he never really matured into a physical player on offense; getting tough in traffic and banging around and getting his shot. And as much as he is a MY kind of guy team chemistry- wise, he is not a good fit for MY's offense where the PG has to hit the open 3.

Bede seems like a really good guy with a great attitude; he has represented VT very well; and I hope he has a great career as a coach...maybe starting as a GA for us next year.

Ojiako had a meniscus injury in November and wasnt ready to play until early January, after which I imagine there were conditioning issues plus rotational issues, and then most of February was cancelled which made it harder.

2000 is right and it had an affect on the out come of the game. Appleby put himself in harms way by being inside Aluma's space and appeared to be pushing hard with his lower body. The announcer even said Appleby was in the cylinder. Do not want to see anyone hurt but the ref has a responsible and is paid to make the correct call here not to judge by appearance.