Anatomy of a Win Streak

Between hot shooting and attention to detail, Mike Young and the Hokies find themselves surging up the ACC standings. 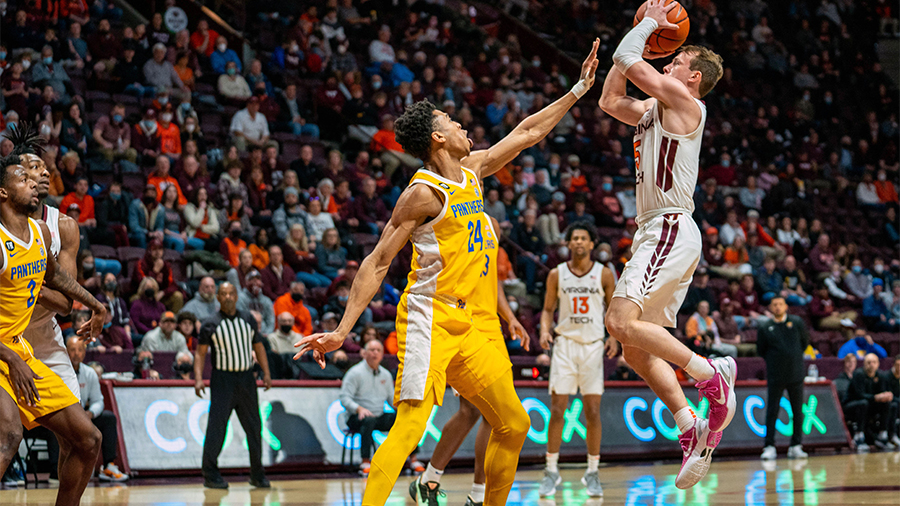 Don't look now, but the Hokies are hot.

After a beatdown of Georgia Tech and a pair of wins over the lowly Pitt Panthers, Virginia Tech now enters the home stretch of ACC play riding a four-game win streak. They are playing their best basketball of the season, with the offense clicking on all cylinders. Will it be enough to carry them into the postseason? Stranger things have happened.

In dissecting their recent success, I can't help but give credit to the Hokies' bench. David N'Guessan and Sean Pedulla played 26 and 22 minutes, respectively, in Monday's 74-47 trouncing of Pitt. Throw in Darius Maddox, who is now a reliable scoring option, and even John Ojiako, and you have a starting five that is more rested and therefore more effective. Hunter Cattoor has played his fewest minutes totals in conference each of the past two games, while Keve Aluma has been on the court just over half the time. Now, the Hokies will be adequately rested going into Saturday's contest against Syracuse, having put the most physically taxing stretch of the season behind them.

To be sure, the competition during this win streak has not exactly been Murderers' Row. Florida State has been besieged by injuries, while the Yellow Jackets are bottom-dwellers in the ACC standings. So too is Pittsburgh, losers of six of their last seven. But the Hokies did exactly what a good team should do against a bad team: beat them by a lot. As a result, Tech now has a positive point differential (+14) in league play, and point differential is one of the biggest predictors of future win-loss record.

As you might suspect, the key ingredient to the winning streak is shooting.

Virginia Tech's offense continues to excel. The Hokies now rank 18th in AdjO on KenPom and have the most efficient offense in ACC play. This is not just because of three-point shooting — after all, Tech is shooting 54% on 2P field goals — but the effectiveness of their offense does stem from their ability to hit outside shots. The concept of "pace and space", which uses shooters and quick tempo to spread out defenses, has been popular in the NBA for about a decade. Mike Young will never play fast, but the roster that he has constructed brilliantly displays small-ball basketball at its finest. Tech has so many good shooters on the court that they are now a nightmare to defend.

It's no surprise that the improvement of the Hokies' offense has correlated highly with the improvement of their point guards. Storm Murphy continues to exude confidence in getting to the basket and shooting off the dribble. I figured his poor three-point shooting earlier in the year would revert to his career norms, and it has: Murphy is now shooting 39% from downtown, and has made 50% (9-of-18) over his past three games. We are also seeing him attack the rim and finish over taller and longer defenders, a skill he displayed at Wofford.