Shooting for Success: Thoughts on the Hokies' 10-1 Start

The Hokies have made the most of their non-conference slate, securing a quality 70-65 win over Oklahoma State on Sunday. A few thoughts on where the team stands heading into the winter break, bigs that can shoot (*cough* Grant Basile) and rationalizing Darius Maddox's shooting slump. 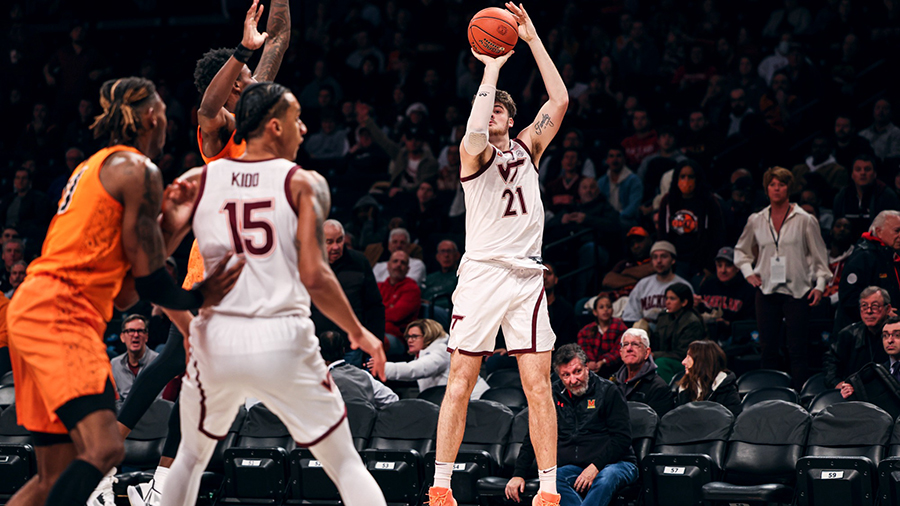 Stop the presses: the Hokies are hot.

The Virginia Tech men's basketball team is off to a 10-1 start in the 2022-23 campaign, and continues to stockpile quality wins as the non-conference portion of season winds to a close. Their latest triumph — a 70-65 win over Oklahoma State in Brooklyn on Sunday afternoon — showed just about everything the team is made of. The Hokies shot just 34% from the floor in the second half. Justyn Mutts played only 26 minutes due to foul trouble. Hunter Cattoor made one field goal the entire day, and still Tech found a way to win.

It was a matchup similar to the first round game against Texas a season ago. Tech faced a team that is long, athletic, and physical, with a ferocious defense that makes quality three-point looks hard to come by. But if the measure of a great team is what they do when they don't have their A-game, the victory against the Cowboys is as impressive as they come.

Speaking of which, I have good news! Recently, I obtained a subscription to the advanced stats site ShotQuality, which assigns a point value to every field goal attempt for every college basketball team. This data is extremely valuable because it can help us determine which players are generating the most quality looks — and by extension, better explain why certain players are performing well or struggling. Shot quality is the foundational ingredient to winning basketball; the teams that win generate the most high-quality looks. Of course, the definition of a "high-quality" look is highly dependent on personnel, and the Hokies have a very good cast of characters in place.

With that being said, here are some brief ruminations on the Hokies' fantastic start to the season.

Earlier this week, I was thinking to myself: how many big men are there that can shoot the three-ball like Grant Basile?

This season, the Pewaukee, Wis. native is shooting a lights-out 43% from downtown on 61 attempts. According to Bart Torvik, there are only 41 Division I basketball players that are 6'8 or taller and have attempted at least 40 threes. Among these players, Basile ranks eighth nationally in 3P%.

Over the last five years, Virginia Tech fans have seen their fair share of big men who can shoot. Keve Aluma is an obvious example, and you can even go as far back as Kerry Blackshear, Jr. during the Buzz Williams days. Now, Basile has taken that mantle. Shooting is a prerequisite if you want to play in the Mike Young offense, even if you are a forward. But it's important to keep in mind just how rare of a skillset that is. There just aren't many players that can do what Basile does, and it makes the offense so much more versatile.