Versatile and 'analytical' OL prospect Harris picks the Hokies, who were there from the start

Harris details his Virginia Tech commitment along with details on his from his high school head coach. 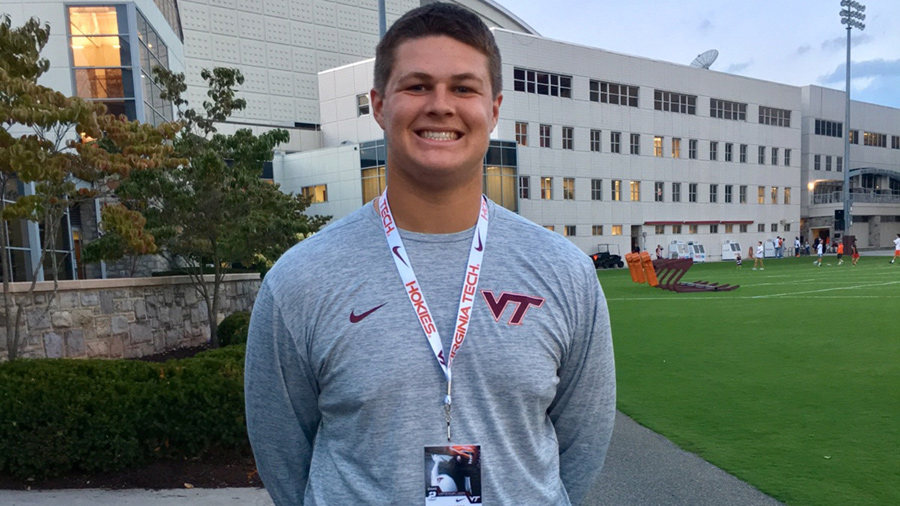 Around this time last year, John Harris got his initial interest on the recruiting trail. His first two major offers came from North Carolina – on June 17 – and Virginia Tech just five days after.

Three hundred and fifty three days later, the Georgian made his decision.

He'll be a Hokie, as announced on Saturday.

Harris wasted no time in response to a query about Tech's initial interest. Did the early connection mean more than say, schools who got in the game amid the season or those who came after last signing day's completion?

"This is a case where I think it's a positive thing for the school and the outlet," Jarvis said. "John, he's done. He's a firm commitment, he'd sign the papers if they were in front of him.

"He's very analytical and if he visited somewhere, he did his homework behind it and why. Just very strategic and analytical in his decision making."

The 2017 campaign will mark Harris' third as a starter for Mill Creek High School, located in the Atlanta suburb of Hoschton. In the Hawks' offense, he played tackle for the shotgun-based scheme.

A bevy of running backs and power rush game will see Harris move inside to the strong-side guard spot. The lone returner off a solid line last year, he could possibly see time at center, too. Mill Creek primarily zone blocks.

"My strength is my footwork, the quickness of my feet," he explained.

But, some other attributes stood out to the Hokies' staff.

"They like my hands, the way I can work them," Harris said. "That, my feet and just my nastiness."

He's listed as the No. 41 prospect at guard in the nation, per 247Sports Composite rankings.

Originally, Jarvis and his staff penciled in Harris as a defensive lineman early in his career with the long-term plan to put him on the offensive line. However, injuries allowed the youngster an opportunity to rep out on offense sooner rather than later as a sophomore.

Film grades made Jarvis' decision for him.

"It's really his athleticism that stands out," the 14-year head coach said. "He came into our program in ninth grade as a tight end, a defensive line-type player. He just bends well for his size and you put that with his work ethic, it makes him a great football player.

"He's been tremendous for us. He's one who to me, will only get better when he's in college because of his internal drive. One question I get from coaches is, is this a kid who loves football? Sometimes, I question how much a kid might love the sport. John is a young man who just loves playing football and preparing to play football. I think he's got unlimited potential."

A May offer from Michigan State prompted Harris to visit East Lansing last weekend. He'd narrowed his list down to Tech and the Spartans.

Once he took the trip up north, the articulate high schooler made up his mind.

"I took the visit and things went well but it was kind of too far away and maybe not as good a fit as Virginia Tech," he detailed. "That kind of sealed the deal for me."

A sturdy bond with offensive line coach Vance Vice made an impact.

"I thought he was very genuine and didn't try to put on a face in recruiting," Harris said of Vice, who followed head coach Justin Fuente from Memphis to Blacksburg last year. "He told me straight up, 'John, I don't really know how to do all this recruiting stuff,' and I liked that because that's who he really is and not some fake persona. I was glad to see that."

Despite his humility, it's clear Vice does pretty well on the trail. Jarvis took note of that.

"I deal with a lot of recruiters and (Vice) did a phenomenal job recognizing John early," Jarvis, who saw 16 of his 2016 class sign to play college ball and more than 10 in each of the past five years. "He looked at a couple of older lineman and asked, 'What's the deal with him?'

Vice fit the mold of someone who knew the skillset he needed. That desire led him to Harris and that early interest that ended up a crucial part of his desire to wear orange and maroon.

After "four or five" visits to campus, Harris knew his comfort with the Hokies as authentic.

He also connected the dots that many Tech fans hoped would become reality after Fuente's first go around at the helm.

A 10-win season to start the tenure opened new avenues for top players across the eastern seaboard and in some cases, the country.

"I think it's going to be very special once Fuente gets all his guys in here. Other recruits see that as well. That's a big reason I picked Virginia Tech as well, I think we can win and do big things."

He looks impressive. I like that he continues his effort through the entire play, normally pancaking his opponent. This is great since it will wear them down as the game progresses. Who ever is the QB, and our RB's will love having this beast on the o-line in front of them. I look forward to seeing him develop. Start jumpin'!

1. I appreciate a highlight film void of music. Helps me focus.

2. We have a clear successor to Wyatt in terms of a big mean, nasty OLineman.

We have a clear successor to Wyatt in terms of a big mean, nasty OLineman

I also saw a lot of Tyatt in his attitude on the blocks. Going for multiple pancakes on every play.
It would be nice if he does develop as a center this year. It's been a while since we've had a dominant option there.

"He told me straight up, 'John, I don't really know how to do all this recruiting stuff,'

I mean hey, whatever works!

That approach is not working for the UVA staff.

I see Vice's got the ol' coach speak down:

"I dunno how to do all the recruiting stuff..."

"I dunno how to do all the recruiting stuff..."

Jarvis, who saw 16 of his 2016 class sign to play college ball and more than 10 in each of the past five years

"I think it's going to be very special once Fuente gets all his guys in here. Other recruits see that as well. That's a big reason I picked Virginia Tech as well, I think we can win and do big things."

So what you're saying is that now that we have one quality OL recruit, they'll multiply like tribbles?

yes, and in doing so, they lay waste to the food stores of our enemies...yeah I guess the analogy only goes so far.

Love it! this episode was on last night

You had my curiosity at "Analytical OL Prospect picks the Hokies", but when you said "geosciences", well now you have my attention.

As a fellow Houston Hokie with a degree in Geosciences working in O&G, I couldn't agree more!

Guys this kid is gonna be a crowd favorite. That first pancake was against McEachern in the State 7A Quarter Final game last year (both schools had like 15 players signing offer sheets in Feb). The game was a battle between two senior QB's who were both headed to Div I Schools next year. The McEachern QB is headed to FSU. Their coach was frustrated because he was not getting pressure on the Mill Creek QB and the Hawks were keeping pace with the Indians (21 all at the half). In the second half the Mill Creek defense started to dominate and they took a 3 pt lead going into the 4th quarter. The McEachern coach took his outside linebacker who had been having a very good game and put him over Harris to create pressure. The result was the highlight moment pancake. The indignity of that "Blind Side" moment pancake made the McEachern kid go berserk and almost got him a personal foul. Their coach had to sit him down to calm down for a series before he got back in the game. Mill Creek went on to win 31-28. My daughter plays in the marching band and I have watched Harris for the past two seasons grow as a player.... Vice got himself a good one here.... think Jake Grove but bigger coming in. As I recall, it took Jake a couple years in the weight room to pack on the size and I think Harris will end up well north of 300 when he starts working with Hilgart.

Thanks for the "local" insight to the "promo" films provided. It is greatly appreciated to hear the supporting story around the games on the film. It definitely provides a more complete picture.

Check out the 3rd clip from the hudl film. When he pancakes that DE it look like the kid's leg folds up on him all kinds of nasty.

So Harris finally made it here huh? We can always use a good running back.

I heard they're looking to coach him up as a tight end, but I really hope not because that might cut into Lawson's reps and push him to transfer

Running back? I thought he was a tight end in high school. I'll have to check the newspapers to confirm.

I thought TEs were QBs? Or is it the other way around?

There's something about a O-Lineman with 57 on his jersey. Makes me (and pancaked defenders) tear up.

I like this kid a lot. Hilgart'll get him beefed up, we need DeChristopher to come back on staff to get him Bearded!

The Beard Potential scale rates him at 6.5.

To be fair, Blake himself only scored an 8. No one's ever gotten higher than that.

I'm impressed with your humility, only giving yourself an 8.

Well, if we can't Beard him, we'll Mullet him!

This is and will always be glorious.

He plays with a high motor and wants to punish the opponents. I love it. He is a throwback to the late 90s Hokie offensive linemen who just brought it on every single play and played with serious chips on their shoulder. I like that about Vice because I feel that is his personality and influence, even though the technique might not quite be 100% at all times there is no lack in intensity. Over the course of 60 minutes that's what wins football games. Planting your guy in the dirt more than he can plant you and exerting will on the opponent. Damn when does the season start??!!

Amazing hands;
Quick off the ball;
Super body control/center of gravity for a guy that tall;
And plays like the defense called his mother a name. An 'echo of the whistle' player.

On film - and maybe between the ears too - he's as "Big Time College Football"-ready as any VT OLine 'croot I've seen us get in years. Reminds me of Landon Dickerson - and will remind me of him even more once he gets Hilgarted.