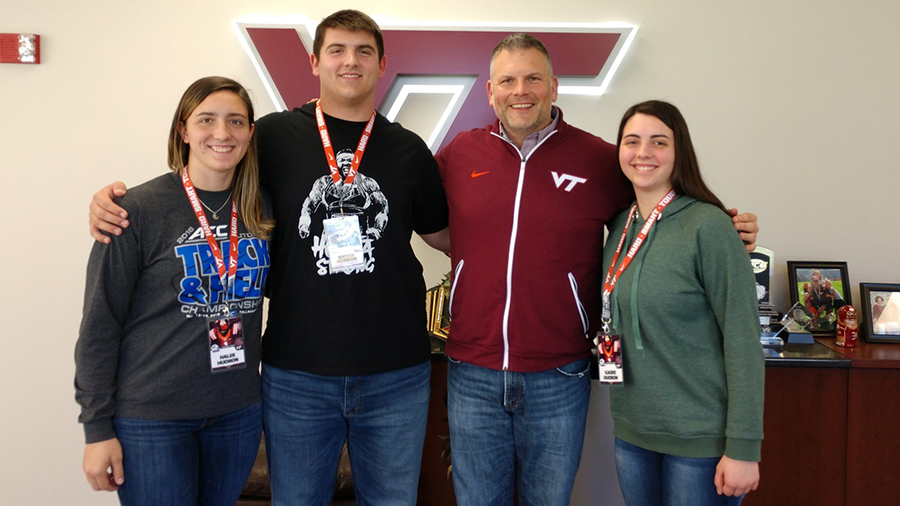 Thank you to everyone who has helped me with this process. I'm truly humbled by the faith shown in me by the 24 schools that have offered. I'm thankful to my parents, my coaches, teammates, family & friends. I've found a HOME where I will further my football and track career... pic.twitter.com/4bt5yGPAsU— Bryan Hudson (@HudsonBryan) April 10, 2018

Throughout his recruitment, the Scott County HS (Kentucky) product maintained the Hokies as his leader citing a strong relationship with Vance Vice and Justin Fuente.

"I love him," Hudson said of Fuente in January. "As a coach, I love the way he approaches the game, and his attitude and mentality towards his players and the team. As a person, I love the times I've gotten to sit down and talk to him. He seems very genuine and very honest with me and my family. I really like him a lot."

Tech offered Hudson in April 2017, and stressed how important the 6-5, 305 pounder was to the Hokies' class.

"They said I'm one of the top priorities for them, especially in my class," Hudson told The Key Play in April. "When I get there, they said I'm a pretty versatile offensive lineman, I can pretty much play from tackle to tackle, guard, center, whatever. Kind of whatever they need."

Regardless of what position Hudson lines up, expect him to play with physically in the trenches.

"I just love the physical aspect of it," said Hudson of offensive line play. "When I was younger my favorite position was actually the defensive line. That was because, you know when people ask what they like about football and what they like about defense, defense is where they get to hit people. When I got to high school and where I was only playing offense, my freshman year, I realized how offensive line is so physical. It takes somebody that really has a passion to play football to play because it's so physically demanding play after play. You know to move 250-, 300-pound guys out of the way. With that being your only objective every play, go defeat this one or two guys. I just love playing it."

I think you mean

because he's going to be giving opposing D-linemen the business. Cornerstone of this recruiting class. Ford and him are a product of relationship built recruiting is about. He is a great fit for this culture.

Ford is my guess for VT. I haven't heard anything and I was making a general statement. I dont think he is gonna pull the trigger this weekend but I think we lead larger than most people think

God I hope you're right, bc the Bucknuts are doing their normal thing after his visit and the CB.

is he a football player running track or a track star playing football? <<

Except right down the throats of defenders, amirite?

This is awesome news. Him and Hanson look like great OL prospects. If we could land Simonds as well this would be one of the better classes in recent memory. OL is looking bright, great job by Vice and the staff!! And a great start to the Spring game week...let's build on this momentum!

Knocking over defenders like dominoes in that video. Bring it to Blacksburg! Welcome to the Hokie Nation.

Awesome news! This is the kind of guy we need to be landing on the OL to take the next step.

That was an awesome announcement video! Happy Hokie right here!

Hell yeah, man. I love it! Welcome to Hokie Nation Current status of the hype train... get on board...

how are there not more one-eyed cows

Hudson is mobile and does a terrific job of getting himself into the proper blocking angles and he is really strong. I think his biggest avenue for growth this year is working on getting good hand position and explosive extension to control defenders. I really like him and John Harris as the future inside.

French..... totally agree on this pair forming the core of a truly great hokie OL. Do you think Harris could end up a center before he's done? He only played tackle and guard in HS but with his athleticism, and ability to operate in tight spaces I could see that.... saw a pic of him walking into Lane for the spring game and he was chatting it up with Carroll.... looks like Quincy wasn't the only one recruiting....

Is he the best Oline recruit we have had in a decade?

Teller was the most talented. Hudson has a really nice upside at guard. I think he will be good.

Only for the websites :)

And those who see the websites as god's final word...

When you watch so many of these targets by Vice, the one thing that is consistent is that they keep their feet going through contact. In the past, the VT recruits that became effective OL were guys who may not have been dominant on film, but at least kept their feet active and stayed engaged on blocks. Now we are seeing commitments from players who have that dominant upper body strength and finish AND have light active feet. Right now, you have to feel really good about the talented depth on the VT interior line. I like the young offensive tackles (and it sure sounds like Silas and Darrisaw, R-FR and FR are more ready to go), however I think there are more guys on the interior that could be really really good.

Does that not contradict what you've said about how Vice coaches our guys to block? Maybe these are two separate things but I remember you said Vice coaches a more passive type of blocking that sort of limits our line from running through their block.

Either way, I am very excited to see big, strong, athletic kids coming here that already have a solid base but high ceilings. I have to ask, do you like Harris or Hudson more inside?

He teaches them to be passive on pulls and scoop techniques. I don't like that technique, however it still requires active feet or you can't adjust and stay engaged on the block. Perhaps even more so because, in essence, they are pass blocking on run blocks and you have to react to the defender.

Ah, thanks for the clarification! Looks like these guys will be a great fit then.

Isn't it much better to go and attack on the run? I would think this would frequently lead to a bigger push.

Sounds like we will have a great OL for a good back or two to run behind. If I were a high 4-star running back from Virginia in the '19 class I know where I'd want to be.

That's exciting to hear. I'm so sick of oline being a recurring position of weakness for us.

Devyn Ford must be thrilled to have him up front.

This guy doesn't play to the whistle. He plays until they are setting the ball up for the next play!

I'm sure that I saw at least one double stack in that video.

Add in Riley Simmonds, Jakai Moore and this could be some talent for a while.

Then we can focus on adding Kevin Pyne, Altrique Barlow, and maybe Anton Harrison for 2020

I really liked his Twitter announcement using the discus and Enter Sandman to identify VT as his choice.

Just lucky it landed on VT.

Who was on the other side?

You can never go wrong with Enter Sandman!

Big fan of the highlight video at around 1:14. Locks in on the downfield defender and never gives the kid a chance. Granted, the kid wasn't a terribly big, physical looking player, but the route Hudson takes to get there and the work once there is awesome.

Have to hand it to Vice. I made a comment about concerns with OL Recruiting last year and about a week later he reeled in Culver (from a healthy amount of competition) and he has been totally on-fire ever since.

The talent level on the OL at VT looks like it will be higher than in a LONG time, much credit to Coach VV.

CJF is building the O-line of the future, quickly! This guy definitely has awesome strength and controls the defense (in the selected films). I like a beefy beast on the left side to protect the QB, whoever it turns out to be.

A safe QB is the beginning of a productive offense and this will spill over to give the Defense rest!

Wow, could we actually control both sides of the ball!?!! Oh happy days are comin'

And they say that uniforms don't help in recruiting....

Never said that, but they do have a direct impact on the outcome of games.

In that case, we should not wear #allmarooneverything anymore. /s

What a great fit for Virginia Tech!

This is my favorite kind of recruit. One who seems made for our program, seems to have a good head on their shoulders, and who looks like they can contribute in a significant way.