The gorgeous weather in Blacksburg for Tech's spring scrimmage attracted quite the crowd to Lane, and it seems to have paid off. 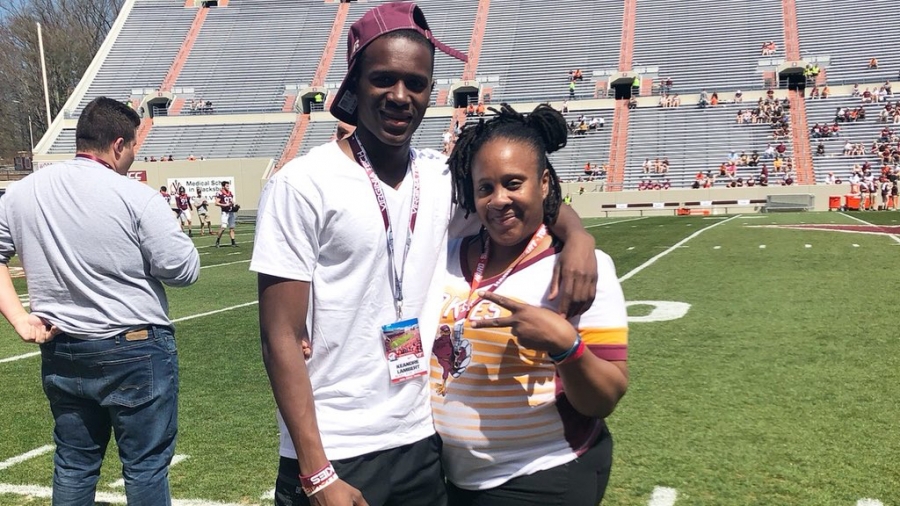 2020 WR KeAndre Lambert thought the energy in Lane Stadium for the spring game was comparable to games he's been to in the fall. [@dre_lambert]

Blacksburg's weather in mid-to-late April can be a bit unpredictable (at best) as the Hokies plan their spring game each year, making it all the more difficult for Virginia Tech's coaching staff to plot a major recruiting weekend with blustery conditions a constant possibility.

This year, however, Mother Nature was kind to the Hokies, delivering some of the most hospitable conditions spring game attendees have enjoyed over the last several years.

That resulted in an estimated crowd of nearly 37,000 packing Lane Stadium, which proved to be quite a boon as Justin Fuente and company made their pitch to some top 2020 prospects on campus for the game.

"It had a Saturday vibe on gameday," 2020 OT Bryn Tucker of Knoxville (Tenn.) Catholic HS told The Key Play. "I've watched the Hokies play on Saturday on TV before, and I just felt like I was in the game, watching TV. It was unbelievable."

2020 WR KeAndre Lambert of Norfolk's Maury HS didn't have to compare the atmosphere in Lane to what he's seen on ESPN — his first visit to Virginia Tech was for last season's GameDay-graced night game against Clemson.

"It felt just like a regular game because there was so much energy," Lambert said. "The energy was crazy, and there were way more recruits than any other time I'd been there. There had to be 50 plus recruits altogether."

2020 DE/OLB Tyler Baron of Nashville's Ensworth HS has more experience than most in Blacksburg, considering he's been coming to games for years to see his brother Woody suit up for the Hokies. But even with that experience, the spring game stood out to the younger Baron.

"It was really cool to see how well they were supported by the people who came to the game, and for it to not have even been filled up, it was real loud," Baron said. "It was great overall."

Of course, Baron wasn't just on campus to take in the atmosphere in Lane — he also had some catching up to do with coaches he's known for years, particularly DL coach Charley Wiles.

"I love Coach Wiles," Baron said. "I've known him for a while now and he's always been the same to me. I enjoy that and appreciate it."

The 6'4", 245-pound prospect is rated a 4-star prospect by 247Sports (the recruiting service has yet to release its Composite rankings for 2020 athletes), and Baron says the Hokies see him playing at either DE or OLB if he comes to Tech. Either way, he'd be under the tutelage of Wiles and Bud Foster, a pair of coaches Baron says his brother has told him plenty about over the years.

"It's great, because I get to get the perspective from my brother," Baron said. "It's awesome to hear that they're the same behind closed doors, that's really what I look for from a coach...(Woody's) given me a few pointers, but really not trying to pressure me to go anywhere, just trying to let me make a decision."

Tucker has no such family connection to his would-be coaches, but he already felt plenty comfortable with the staff on just his second visit to Tech.

"The first time, we were talking about this and that," Tucker said. "But the second time, my family was there with me, we were talking, just having a great bond and relationship, seeing how things were going." 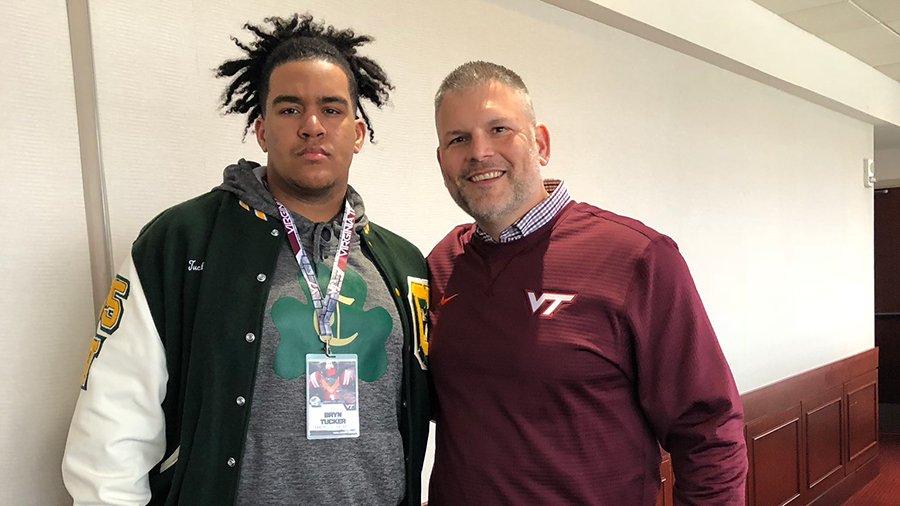 Tucker (a 6'4", 300-pound OT who's also rated a 4-star prospect by 247Sports) was particularly enamored with OL coach Vance Vice.

"He's absolutely amazing," Tucker said. "He played at Oklahoma State with Barry Sanders so he knows a lot about the game."

Tucker expects that the Hokies are most interested in him at tackle, but Vice also assured him he could end up playing "any position that fits the team." More important than any one set position, however, is the effort Tucker shows on the field.

Lambert, a 6'1", 167-pounder who has yet to be rated by 247, says the Hokies told him they were similarly enamored with his game.

"They said I'm a playmaker," Lambert said. "I play the ball well, great hands, great length. They did say they'd like me to work on my speed, but that's something I could develop over time. They want me to get a little bit bigger and faster, but other than that they like me as a playmaker, a total wide receiver and would love to have me there."

And Lambert says WRs coach Holmon Wiggins doesn't like to see playmakers line up in just one spot, another factor that appealed to him.

"They find you a way to get you the ball," Lambert said. "They might have you play out of the backfield or in the slot, wideout. They're gonna make sure you get the ball, so I like that."

Even though it's early yet for the rising junior, the Hokies will likely have plenty of competition for this particular "playmaker." He says he hears the most from Tech and South Carolina so far, and visited Columbia on April 21 (with plans to see the Gamecocks again this summer).

Meanwhile, Baron and Tucker are both hearing plenty from the in-state Vols — Baron went to Knoxville for a junior day in February, while Tucker swung by Tennessee's spring game April 21.

Yet all three are hoping to get back to Blacksburg to catch a regular season game in Lane this fall. Tucker even has one picked out already, so he can get a feel for what a true gameday is like in Blacksburg.

"I'll definitely get back to Blacksburg when they face Notre Dame at home for that night game," Tucker said.

Great write up. Though it makes me feel so old that we are talking about kids who will be coming to the burg 20 years after i graduated...

Umm, welcome to my world...25 years ago I could have said the same thing.

You are still in diapers, while I may be getting ready to start wearing them again. [Fifty years ago, I was just finishing my Junior year at Tech.]

All props to you. Had I stayed on "schedule", I'd have been in the class of '72. Nice to know I'm not the only seasoned wood in the rick.

"He's absolutely amazing," Tucker said. "He played at Oklahoma State with Barry Sanders so he knows a lot about the game."

I had never heard that... that's a fun fact.

As much as Woody Baron gave on the field, I don't care what is little brother is rated, get him in Orange and Maroon!

Nice write up Alex & congrats on your move to ARLNow!
Good to hear the recruits get excited about the crazy energy and how "loud" it was for the spring game... but nothing like a fall game in Lane... 19 weeks to 1st home game!

Keep the siblings coming to the maroon and orange ! Having Wiles still on board has been key for some defensive prospects . Keep the momentum going !