The Hokies add a Sunshine State running back to their 2019 recruiting class. 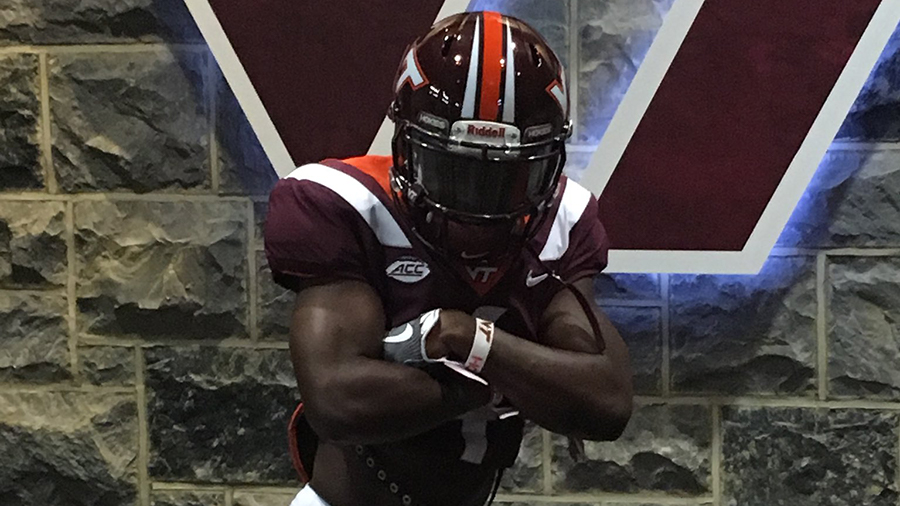 The Blacksburg Bash, Virginia Tech's marquee summer BBQ recruiting event, got off to a sizzling start Saturday. In short order, the Hokies added running back Keshawn King to their 2019 recruiting class. The 6-1, 185 pound Oakleaf HS (Orange Park, FL) product picked Tech over a potpourri of Power Five offers. The 247Sports Composite rates King as a 3-star (0.8777) RB. ESPN tabs him as a 4-star recruit, and ranks him as the 20th running back in the nation.

According to Jacksonville.com, King rushed for 1,427 yards on 201 carries during his junior campaign. He also accounted for 20 total touchdowns.

Even though the Hokies offered him in May, King's commitment, during his first unofficial visit to Virginia Tech, seemingly came out of nowhere. Unexpected news can be the best kind of news, especially on the recruiting trail.

Shortly after King's commitment I received an unsolicited note from longtime Navy blogger and Xs and Os aficionado Michael James of TheMidReport.com.

Keshawn King goes to my daughter's high school. I've probably seen more of him than any other high school player in the last two years. He is phenomenal. There are faster RBs, but very, very few who can match his vision. The perfect back for a zone scheme. He'll be a star.

There are faster RBs, but very, very few who can match his vision.

I wonder where I've seen that before...
https://www.youtube.com/watch?v=rTNoSsI7jfg

OT: But that video brought back so many memories, first game in Lane for me was 09 Marshall, the Miami game was the 31-7 smackdown in the rain with the premature (shocking) "DA U IS BACK" and Jacorry for Heisman, DANNY COALE! ALL THE WAY! TO THE 3!

Also, I think Ryan Williams had more highlights in that video than all of UVA football has had since 2009

When ever I see video of Ryan Williams I feel bad for the dude. So much talent, and then having his career derailed by injuries as soon as he gets to the league.

I mean you can throw in Kevin Jones and Lee Suggs while we're at it...

I also quickly notice his speed (long stride in open space, and definitely gets his knees up for power). This (James' comment) is good to hear from someone who had seen him on more than selected highlights.

He has wheels. When someone is that fast and the first thing scouts talk about is their vision...

Higher rated recruit than Knight, Griffin, and Houston and plays against better high school talent than Laborne, Slade, and Ford did. I am extremely happy!

This is an awesome get for us! He definitely has great vision. Anybody else notice that pitch play at 3:20? I haven't seen anything like that in a while.

Hopefully he will play at one of the high schools near me and I can catch a game.

not sure what side of town you are on but looks like most of the games are on the westside of town for them. im going to try and check them out during our bye week. kinda wish we played them now. but kinda glad we don't. they play 2 teams that played for the state championship last year. Raines won the state. honestly id like to go to the oakleaf vs trinity game. as trinity has a couple guys with hokie offers on their team. they have a VARY tough schedule this year.

Was hoping they were playing PV or Neese this year.

There may be faster RB's, but it doesn't look like there would be many that are significantly faster. At 6'-1", 185#, he's got a frame that can add some muscle. He finds open ground quickly, sticks his foot in the ground and gets upfield. Color me impressed.

I'm guessing a big plus to Fuente is how he holds the rock. Both hands on the ball through the line of scrimmage, than high and tight in the open field.

Sidenote: The more I see the new unis on actual players the more and more I like them.

This is great. He'll make a great 1-2 punch with Drew Harris.

DH better hurry up and enroll. His eligibility runs out at 30.

Running style and vision on cuts reminds me of Matt Dayes.

I'm very excited about this, but can honestly say I had no idea this was even on the radar. I'm sure our insider guys knew but for me this was excellent unexpected news.

It feels like everything's coming together. I think the next few years are going to be a lot of fun for Hokie Nation.

One of the things that stood out on film to me regarding his vision was his cutback. That part of his game reminds me a lot of Clinton Portis and the way he used to cut back when running in a zone blocking scheme.

I may not be a smart man Jenny, but it would appear that CJF may have found his player who does everything he says he wants out of an every down running back. Great pick up for the home team!

After 2 days on the lake away from sports news in general, this is a perfect way to start my Sunday! Kudos to the staff for pulling this one off, welcome HOME, Keshawn!!

This guys film is impressive. He looks like a perfect match for what Fuente wants, someone with speed, vision and the ability to make the first guy miss. If he went to HS in VA he would be a mid level 4*. Welcome Home!

You're gonna have to explain that one to me....

lesser competition means gaudier stats. As much as rating services try to account for strength of competition, crazy stats are hard to ignore.

Not hating on you... But that is the furthest thing from reality. Va kids (among others) are regularly underrated/undervalued because the fact that they don't see quality competition on a weekly basis.

Are they really? In my observation, Virginia has underperformed, not over performed with regard to player rankings in recent years.

This is admittedly anecdotal and not backed by hard evidence.

Disagree. Unless the average 3 star kids in Virginia start to produce consistently (key word), then I'll gladly take a 3 star from Florida or Georgia who fell off the radar of other top teams. Maddy, Hosley, come to mind. 90s VT teams were loaded with them. Virginia talent has gotten better, but it's still top heavy. It's key for us to get the best in state players because they are really good, and likely deserving of ranking. But a 3 star from Florida or Georgia would fit that hole too.

Actually I started looking back through VA recruiting rankings and what stuck out to me was the number of top ranked busts.

So yeah there are certainly good players from VA but the top ranked player has essentially never lived up to his potential and the top 10, despite usually consisting of all 4* recruits, hasn't consistently produced even at the collegiate level.

Leg for the analysis. I'd say 06-10 was some top talent. 6 starting QBs in the ACC were from Virginia. That only rivaled Texas, California and..... Florida. Right now, if I see a QB from VA, it's a testament to the growth of talent here.

Busts happen, I'd say with the few 4-5 star players, you need more not to be a bust, than for so many to do so.

Busts definitely happen more often than fans like to think and I'm not sure what the typical rate is for 4* and higher players but it appears that easily more than half of 4* from Virginia since 2010 have been busts.

I wouldn't single out VA for this. My guess is that this is standard across the country. Rating high school players is like throwing darts while blindfolded. So much can change after they leave high school and that doesn't even consider the completely different teams they play against and teammates they play with while in high school. Generally speaking, I think we can all agree that it is more likely a highly rated player will be more successful than a lower rated player regardless of which state they come from.

I specified that I don't know how performance of VA recruits compares nationally and was simply providing some rough data on VA recruits since 2010. This was in response to previous posts, which I would say more strongly contradict your position that it's standard across the country:

Va kids (among others) are regularly underrated/undervalued because the fact that they don't see quality competition on a weekly basis.

Unless the average 3 star kids in Virginia start to produce consistently (key word), then I'll gladly take a 3 star from Florida or Georgia who fell off the radar of other top teams. ...Virginia talent has gotten better, but it's still top heavy. It's key for us to get the best in state players because they are really good, and likely deserving of ranking. But a 3 star from Florida or Georgia would fit that hole too.

When the notification came up on my phone that he committed, I literally said out loud, "Cool - who in the fuck is Keshawn King?"

I've (we've) been focused on Gary, Knight, can we flip Griffin, Houston (until recently) etc. I follow recruiting pretty closely and I'd never heard King's name.

He could end up being the jewel of this class.

Pretty darned fast, with a great ability to accelerate out of cuts. Def has several gears, and uses them to great effect - he lets plays develop in front of him and seems to adjust accordingly, then has the wheels to beat guys. He'll have to learn early to keep a lower pad level. Seems to like contact - hopefully that translates to being a willing blocker. Can't wait to see what he looks like in a year - he has a frame that Hilgart & Co must be salivating over.

By the way, King beats a Knight.

K2 or TD King. Either will work nicely.

You had it right, it's pronounced Keh-Vin

"So Keshawn can you play DT?" —Bud Foster probably