The latest member of DBU discusses his recruitment and the opportunity to represent his home state with insights galore from his head coach. 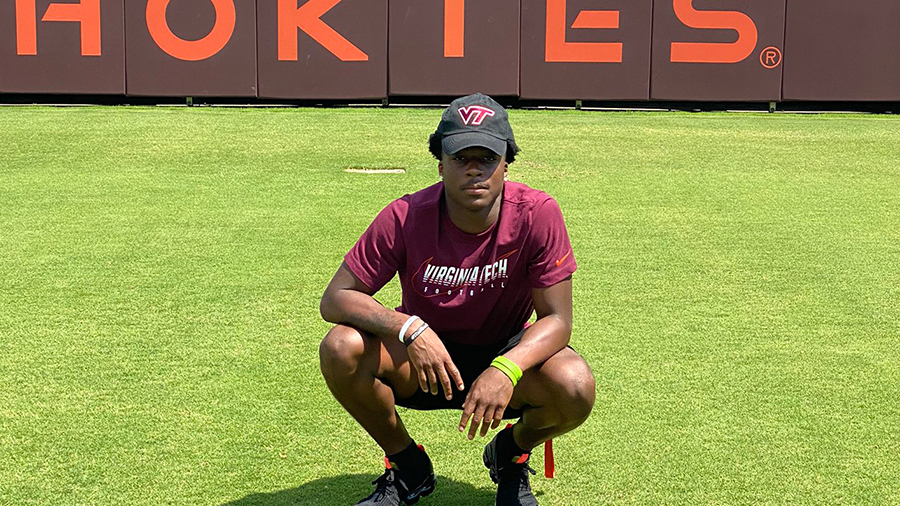 When defensive back Shawn Asbury received his offer from Virginia Tech on June 17, he knew right away the Hokies were the pick. However, the timing was not quite right to announce his intention. He waited four days, and on June 21 he opted for Tech over, most notably, an offer from Pitt. The delay? Well that was so he could announce on his mom's, Rochell's, birthday. The ultimate gift.

"She's been here for me the whole process," Asbury said. "Me growing up, she took me to practices, never missed a game, none of that. That's in both sports, basketball and football. I felt like that was a good way of paying her back for everything that she's done."

"Playing for your home state is just crazy," Asbury added. "A lot of people don't get the chance to play for their home state that they've lived in for their whole life. Me growing up in VA, watching Mike Vick, I've been to his camp when he had Tyrod Taylor there. I got an autographed ball from Tyrod Taylor, a picture with Michael Vick. Now I have the chance to go to the same school as both of them."

Ultimately, the Hokies added a versatile secondary defender to their 2021 recruiting class. The 247Sports Composite ranks the 5-10, 175 pounder as a 3-star (0.8255) corner. That doesn't tell the whole story though. His recruitment was slowed down substantially because he tore his ACL in February 2019. He missed the opportunity to camp ahead of his junior campaign, and didn't return to the field until midway through last season. However, when he did, he hit the ground running.

"He came back like gangbusters," said North Stafford head coach Neil Sullivan. "He was stronger. He was faster, in better shape. It was incredible. It speaks to his work ethic."

Even though Tech plans to initially slot him as a corner, due to his tackling prowess, range and high football IQ, Asbury mans the free safety spot in North Stafford's 4-2-5/man free scheme.

"We try to use him in a lot of different ways," said Sullivan. "We definitely want to make sure that we're able to use him in the passing game, but also in the running game. He's an outstanding tackler. We have things designed so that he's the free hitter, the guy that the offense can't block, to come up and make the tackle.

"He's an incredible cover guy as well. As a freshman he played strictly corner, and he was lights out as a freshman, but he transitioned to safety over the last two years for us."

As Sullivan summed it up, "when he's back there he just makes our whole defense a lot better", and he knew that from the get go.

"You would have never in a million years looked at our defense and been like, 'that kid's a freshman'," said Sullivan. "You would have thought he was a senior, you would have thought he was an established player. He was just so confident, smooth, polished, focused and hardworking. He just had such a whole different mentality and performance level that you don't expect from a 14-year-old. Right away, it was clear to me that he was going to be something special."

Credit Ryan Smith and Justin Hamilton for convincing Asbury to pledge to Tech.

"Coach Smith was definitely the first coach to reach out to me on the Tech staff," said Asbury. "So that was huge. Coach Smith really believed in me throughout this whole process. He's just a great guy."

And Hamilton, while at UVA Wise, coached Asbury's trainer, Nehemiah Jones. That connection played an important role in the recruiting process too.

Until Asbury works with the duo at Tech, he's focused on improving the little things in his game — pursuit angle technique, trusting his keys, eliminating extra steps in breaks. Both coach and player believe that's the most opportunity for improvement.

He took a self-directed, unofficial visit to Tech last weekend and really connected with the small town atmosphere which fits his relaxed vibe. The trip included a stop in Lane Stadium.

"That was my first time ever being on that field," said Asbury. "Me walking through there, envisioning plays that I could possibly make."

Now Asbury's attention is focused on bringing other players from the state of Virginia to Tech with him. He's teammates with 2022 4-star running back Tevin White and in the ear of 2021 4-star Unity Reed HS defensive tackle Tyleik Williams.

"I'm just trying to get the whole VA to come to VT," said Asbury. "That'd be one step, Tyliek comes. Tyliek could bring in another great athlete, and we can keep this ball moving."

Absolutely love his enthusiasm and how jazzed he is to be a hokie. Looks like a definite buy low candidate because of his injury, which has come up a few times in this class

Absolutely love his enthusiasm and how jazzed he is to be a hokie.

It's beyond refreshing. We spend so much time recruiting guys, trying to covince them and show them how great VT is, only to have a lot of them go another route. Then someone like this comes along, who's all about it. Looking forward to seeing him on the field.

Sounds like an awesome guy. Can't wait to see him in O&M.

Side note: Stonewall Jackson has just had it's name changed to Unity Reed High (aka UR High).

Yay another way I can tease my wife!!!

She went to Stonewall? Which year?

This sounds like a trap, you want me to give away my wife's age? Trap I tell you!

I honestly thought that this was a joke. Nope. They definitely went with U. R. High. Well played school board, well played.

I didn't even make the connection until a Stonewall alumnus friend of mine pointed it out. GREAT stuff school board!

Thanks for the heads up. I'm annoyed with myself because I knew it was on the table to get changed, but when I couldn't find anything final when I originally wrote the story, then forgot to recheck in the morning.

Yup. I saw it in WaPo that morning. I went to Stonewall Middle (aka Unity Braxton Middle School, I believe) and was a little disappointed to see the name changes, what with my attendance there. But these are the times and it's probably for the best. I'll probably never remember the new name given how long I've known it by the old name.

But if you were to walk around my Manassas neighborhood, you'd see that it wouldn't be unheard of that virtually all of the roads might end up getting renamed too.

I went to Baldwin Elementary waaaaaay back when the after school basketball program played the games in the Stonewall gym. Haven't thought about that in forever. Moved away before middle school, though.

The acronym for the new Stonewall High name is stupid but the man who they named it after is a bad ass. He definitely deserve the school named after him.

Shit. Asbury plays in a 4-2-5 defensive scheme. That means that Rich Rodriguez has finally influenced Virginia Tech. Maybe he is the secret coach in Blacksburg?

Well...I guess the worse thing that can happen is Rich Rodriguez is hired as special assistant to the head coach in Blacksburg.

Yeah he was a 3-3-5 stack guy, but idk RR well enough to know if he even has a defensive preference or if that is WVU's def preference (it continued after his time there). Maybe a bit of a chicken/egg question. He's mostly known for his offensive prowess/innovation, which he showed off a bit again last year with the way he utilized John Rhys Plumlee in the QB run game for Ole Miss after he became the starter.

Rich Rod was a 10 guys 6'0 185 and one nose tackle on defense guy when VT and Miami left the big east. Those WVU teams were so fucking annoying and had to go through Randy Edsall to get to a BCS game. Fucking annoying. Hated watching the 10 safety defense play. Glad that dude is in the coaching shitter.

Hmm this really seems like this comment should violate the community guidelines... I better reread them to make sure I can downvote such a vile comment.

Somehow, though, every time they made a BCS bowl game, they won. Beat Georgia in 2005, Oklahoma in the 2007, and Clemson in 2011. I literally wanted to stick a fork in my eye listening to those assholes celebrate at school about those BCS wins.

I hate WVU too but they were good, and particularly in big games. It is what it is.

Georgia was making a comeback until they gave up that fake punt. Rich Rod sucks, but the guy had balls and knew he was the underdog. I also appreciate the amount of pain he caused WVU fans by dipping out after the loss to Pitt in 2007.

My attempt at joke was an epic fail.

love this Commit...Yes please do bring your teammates and friends from NOVA with you.

Stoked for a guy who is pumped to be a Hokie! Hope he is feeling better than ever after injury!

So, getting a lot of CBs for Boston College now...

This isn't the appropriate thread.