Bryce Goodner Discusses his Commitment to the Hokies 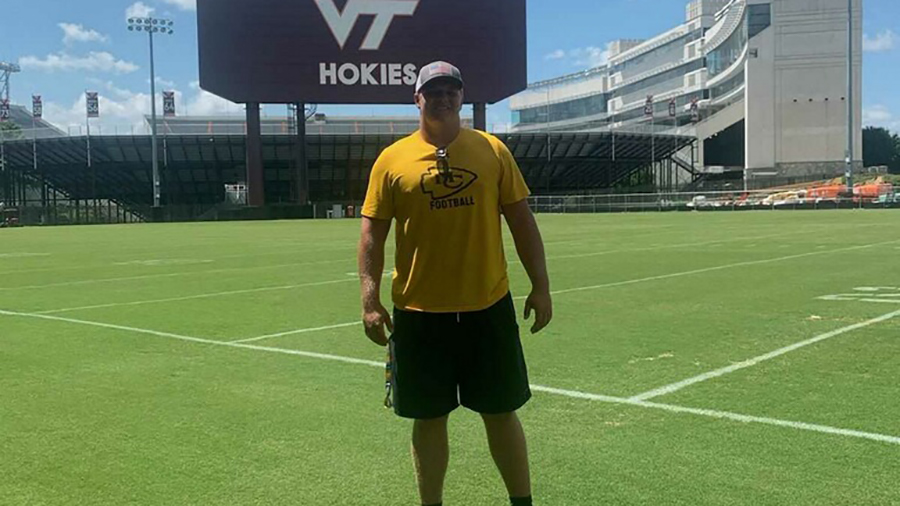 Virginia Tech added a bruiser in the trenches to its 2021 recruiting class. Bryce Goodner announced his commitment to the Hokies. Vance Vice extended the offer Sunday, and Goodner committed on the spot.

"When I was talking to Coach Vice and he offered me, I was so thankful because Virginia Tech was my top school throughout this whole recruiting process," said Goodner about the offer. "I remember I said, 'Thank you so much for believing in me and giving me this opportunity.' He said, 'Boy, I didn't give you any opportunity, you earned that.' And that really struck me, and made me happy."

He developed a strong bond with the Tech o-line coach over his recruitment.

"He's wild, but man I love him," said Goodner. "He reminds me of a lot of coaches I've had in the way that I can cut up with him and have a great time. Talk about fishing and hunting and all of that, but when it comes down to it, I respect him and I'll be able to learn from him."

According to Goodner, Justin Fuente reviewed his film Friday night and on Saturday morning he instructed Vice to offer the scholarship. He believes his power and explosiveness stand out.

"I feel like that's what's setting me apart from everybody they're recruiting," he said. "There's kids that are bigger than me, and faster than me, but there ain't many that are stronger and quicker."

The 6-3, 294 pound Goodner has currently not been evaluated by the major recruiting services. In addition to Tech, the planned electrical engineering major held official offers from Air Force, Navy, Charlotte and Rice. While he plays right tackle for McMinn HS (Athens, TN), Tech recruited him as a center or guard. Goodner realized playing center would increase his chances of playing college football, and learning to snap has been an active work in progress over the last couple of months.

"When I first started [snapping] I was slamming myself in the nuts, I won't lie," said Goodner with a chuckle. "But now I'm starting to build up that good muscle memory, and once I learn how to read the plays, I think I'm going to be really, really good at it."

His weightroom maxes are nothing to sneeze at — 350 bench, 315 power clean, 645 back squat, and 545 front squat (he's really proud of that) — but his leap out of near-44 inches of water paints a clearer picture of his strength and athleticism.

"I first did it at my friend's house playing pool basketball," said Goodner. "And we were all fired up. My friend missed a shot and [the ball] bounced out of the pool, so I just jumped out.

"The funny thing was, none of my friends said anything about it. And then I did it at my grandma's house with my whole family, and my momma saw me do it, and she said, 'Bryce what'd you just do?' I said, 'I got out of the pool.' And she said, 'You need to put that on Twitter.' And I said, 'Why?' and she said, 'Just do it.' And you know momma's always right."

While he candidly noted he hates running, he is focused on improving his conditioning to better his endurance and consistency.

"On a good play I put somebody on their back, then I'm getting somebody else," said Goodner. "And if I can have a good play every play, for a whole game, then that's going to open so many opportunities."

He and his family visited Tech last Saturday and he left enamored with Blacksburg.

"You can tell that's a true, small college town, and I can see it really coming alive on game day," said Goodner. "I've seen them clips of people jumping around in Lane Stadium, and man it just looks cool. Everyone there loves college football, and I feel like I'd like to be a part of that."

I trust this staff's ability to eval OL. I also like that we have been maintaining solid numbers of OL in terms of roster management. If they think this guy has a big future then I'll defer to their (and French's) judgement. As I've said before, outside of those 4.8 40 6-6 315 pound tackles with a six pack that have feet like a gazelle (the easy ones), I don't have a great eye for OL, particularly interior OL scouting.

Pool jump is very impressive. For a half second there I thought he was just going to climb out with his hands.

3 years from playing. I'm getting old. I hope he is the next nasty!

What a Goodner catch!

That quote about slamming himself in the nuts is one of the best recruit quotes ever.

I'd think that would lead to very quick muscle memory development

I am just happy to finally get a player whose slamming himself in the nuts days is in the PAST and not the future.

Hell yeah baby. Getting to really love this class. Excited for the other rumored commits as well.

Edit. Oh shit he's an EE major too? Starting to really like his guy

That'll change really fast once he gets on campus. Pamplin all the way.

It could happen. The only guys I knew who finished in engineering despite playing football were o-line men so there's that.

One of my friends played for Holy Cross. He said that the SAT scores of the Oline beat every other position group by 100 points and Holy Cross isn't really known for letting football players academics slide.

I'd be curious what someone who is better at looking at tape thinks, he's definitely fast and strong, but it doesn't look like they're doing a lot of complicated blocking. He seems to have one dude who he's supposed to take care of, and he seems to do a good job of putting that dude on his ass pretty regularly. How common is that in high school, and how hard is it to pick up the combination blocks that someone like Vice runs at the next level?

Yeah they run a power blocking scheme. Most plays he's blocking down either on a DL or climbing to the next level against LB and the running back is coming right off his ass. I'm curious for French's eval (perhaps a separate article for TKPC), but Tech runs power and inverted veer which follows the same blocking rules. I haven't seen the film to project how he reaches on zone blocks.

It also seems a little hard to analyze given how completely he seems to dominate all these dudes physically. Hard to judge a freight train's technique when its running over a rabbit.

Wow, 6'3 and 294 as a rising senior is huge. Hopefully he has a mean streak in him too to help out with those pancakes

Offers from two academies and Rice?

Can jump out of a filled pool?

Says VT was his top school through the entire process?

He plays with a nasty streak which would be nice to see from our linemen! Move him to center and he can be our next Jake Grove!

Begeezus Keereist.
Ever try to jump out of a pool like that? Now consider he's got the explosiveness to move 300 lb like that, consistently. And not realize that's quite a feat.
And he's smart enough for Ivy league and the Academies?

Yes, please.
Dam, I got excited about football again.

Hey, didn't mention this recruit is from Athens TN. I didn't realize I was living in a VA Tech recruiting hotspot. Athens, Tray Curry from Cleveland TN and last year Bailey from Greenback TN. Pruitt better pray these players from his backyard don't bloom into great players.

I didn't realize I was living in a VA Tech recruiting hotspot.

Do you sport VT apparel, flags, decals, license plate frame, or other merchandise? Because if so, thank you for repping and creating a hotspot! Edit your TKP signature to take full credit for those guys! 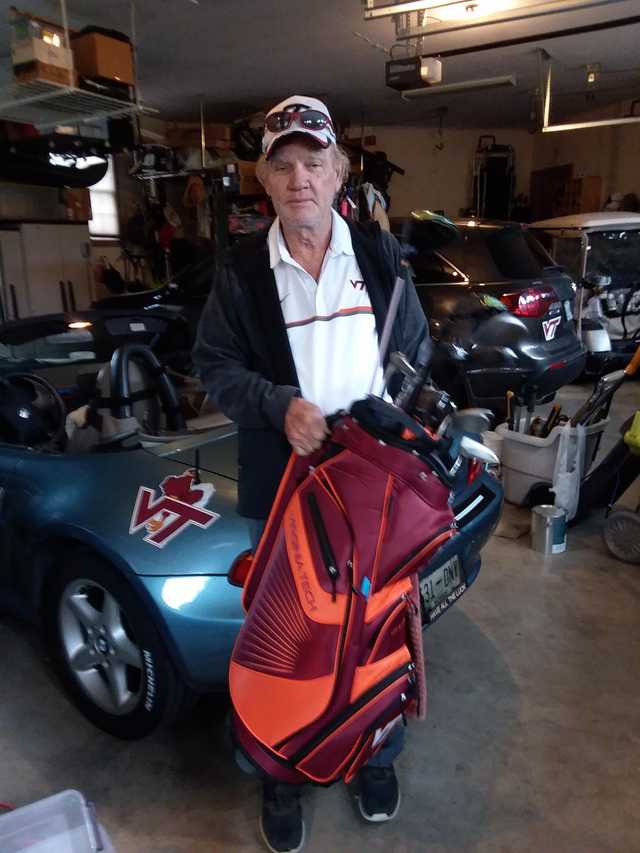 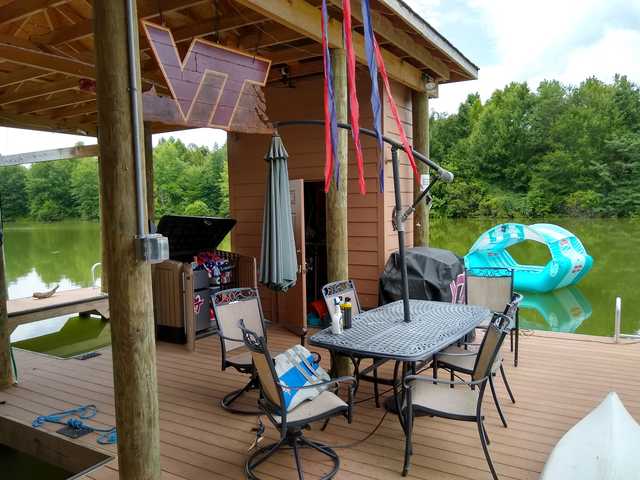 well yeah, just didn't realize the effect I was having....

Love that old wooden VT sign in the bottom pic!

get this man some Hardee's coupons stat!

Great list of offers - for on oline guy having two academies and a collection of ivy leagues speaks volumes. It'll be nice to have an EE on the line.

Love hearing that he's an old school guy. Reminds me of a mix of Jake Grove and Anthony Munoz

Also the girls in the background of that video are hilarious. So impressed. :D

We do want an electrifying offense.

Having both sides of the ball nicely alternating will certainly improve the current state of the program.

It would have the potential to induce fan donations. You know, to direct their currency into the scholarship fund.

IF AND ONLY IF we can secure that kind of funding.... That should help get recruits AND wins.

OR at least we'd be solvent. We do NOT want to be in the red with the looming revenue shortfalls.

NOR would we want to fall off on the recruiting.

It's more than just a binary choice.

I hope Hamilton's defenses can be as high-impedance as Foster's classics.

Ohm my god, people! If I have to read another bad pun I'm going to short circuit!

Take it easy, it's all in fun. No need for a Zener breakdown.

You don't like the puns?
I'll put mine in haiku form
Resistance is futile

So you have no more capacitance for any further punnage?

It would seem that Vance is fully committed to rectifying our Oline situation.

These are all very mature puns. You can tell because they are full groan.

What's with all the puns. Why can't y'all just conduct yourselves normally

Ohm.......we're just trying to get amped up for a recruit and sometimes it is good to laugh/groan so hard it hertz.

This really resonates with me. Standing waves for all!

Vice better have them ready. Bronco has a history of players hitting the family Joules.

Feels like he has awfully low permittivity, for free space.

By the time he's done at Tech, we'll be calling him, "Bryce Greatner". Amirite?