Hokie Tracks Dropped Way Too Much Money on New Couches 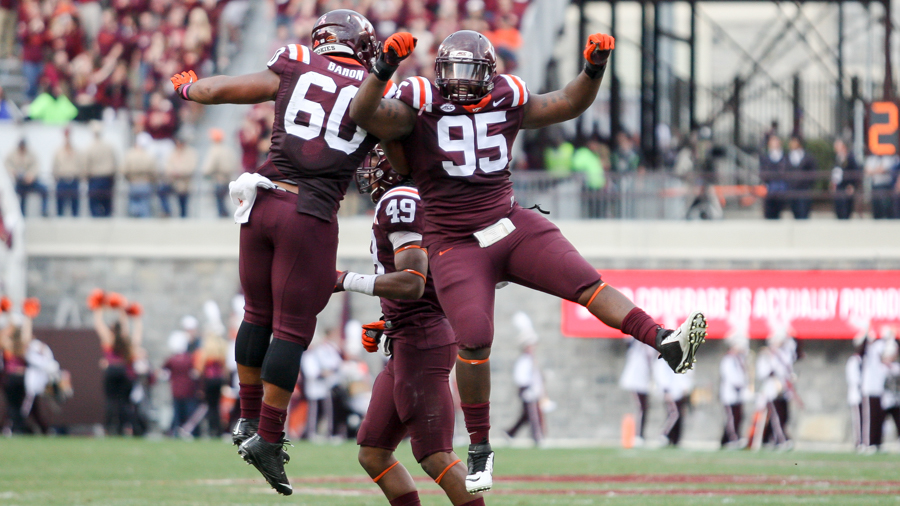 Nigel Williams (95) and Woody Baron (60) celebrate a big third down stop in the second quarter against Duke. [Mark Umansky]

Virginia Tech will play football in 95 days. The countdown to the Hokies' 2016 season ticked under the triple-digit mark without even the slightest peep from this inattentive author. Normally round these parts that milestone is met with a brief fanfare, but unlike Danny Coale, I dropped the ball.

Even though Tech football sits on the back burner throughout the summer, a few things worth discussing boiled up over the last few weeks.

Expect a habit of catching the ball against his body rather than extending his hands for catches to be one scouting knock, but Ford's explosiveness is elite.

For my money, Ford's a cut below the prototypical first round wideout. I'd be shocked if he could post the NFL's highly coveted 4.4, 40 speed. Although, that's not a hard prerequisite to being drafted in the first round. Production isn't the issue though, Ford led the ACC with 1,164 receiving yards and 11 touchdown catches. To the detriment of defenders, he moves silky smooth on the field, and it's not completely inconceivable an NFL GM values Ford's (let's suppose improved) tape over a track sprint. Regardless, I do think Virginia Tech will be hard pressed to retain Ford for his senior season.

Man I love Frank for being able to take this and still stand. @coryholt12 #Classic @VT_Football pic.twitter.com/voLkZGKZNy— Justin Harper (@Justin_Harpo) May 25, 2016

If there's anyone who can empathize over-celebrating a field goal, it's Beamer.

POUND THE ROCK OVER. The Vegas sports book South Point released early win totals for all 128 I-A college football teams. Tech's win total is set at 6.5. As of writing this, I have the Hokies pegged at 7-or-more regular season wins. Pencil in Liberty, Boston College, East Carolina (this is dumb) and Syracuse as wins. Contrarily, give me Tennessee and Notre Dame as losses. The Hokies then need to split half of their slate among North Carolina, Miami, Pittsburgh, Duke, Georgia Tech and Virginia to reach seven wins. Oddly enough, three-of-six seems doable.

"Next summer, we're working with four vendors now, we'll take those seats out and replace them with a much more comfortable, bigger seat," Gabbard said. "Those rows now have 20 seats in them, they'll go to 18, but it'll be a 21-inch seat, it'll be a high-backed seat with a cup holder, padded, and it'll be a premium seat, and if that goes well, we may take that theme and take it all the way around."

Whit Babcock provided a preview of what's to come.

A year away from some new more comfortable seats in Cassell. Prototypes here. Likely dark maroon when installed pic.twitter.com/CXC7zK0LLr— Whit Babcock (@WhitBabcock) May 25, 2016

@devonhunter11 I see va tech in your future .. Congrats on everything. You just touching the surface. Take off. Represent the 757— The Enforcer (@Kam_Chancellor) February 26, 2016

Great feeling to know that your favorite player is on your side https://t.co/sBeDokn4G7— Devon Hunter (@devonhunter11) February 26, 2016

Good article, I just thought maybe you would have penciled Uva in as a win.

Why would I do that?

As you can see, the UVA jokes write themselves.

Man why do people say this? We haven't comfortably beaten UVA since 2011.

Well, the last time UVA won this game, their seniors were still in elementary school. Before that you have to go back to 1998. 12 in a row (and 16 of the last 17) seems like a pretty good bet. Yeah, the wins haven't all been pretty.

But they've all been wins.

The games over the last few seasons have been too close for comfort, but in any event, each game in a new season is independent of the result from the previous year. Past history is a minimal predictor of future results in my estimation. Additionally, I would never consider a game against Virginia — a rivalry game — a lock. I think Tech has more overall playmakers, but the edge in talent the Hokies had over the Hoos has narrowed almost even. Bronco Mendenhall has had a handful of double-digit winning seasons and is a definite upgrade at head coach for the Hoos.

I guess upgrade depends on your perspective. I thought Timecop was the best coach UVA has ever had!

"Past performance is not indicative of future results."

True in investing, true in football.

Incidentally, also an oft repeated phrase when recruiting the next crop of LOLUVa football players.

No, but how have we done against ECU in the last few years? That was listed as a win.

I would say we have a decent advantage over Uva this year.

So dark Maroon seats all around Cassell... you know, because the place wasn't dark enough as it was...

Won't matter if butts are in the seats

Better than a potential blindingly huge field of Orange on TV. This is a sample from one of the first vendors. Still have one more to come through, so I'd imagine they have a vendor and seat picked out by the end of summer.

It needs some cup holders.

Why? We don't currently serve any beverages worthy of cup holders.

They are on the back of the seat. Guess I should have taken that angle too.

Hmmm, I am not sure about this, if I was a betting man I would take the under. Given our recent track record, coaching change and relatively tough schedule this year 6 wins seems reasonable (Liberty, LOLuva, Oranges, ECU, GiT and Pitt would be my guesses). Of course I would love for Fuente to prove me wrong...

You are guessing we will lose to LOLUVA this year???????

Looks like he has them included in the 6 wins...

Great about the Hunter/Chancellor meeting. That would really
give us a boost to land him. but unlike Danny Coale, I dropped the ball.

Awesome. I now have a new excuse for every time I screw up. I'm not Danny Coale either.

Enjoyed finally to get to meet Big bro

I think he forgot to inform his face of this.

People talking like we aren't going to win every game???

Glad to hear I'll be able to fit in a Cassell seat this year.

I'm really split on win totals. On the negative side, we are instituting a new offense with a new QB. And there are a lot of swing games, not hard to see us losing the UNC/Pitt/Duke/Miami+ games, those programs are a step ahead of us right now (sigh). On the positive side, we will have an actual offense with our usual salty defense, that sounds like 9+ wins to me. I could see us winning 10 games this year.

We need to protect our homefield. So important and we've totally gotten away from that.

Am I the only one that is disappointed that we didn't get any info about the new couches?

I was also confused by the title but passed if off as Memorial Weekend Drinking shenanigans...

I just purchased a new couch yesterday if that helps? Nothing special, but it seemed pertinent to mention

Yesterday I took a short nap on a couch that seemed too expensive when purchased 15 years ago.

Longer and more frequent naps would have you get more for your money.

I just purchased a new couch yesterday if that helps? Nothing special, but it seemed pertinent random to mention

Unfortunately, I think the sofa and love seat together is too big for the space, so that's going to be fun to remedy.

"I DROPPED WAY TOO MUCH MONEY ON NEW COUCHES"

"What is 'a phrase uttered by every WVU fan, ever,' Alex?"

We got a new couch and chairs for the living room and awesome recliners for the family room close to the fireplace. On cold Saturday's away from Lane it is perfect watching/snoozing with my wife. Life is good.

I predict that Fuente will carry out the Beamer revenge tour this year. Hokies will knock off ECU, Duke, UNC, Miami, and Pitt. UVa- Duh, and Liberty. They'll beat UT and ND, but lose inexplicably to GT, Syracuse and BC.

9-3. They'll sneak into the ACCCG. I ain't calling that yet, cause it's way too early to predict.

I'm all for an old-fashioned revenge tour!

I see 3-2 and OCC, losing to ECU only if we beat UT. I see 2-2 against the top of the coastal, with additional loss to a 6-6 team to finish 7-5, and out of the ACCCG despite having beat the coastal champ.

I see wins vs. UVA, Liberty, ECU, GT, Duke, Pitt/Syracuse (one of these), and Miami/UNC (one of these) for 7 wins and a Belk Bowl appearance at a minimum. We'll be in every game, so with a little luck we could get 8 wins. This scrappy bunch will make some noise in the Coastal.

No idea where to post this, so I chose this thread. Just met Ken Ekanem and Auge Conte at a wedding reception on campus. Couple of the nicest, down to earth guys you could talk to. Ekanem was especially open to having a conversation.

We're going to be the first team in the College Football Playoff Era to go 15-0. Book it.

Add that to the 2014 national championship, for being the only team to defeat Ohio State, and we're looking at a potential 3 peat next year!