Frank Beamer should be on the sideline for every future Virginia Tech football game. 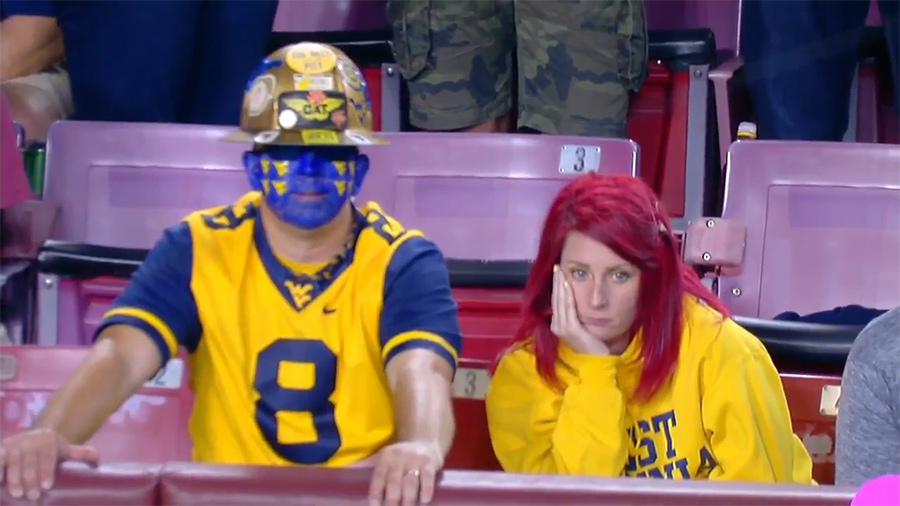 After a 12-year series hiatus, the Hokies fended off the rival Mountaineers 31-24, and maintained possession of the Black Diamond Trophy until at least 2021. That calls for GIFTORY.

Stunting for that sack.

This is some damn explosive d-line play from Tim Settle. He bench pressed the right guard back in his tracks off the line of scrimmage and sent the running back, back a yard. That's one dude blowing a play the eff up and knocking two 'Eers backwards.

Put that IV in an IV. Also, Nijman, relocated a defender to the other side of the field.

Put him 3 yards down the field on his butt.

"High knees!" — Every HS football coach ever during calisthenics and stretching.

Sean Savoy knows it's six before the ball's in the air.

"Everybody's got a price, for the Million Dollar Man."

Beamer looks like a first grader waiting for the bus on the day he is bringing the Black Diamond Trophy in for show and tell.

My favorite part of the "thump" gif was the WVU sideline celebrating a sure catch for big yards... Only to realize Adonis relocated the ball and the receiver's internal organs

ranks right up there with the LOLUVa chick on that stipped TD pass. Wasn't that Adonis, too?

I do believe you are correct, sir.

What is even funnier is the two guys who signal that it was a catch almost in unison - while the ball is careening away.

Met the guy in the opening pic at my tailgate. Super nice guy, and that's his friend's hardhat...his friend who recently died. He wears the hardhat to honor and remember him.

Was that friend in the Docker's Union in NJ? My friend died just a little over a month ago from a heat stroke that went to WVU.

No idea, he didn't go into much detail.

TT era MacBook not handling the gifs. I'll have to wait to savor the majesty.

UPDATE: all gifs are go. the jifs are goo.

That wasn't Pete Morris with Beamer was it? Almost got the googly-eyes.

TIm Settle is a bad man. How many people can tackle the RB with the RG like that?

Vince Wilfork can do that to QBs but that was Mark Sanchez so take it with a grain of salt.

butt take that with a grain of salt

Most impressive GIF? Savoy celebrating the TD like a vet the second the corner bit for Cam to get open before JJ even threw

It only could have been better if there was a camera angle that caught Savoy and the 'eer free safety in the same frame. They both knew the result the second Josh made the read.

I wish I could find a similar gif from last year, I believe it was Isaiah celebrating a Phillips catch the minute it was thrown. Can any TKP'ers help a brother out?

I've seen Jerod walk off the field with his hands in the air for a TD last year on a run play. I believe the pile was still moving from like the 5, but he was like "Nah, its in from there"

Love the DBs reaction. Missed it in real time, but watched the game again and was very pleased.

Savoy didn't even have to look down field; knew #6 was supposed to be on #5 and one thing was not like the other.

What do you think Frank told Tyrod in that Nebraska clip after throwing the go ahead TD pass?

Throw it away if it's not there. Do NOT throw a 2 point interception the other way.

Nice pump fake by J.J. to draw the coverage off Cam.

When a teacher tells you "No running in the hallway!"

it me leaving FedEx!

and the lunch bell rings.

A friend shared this one with me:

Talking shit to your mom, but then she turns around

This does not have nearly enough legs atm.

Definitely has a "Don't you walk away from me!" vibe to it.

I'd also love to see one of the WV player that apparently cramped up late... dropped in the middle of the field and writhed around for a bit. My kids thought it was hilarious.

Oh, I was thinking the ref was the mother. Dana is hurling insults at the ref and the moment the ref looks at him, Dana shuts up and turns around.

Actually I was thinking the ref was the mother. If the clip were a little bit extended, Dana opens up a gap and the ref picks up the pace to catch up to him.

Ah fair enough. I didn't see the full clip since I didn't watch the game on TV.

golf clap all around

Lol on the JJ draw play, after Yosh flattens his man Wyatt's just looking around desperately for somebody to block to no avail.

big tim settle with the quote of the year so far on tech talk like (I know I know its only week one) getting the first sack of his career... "was like getting a Gatorade after practice" good interview had me Rolling on the floor laughing. cant wait to hear more from him at the podium as the season goes on.

also devine looked so excited to be up there. great day to be a hokie! excited for this weekend. didn't really know where else to put this and didn't want to start a new thread.

Some one should start a rolling "greatest quote " thread