Ricky Walker to Return to Virginia Tech for his Senior Season 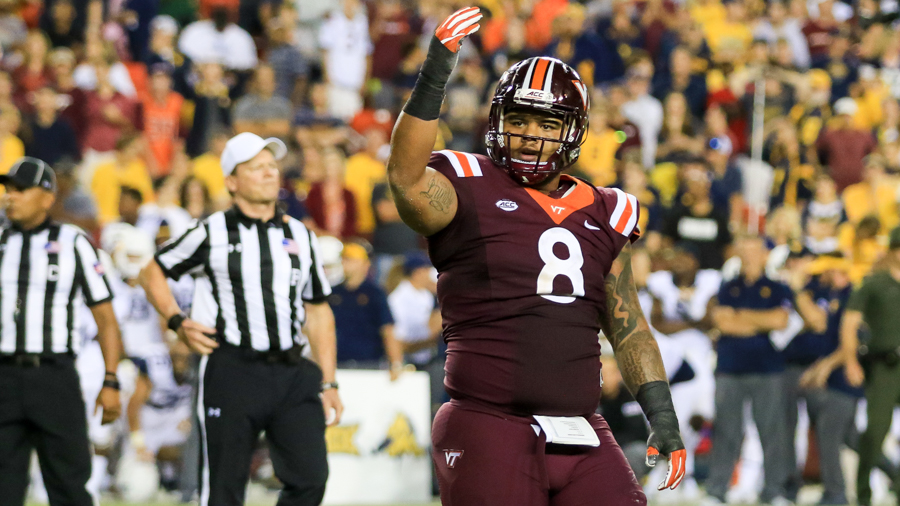 While one-half of the 4-8 defense opted for the NFL this week, defensive tackle Ricky Walker announced he'll return for his senior season at Virginia Tech.

Virginia Tech is my home and I'm not leaving just not yet! The NFL is not going anywhere . Hokie Nation we have unfinished business to handle ! I will return for my senior year and graduate in the spring ! All glory to God for my blessings 🙏🏽-Slick Rick 8 🎱- pic.twitter.com/yt7Tb4SnWr— Slick ! 🎱 (@RickGoGetEmWalk) January 5, 2018

Walker started all 13 games for the Hokies at defensive tackle in 2017, and did yeoman's work in the trenches. He also made 3 starts in 2016. He recorded 4.5 sacks (third-best among Hokies' defenders) and 12.5 tackles for loss (T-No. 3 on the team) last season. He also scored a touchdown.

We needed this. Hope he has a great year and ups his draft stock, also best of luck to Tim Settle, I hope he shows out big time and gets drafted early.

We needed this. Hope he has a great year and ups his draft stock, also best of luck to Tim Settle, I hope he has a dramatic change of heart and decides to stay after all, but if not, then I suppose a distant second is that he shows out big time and gets drafted early.

Yippee!!! We needed that. It is also most likely to help his draft stock as well.

I've never seen the 8-Ball before. Love it.

Should be a faster D-line next year. My prediction is Gaines-Walker-Mihota-Hill as the starters. Settle will be greatly missed, but I'm glad to see Walker coming back!

Probably a good prediction with Debose, Garbutt, and Proctor pushing Haines for PT.

Belmar and Minor looked like they improved at DE last year and Debose should be the next guy up after them. We have really good talent/depth at DE we just need them to get experience. I hope we can get 2 guys ready to go behind Walker, Mihota, and Hewitt.

Helllllll yesssssss!!!!!!! Stro and Walker have been my favorite players the last couple of years! Stro you'll be missed !

Well thank goodness for that. Losing Walker would have really hurt this defense next year, as he seemed to have the best motor on the line. Having him back should keep some stability while we break in the new recruits. Division title hopes are still alive in Blacksburg.

Quick, someone make another thread

YES! This is critical to anchor the D-Line, and hopefully both Walker and Settle get drafted high to lure some better DT talent to the Burg for the 2019 class.

Awesome news! He was very good this year and bet he'll be even better next year. Like he said, NFL isn't going anywhere and he'll likely be a top DL prospect.

"NFL is not going anywhere" love that quote. Glad to see he is staying!

This is huge, now I need to know who will be wearing the #4 beside him. I'm all for as many single digits as possible on the big guys. But on a serious note, losing him and Tim would've been devastating. Rick needs to use his senior season to pass on his fantastic motor and work ethic to all the underclassmen and keep the LPD going for years to come

Leg for the screen name. Big Tim and Rick used the #first48 back during the season. It's great.

He is my favorite Hokie over the last couple of years. Nobody gets more out of their talent on this team than Ricky Walker. I hope he goes ham in 2018.

Ricky coming back is GREAT NEWS!!!

We needed some good news, hopefully more to follow!!!

Phew! Now let's just hope whoever the DT next to him is can handle his own so Walker doesn't get double-teamed the entire year. Losing Walker and Settle both would have been scary.

This DT became the most popular Hokie player! How he did it will shock you! OCs HATE him!

So happy that he's coming back.

NEEDED it. So bad. Great news

Now that Walker is coming back, I hope the uniform staff invents the future and creates a jersey for Walker that opposing offensive linemen can't hold.

Need to create fabric made of porcupine quills, lionfish spines, and Tasers. On it.

You. You are a thinking man.

Not surprised he's staying and pleased it is so. His Dad told me back in October he doubted very much that he would go early. A high premium was put on getting as much education as possible from his Dad

Thanks to his Dad. Teaching him to have the long term visit. I'm not bashing Tim, but I wish he was more patient in his NFL dreams. Thank you Mr Walker.

This is truly good news! I'm looking for him to the leader to all the newbies coming in, hold the standard high. (WHich he has been doing!)

Wow, this is especially surprising as I thought he was a senior...whoops! Looks like out DT depth won't be absolute trashcan tier! Although, I have faith in Wiles to get these youngins in shape.

If I was Tim Settle and absolutely sick of classes and exams etc I would probably do what he did but I am so very thankful Ricky Walker decided to stay. Just hoping he doesn't have to face double teams his entire senior season.

Good overview of DT position from 247

I believe this is a solid response to the "Senior season Injury" concern and what I enjoy hearing.

I feel like we have accepted the line of thought that they should protect themselves from injury and go pro while they can for some time now. It made sense with Vick, as he was a #1 draft pick. However, concern about injury and getting that money when you are middle to late draft pick is nuts to me. I mean I get it, but having a degree will help you get that money too in the long run. Look at all these guys who bounced early and how that NFL career worked out for them.

I was just discussing this over the weekend with a few people. Unless you are a lock to be a 1st or early 2nd round draft pick, you should never leave early. Period. The guaranteed money starts disappearing after that, and organizations have little in the way of a financial tie to late round picks. Yeah, that six-figure salary for even a mid to late round pick sounds great, but factor in a few things: you have little to no guaranteed money, you have to give a substantial chunk off the top to your agent, then factor in cost of living and housing in a major metropolitan area. Suddenly that big pay day doesn't look quite as good. Then what happens if, after a few weeks, the team decides you aren't in their plans and they trade you away. Or what if you get injured? Average career in the NFL is only about 3 years.

Stay and get your degree if you aren't a lock to go early. Football doesn't last forever, and just making it to the league does not set you up for life.

Mostly agree. Everyone has to make their own decision though.

And just to play devil's advocate...you do not have to have a college degree to be successful. College degrees are largely over valued by modern society. Strong values, work ethic, drive, honesty, integrity can go a long way with or without a degree. College education is critical for certain specialized fields, to gain the specialized knowledge necessary to enter that industry. But for some people, experience is much more important than a degree.

A college degree reflects a certain level of education, and shows an ability to set and attain a goal. It's also a place to broaden your exposure to new ideas.

There are other ways to do this, but it's a worthwhile credential.

This is outstanding news, and helps to mitigate some of the pain from losing Tim Settle.

People always talk more about the negative things than the positive. Just look at some old live game threads. Blowout wins often have less than 500 posts while bad losses can top the 1000 mark.