Four Down Friday: Tech Takes on the Tribe 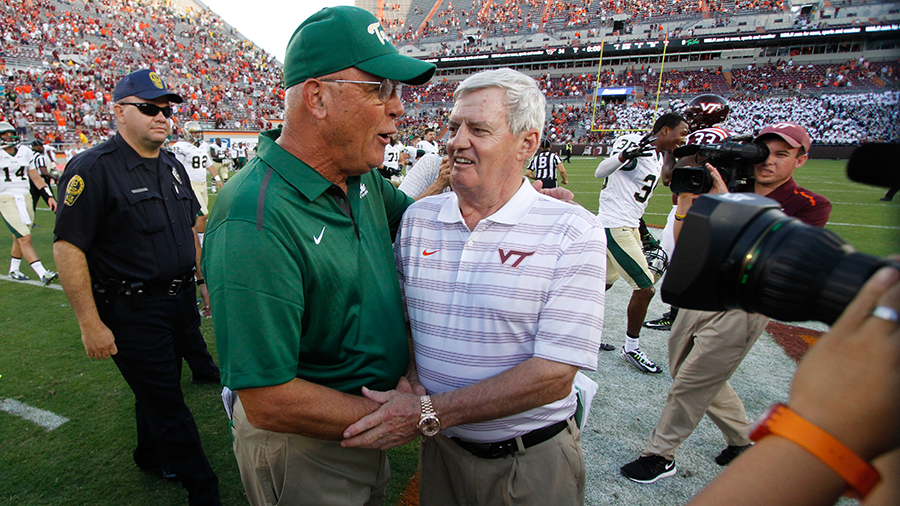 Virginia Tech, following their convincing 24-3 victory against Florida State, rose to No. 12 in the AP poll. It's the Hokies' highest ranking since last season (prior to Clemson). Before that matchup, you'd have to go all the way back to 2011 to find a Hokies team with a higher number next to their name. In week 2 of that season, No. 11 Virginia Tech took on East Carolina and squeaked out a 17-10 win. In this year's week 2, the Hokies will look to win by more than just seven points.

Their opponent, William & Mary, hail from the FCS. The Hokies have won 11 straight games against the Tribe, which went 2-9 last season. Justin Fuente was a couple months old the last time the Hokies lost to this program. And the combined score between these two teams this century is 78-12. They've played twice.

This is a Saturday afternoon game against an FCS team following a Monday night primetime game away from Lane Stadium. Oh, and it's supposed to be raining.

Fuente is well aware of how much prepping during a short week goes against the norm. When talking to media on Wednesday afternoon, he mentioned the team hadn't even met since returning from Tallahassee. While Fuente was at TCU as an assistant under Gary Patterson, the team practiced with pads for a few years during short weeks. But that didn't produce positive results, and Patterson nixed it. Fuente has taken that approach as well.

"After a couple years, [Patterson] switched it up to the model we're using now, where we take the pads off," said Fuente. "It makes you a little nervous as a coach, but we've had pretty good success with that model trying to again focus on two things: getting our guys feeling well and knowing what to do in a short week."

It appears they're sticking to the script.

It's been talked about probably 29 times by now, but it's required to reflect one more time on how impressive Bud Foster's side of the ball was on Monday night.

The 21 point shellacking was the second-biggest margin of victory for any ACC team playing its first game of the year against a ranked opponent. The only time there has been a bigger margin of victory using those qualifiers was in 1993. A 22-point win by North Carolina against No. 18 USC.

Ready for a hot take? Get some oven mitts out.

The next three games for the Hokies are William & Mary, East Carolina, and Old Dominion. With how bad the Pirates and Monarchs looked in the first week of the season (ECU lost to FCS NC A&T, ODU got blown out by Liberty), I wouldn't put it out of the realm of possibility that the Lunch Pail Defense doesn't give up a touchdown through Week 4.

If I tried to make that statement a couple months ago, I would've gotten laughed out of the room. There were entirely too many questions marks surrounding the returning players, or lack thereof, on the Hokies' defense.

Foster and his squad did a lot to answer those questions. 14 tackles for loss while allowing just 12 first downs. -11 total yards in the third quarter. 55% of all snaps going for zero or negative yards. Held Florida State to the lowest amount of points scored by an FBS team in Week 1.

Third Down: What To Watch For

Look for a very conservative offensive playbook for the Hokies on Saturday. It's pretty well known that Fuente is tight-lipped on schemes and strategy. There's not even a televised spring game anymore, and media had access to about 20 minutes total of practice during fall camp. Why would he show off the full complement of plays against an FCS squad? And as the Hokies demonstrated last year in their 27-0 win over Delaware, it doesn't really matter. Tech will get the points they need to win comfortably.

Non-starters are poised to gain experience. Yes, it's an FCS calibur opponent, but any type of game repetitions can be vital for young players. And as it's been said a million times, the youth on this defensive side could be a pitfall. Any type of opportunity to be out on the field lined up against another team will help that group evolve their skill sets. French touched on this in his in-depth defensive film review of the Florida State game.

To wrap up this down, here are some interesting notes that jumped off the page for me.

I would be shocked if all of those haven't improved when the clock hits zeroes tomorrow.

Fourth Down: The William & Mary FAQ

Who is our opponent and what should you expect to see Saturday? Consider this a less fun version of "Foe"Rensics. With, you know, information actually dealing with the game.

What have they done so far this year?

It's week 2, so not much. The Tribe beat Bucknell last Saturday by the very high score of 14-7.

"Last week they held the ball for 37 minutes. Held Bucknell to 11 first downs," noted Fuente. "It was a low scoring game, but it seemed like the held the ball the whole game."

As we all know, time possession wins games.

What should the maroon and orange faithful expect?

"They're sound in their assignments and their techniques," said Fuente. "They know what they're doing and they know their adjustments. You can tell they're a well coached, disciplined, football team. That can cause you problems if you don't execute yourself. It's going to make a really good challenge for us. Those guys will be excited to play, as will we."

More correct answer that I cherry picked from one of Fuente's pregame speeches last year.

"Not my fault they signed up."

I think it's fair to say that the Hokie Nation should expect a very comfortable win. There's a reason Tech pays teams like this to come play in Lane.

Fuente said they're well coached, who's their coach?

Laycock is coaching his 39th, and final, season this year. He's been with William & Mary for all 39 of those. He's an alum of the school and is the Tribe's version of Frank Beamer. David Teel penned an absolutle gem of a column following Laycock's reitrement announcement. Make sure to read it.

Laycock boasts a 246-188-2 record as head man, including eight head-to-head matchups with the Hokies. He's lost all of them, and many of them were not even close. The smallest margin of defeat was in 1984, with the final score of 38-14.

Who's their best playmaker?

I would say either QB Shon Mitchell or WR DeVonte Dedmon. Mitchell, a 6-0, 180 pound dual-threat quarterback, was offered by Virginia Tech early on in the process. However, he did not mature into a Power Five quarterback. Dedmon is considered the Tribe's best offensive weapon. The 5'9", 198 pound wideout broke his wrist in the season opener last season at Virginia, so he's had an entire season to get healthy and ready to go. Dedmon casually had 3 catches for 125 yards against Bucknell.

If the Hokies want to keep that touchdown shutout alive, they'll need to key in on both Mitchell and Dedmon. It'll be a good test for the young corners.

Do the Tribe have a chance at pulling the upset?

Do they have a chance? Sure, it's still Friday. But once that ball gets kicked off tomorrow afternoon, I think it goes out the door.

I really hope that doesn't end up on @OldTakesExposed.

Really liking the 4 down Friday Henry. Keep up the good work!

Mostly looking forward to getting to see the backups on Saturday. I'd like to see the 1's put on a few successful drives and defensive stands, then let's see what these young guys and backup QB's can do.

One of these days, a coach is going to say, "They're a good team, they have a lot of talent, but they're not very well coached." I hope I live long enough to hear it.

Could have said it last week...

He won't say it but I'm pretty sure this is exactly what he thinks of UNC.

If Fedora is somehow still employed at UNC in 2021, Fuente may lose enough patience to say it.

Then we'll beat them down, shut 'em out, and watch their buses break as they try to limp home.

I'm very interested to see what Fuente decides to do with the QBs once JJ establishes a lead. Good read, thanks Skutt.

DID SOMEBODY SAY QUINCY?!!?!

Not going to happen. He didn't even travel to FSU.

He gets 4 freebies without blowing the redshirt, why not play him in the games where he figures to rack up the most time?

Maybe they should save some of his 4 incase they need him later in the year.

What does not traveling to FSU tell us about their plans for QP?

And give the game reps to give real game experience to the QB's who will fill in for JJ, if he's injured.

Maybe we should use Willis or Hooker in time of need instead.

And the fact that he didn't travel to FSU tells me they weren't going to put him in vs. FSU, and doesn't really say much about their plans for the upcoming FCS game. Fuente knows he has 4 games, so I feel that he's likely to use those 4 games to get as much game-speed film as possible.

Nice job, Skutt. Really like this - informative and succinct. What stood out to me was that we're 18-0 under Fuente when leading at halftime. That's an impressive stat; I had no idea.

I just really want to see a vanilla, yet in-control game plan tomorrow with NO injuries. Get some young guys playing time, control the game, don't make anything terribly exciting, and you'll have a happy Ernest.

Consider this a less fun version of "Foe"Rensics. With, you know, information actually dealing with the game.

This is an absurd remark and should not be tolerated. FifthFuller provides invaluable insight into our opponent week in and week out. Such disparagement borders on sacrilege.

Forreal though, love this write up.

When we went down to Durham two years ago, I told a few Dookies around me that I had done some research prior to the game ("Foe"Rensics) and learned about the origins of their school and football team. They looked at me like I was crazy. You would think alums would know a little bit more about their own school...

I was also at Dook for that game. Tell me, where did you find the Dook fans? I couldn't see any.

I was there too. Wallace Wade was EASILY 40% Maroon&Orange if not half

40%? Lowball estimate for sure. I seriously can't remember the last time we played in that stadium where we didn't have at least a 60-40 advantage.

I hate to give Dook any credit, but I've been going down there for games for years and they've steadily increased their football fan base. Don't get me wrong, it's still Lane South / Lane RDC / Triangle Lane, but I was impressed. Their expansion has really helped coupled with Cutcliffe putting some nice teams together.

FifthFuller provides invaluable insight into our opponent week in and week out.

He's also the only one on the staff with realistic expectations for the season.

"Not my fault they signed up."

lol, I about fell out of my chair...good thing I'm working from home today.
Excellent write up, great format. I look forward to reading more of these.

What is the Fios channel in the DC Metro area for this game? or is it online only?

Mitchell, a 6-0, 180 pound dual-threat quarterback, was offered by Virginia Tech early on in the process. However, he did not mature into a Power Five quarterback.

I hear FSU has some openings for transfer students with offers from VT.

They would probably just fake being interested in a transfer.

A WR with the last name Dedmon probably shouldn't go over the middle much.