Virginia Tech at Boston College Film Preview: A Year of Transition at Addazio U

Analyzing the Eagles on both sides of the ball and how the Hokies match up. 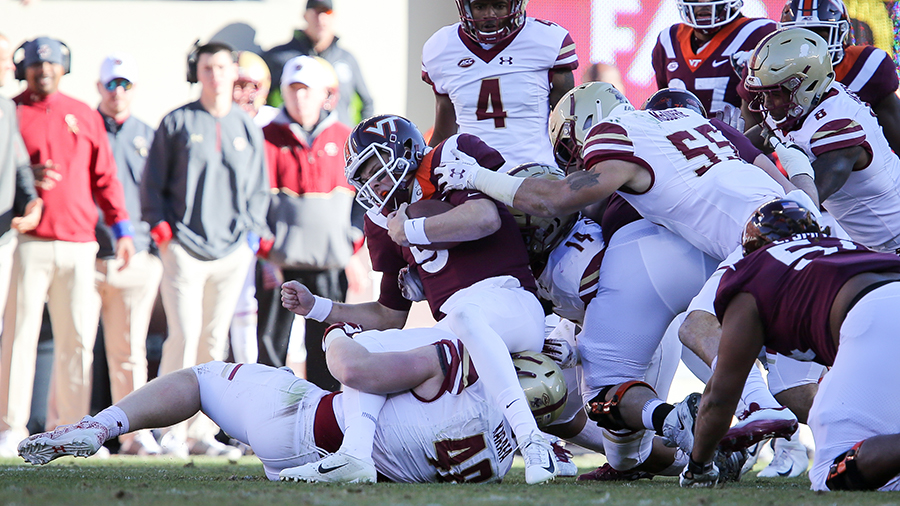 An Odd Philosophical Mix on Offense

Steve Addazio adheres to the philosophy of smashmouth football perhaps more ardently than any head coach of an East Coast program. Over the years, as the Hokies' defense has become smaller and faster to deal with the prevalent spread systems in the ACC, the Eagles have been more difficult to stymie. Bajakian was brought in to add more of a vertical threat to compliment the Eagles' grinding run attack.

Bajakin takes over an offense which deployed a multitude of formations and multi-tight end sets designed to confuse the defense. Boston College opened last season's game against Virginia Tech with a significant number of outside zones and tempo. Multi-talented running back AJ Dillon (No. 2, JR, 6-0, 250) is key to the game plan. Dillon is Addazio's ideal cannonball running back. He bounced off defenders to the inside and rushed for 1,108 yards on 227 carries (4.88 YPC) and 10 touchdowns. Dillon also has surprising quickness and was able to get to the edge when the Eagles used a variety of pin and pull outside zones early against the Hokies last season. Dillon ground Tech's small, inexperienced front down, and backup Travis Levy (No. 23, JR, 5-11, 205) slashed through the aftermath. A worn down and tired group in the box fit their gaps poorly and Levy took advantage of the gaping holes. Levy ripped off three 15-plus-yard gains in the second half.

Bajakian, formerly a quarterbacks coach with the Buccaneers, had previously ran an up-tempo, no huddle spread scheme from the shotgun as a collegiate coordinator. During his NFL stint he learned how to incorporate tight ends into the scheme better.