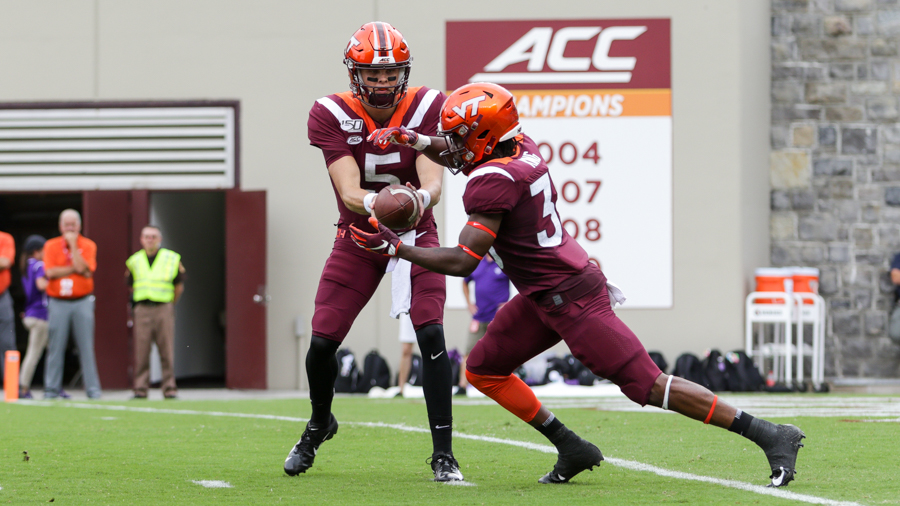 Keshawn King busted out and averaged 9.9 yards per carry on 12 attempts.

Against Furman, a quality FCS opponent, Virginia Tech looked to re-establish physical control of the line of scrimmage, play clean fundamental football, and develop more experienced depth. First half turnovers, a poor job of pass protection and blockers getting to the second-level, combined with an efficient Furman offense left Hokies scratching their heads as the Paladins broke out to a 14-3 halftime lead. Fans streamed to the exits, and social media vitriol reached a zenith.

In the second half, some personnel changes, a forced fumble by the duo of Chamarri Conner and Dax Hollifield, and a handful of electric runs by freshman Keshawn King flipped the scoreboard to 17-14. The Paladins made every effort to shorten the game, but Tre Turner turned a critical third down jet sweep into a touchdown and provided Tech breathing room. After a worn out defense finally broke down to make things close, the Hokies survived a beautifully executed onside kick undone by a new rule to win 24-17. Nobody left Lane Stadium happy, but amid the muck several young Tech players took a step forward in their development, particularly the Florida pair of King and Conner.

Poor First Half Fundamentals in the Run Game

Despite the increased emphasis by the offensive line on down hill running and more physicality, execution errors and poor reads continued to hamper Tech.

Boundary corner Travis Blackshear (No. 11) blitzes. Right tackle Silas Dzansi works to seal the B-gap in between him and right guard Doug Nester. Dzansi uses the hinge block technique instead of a scoop.

The hinge technique requires the backside offensive tackle to step inside and then give ground to his outside. The technique is meant to draw the defensive end, undersized FCS All-American candidate Adrian Hope (No. 81), up the field, similar to a draw. However, it does not aggressively secure the B-gap, especially when the defender is determined to take an interior path of pursuit. The lack of aggressiveness also creates space which allows the defender to execute a leverage technique like a rip move.

Dzansi busts twice. Instead of stepping inside and turning, he simply gives ground. Dzansi also does not deliver a firm initial punch with his left hand to drive Hope up the field. Hope crosses Dzansi's face to the inside. Blackshear ends up dragging down Deshawn McClease from the backside. If Dznasi just steps hard with his left foot and cuts off the angle, neither of those defenders can make that play.

Not much else goes right with the blocking scheme. The field-side d-end, Jonah Tibbs (No. 94), appears aligned inside eye of tight end James Mitchell. Mitchell chooses to block down on Tibbs, rather than making a potential call to adjust the scheme and have Nester kick Tibbs out as he pulls around. In that scenario, Mitchell could climb to the field-side linebacker, Braden Gilby (No. 43). Instead, Mitchell gets completely stonewalled by Tibbs. Nester ends up picking up Tibbs, and Gilby is left unaccounted for and is in a position to make the tackle. Mitchell and Dzansi earn poor marks on this play.