Analyzing the Blue Devils's five-wide adjustment, Hokies' run game ineptitude, the downturn and why a quarterback change might not be a cure all. 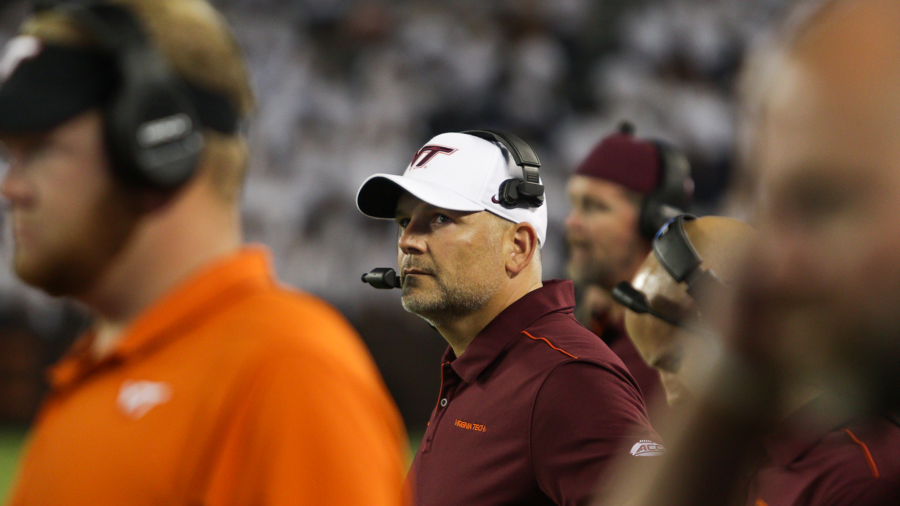 Virginia Tech football reached a nadir. On national television, the Hokies delivered their worst overall performance since 1991, when I started regularly watching. They looked outmatched physically. The looked like they had a poor game plan. Brad Cornelsen called jet sweep after jet sweep even as Duke repeatedly rolled defenders to over-pursue against the motion. Ryan Willis barely challenged Duke vertically despite the Blue Devils playing variations of press man and Cover 4 which were tailor made to attack with vertical routes, despite three previous performances where Cornelsen called verticals into three deep zones with no success. Bud Foster incorporated two deep and three deep man under coverages that Duke, particularly tight end Noah Gray, picked apart underneath. Special teams were abysmal, especially in the return game. Nothing about Friday night made me feel good about the future of Justin Fuente's tenure in Blacksburg.

Perhaps more disturbing was the lack of fight in the team. At the first sign of adversity, any swagger and competitiveness seemed to die. The Hokies collectively appeared to play in slow motion, looking for someone, anyone else, to make a play.

Initially, the Blue Devils ran their traditional inside zone read game and mixed in a smattering of triple option. Tech's defense executed soundly and defeated blocks to make plays.

Duke attempts to reach defensive tackle Dashawn Crawford and defensive end Emmanuel Belmar. Belmar extends his arms into left tackle Casey Holman (No. 78), and then swims across Holman's arms with his left hand to shake free. Right guard Rakavius Chambers (No. 67) tries to cut Crawford. Crawford bench presses Chambers into the ground and keeps his hips and feet clear of the cut block, scrapes across, and meets with Belmar to plant quarterback Quentin Harris (No. 18).

Great Foster defenses did not only feature the free hitter making the tackle as designed. They had waves of defenders who could shed blocks and pursue to the football once their gap was properly fit. This is excellent work by Belmar and Crawford. Alan Tisdale also contributes by setting the edge with proper leverage to force Harris back to the inside.

After the Hokies three-and-out following Duke's first touchdown, the Blue Devils aligned in an empty set backfield. Tech responded with a two deep man under coverage and minimal rushers. It was similar to how Foster threw off the Blue Devils in the 2018 match up.

Unfortunately, the five-wide formation exposed two critical flaws with Tech's defensive personnel: 1) The lack of athleticism at safety and linebacker, and 2) The lack of an effective pass rusher. Harris identified a bad one-on-one match up with a linebacker in man under coverage against a quality receiver. If a receiver couldn't get open, Harris had room to escape the pocket. The strategy was eerily similar to how Syracuse attacked in 2016.

On this 2nd-and-6, Harris found receiver Aaron Young (No. 81) matched up against Dax Hollifield.

Running back Deon Jackson (No. 25), aligns wide to the boundary and runs off corner Jermaine Waller. Young runs vertically and then turns left into the flat. Hollifield can't keep up. Note how rover Reggie Floyd drops into the boundary deep half. This harkens back to Boston College beating Waller, Caleb Farley, and Jovonn Quillen over the top before Foster aligned the corners deeper. Floyd respects the potential deep threat so sensitively, that he comes up incredibly slow to support Hollifield on the tackle. I made a note that Floyd barely even shows up on the television screen a full six yards after the initial catch by Young. That is incredibly slow support by Floyd, coupled with Waller's complete inability to shed Jackson's block. That lack of pursuit would come back to haunt the Hokies later.

The Blue Devils methodically moved down the field with a variety of short passes against the absent underneath coverage and Harris runs out of the pocket. The frustration grew defensively and defenders started getting out of position.