VT hands an L to The U: Miami Film Review 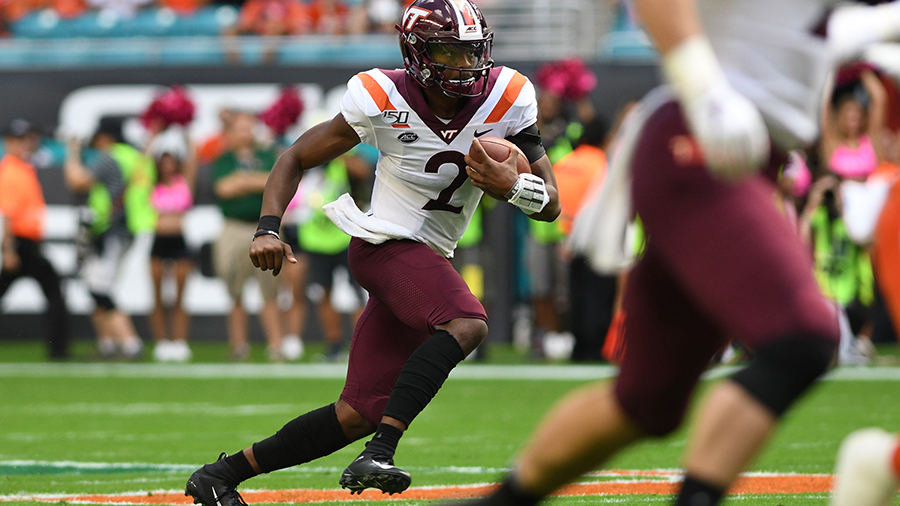 After a blowout loss to Duke and a series of uncomfortable encounters with the press, the wheels appeared to be falling off the Justin Fuente tenure in Blacksburg. Ryan Willis' inability to impact the run game sparked a quarterback change, while Bud Foster's goodbye tour continued to be spoiled by an inability to shore up the boundary side of the defense, especially against five-wide sets. Fan enthusiasm hit an even deeper nadir as many actively speculated on potential replacements for Fuente.

Awaiting the dumpster fire were the dreaded tormentors from South Florida, the University of Miami. With a defense which put up gaudy numbers over the last two seasons, The U is the kind of team which could make a bad situation worse by getting up on the scoreboard and taunting the Hokies into a frustration-filled meltdown.

Instead, Virginia Tech responded to serious adversity. Early on the secondary jumped routes like the DBU of old, forcing turnover after turnover. Maligned offensive coordinator Brad Cornelsen put enough window dressing into the game plan that an undisciplined Miami defense sucked out of position repeatedly at critical junctures. When Miami recovered and roared back, Hendon Hooker delivered a pair of beautiful deep balls to James Mitchell and Damon Hazelton to keep the Hokies ahead. An exhausted defense, holding on by its fingernails, stopped Miami twice inside the ten-yard line and preserved a victory.

Defensively, the biggest impact players were a trio of young defensive backs. A perceived weakness ahead of the season, whip Chamarri Conner, corner Caleb Farley, and corner Jermaine Waller adopted a much more aggressive posture in the first half than I noticed all season. All three aligned much tighter to the line of scrimmage and trusted their man leverage technique, and it paid immediate dividends.

On the initial third down to open the ball game, Waller and Conner aligned up tight to the line of scrimmage.

Conner plays inside leverage opposite slot receiver Mike Harley (No. 3). Waller plays outside leverage technique against split end Jeff Thomas (No. 4). Despite the different approach, they both employ the same fundamentals. At the snap, Conner opens his shoulders to the sideline. He tries to invite Harley to release outside (he can pass him off to Waller if the receivers cross). Conner looks at Harley, and he knows that if Harley turns his shoulders inside, the ball will come quickly. When Harley starts to turn his shoulders, Conner plants and jumps the route. Conner closes two yards and beats Harley to the football.

Waller benefits with the interception in part because he got a similar jump on the same route from Thomas. Waller immediately opens his shoulders to the middle of the field and looks at Thomas and the quarterback. Thomas hesitates and then brakes to the inside, which slows Waller's initial step. But, he remains in good position to work through Thomas' inside shoulder if the pass comes. Conner deflects the ball and Waller, because of his good jump on Thomas' break, arrives in perfect position to show off his ball skills and haul in the interception.

Farley invites an outside release and then turns and runs with receiver Dee Wiggins (No. 8). When the camera comes back to Farley, his technique is perfect. Farley's outside (right) hip is on Wiggins' inside leg, maintaining inside leverage. Farley's head is already back and looking for the football. Farley uses the body contact to feel Wiggins while actively looking for the football to ensure that he doesn't get flagged for pass interference. This is a beautiful interception.

The abysmal television crew lead viewers to believe turnovers were the biggest catalyst for the Hokies' early lead. In reality, the Hurricanes' defense, statistically one of the best in the country (SP+ No. 31), displayed some absolutely mind-numbing defensive strategies. Those early decisions played right into Cornelsen's preferences. Twice on third down on the opening drive, the Hurricanes played a press man cover one coverage with a four-man rush and a single linebacker to account for first time starter Hendon Hooker. On both plays, defensive coordinator Blake Baker schemed his linebacker out of position, which was remarkably stupid given: A) All of Hooker's playmaking on film is with his legs, and B) Cornelsen loves to run a single read vertical quarterback lead draw combination on third down.

On the above 3rd-and-5, Shaq Quarterman (No. 55) abandons the middle and sinks well past the first down marker. He fails to not only to account for Hooker, but also not mark Deshawn McClease leaving the backfield.

Hooker gets the first down before Quarterman even moves back towards the line of scrimmage. Lecitus Smith picks up the stunt nicely. He passes off DT Pat Bethel (No. 93) to the combination of center Bryan Hudson and right guard Doug Nester. When DT Jaelan Phillips (No. 95) loops over to Smith's A-gap, Smith has his eyes up, makes contact with Phillips' right shoulder, and invites Phillips to widen out to the B-gap. Smith doesn't have to overwhelm Phillips with power. Smith uses a solid base, great balance and recognition, and the appropriate contact point to let Phillips run himself out of the play.

Later in the drive, Miami used the same defensive look on another third-and-long. This time, senior linebacker Michael Pinckney (No. 56) fell victim to the most classic blunder besides entering a land war in Southeast Asia.

Pinckney should mark McClease and fill into whatever bubble he exits. Instead, Pinckney seems to ignore McClease and delays. He floats over to the right where three other Miami defenders have Hooker walled in. Hooker has nobody in between him and the goal line except McClease.

Nester has a ton of potential, but still needs to improve his footwork. On the touchdown, Nester's technique makes life even easier for Hooker. Nester takes an aggressive step to his right as he shows pass pro. Nester then drops his left foot deep to the inside. That action further invites defensive tackle Jonathan Ford (No. 96) to the inside.

Once Ford slips inside, it is clear sailing for Hooker. Miami schemed in a way that made Hooker very comfortable early in the game.