Sticking It In: Virginia Tech vs North Carolina Film Review

Break down of early Virginia Tech defensive gaffes, a well conceived and executed screen series, and a "Manball" mashing from the Hokies' offensive line and tight ends. 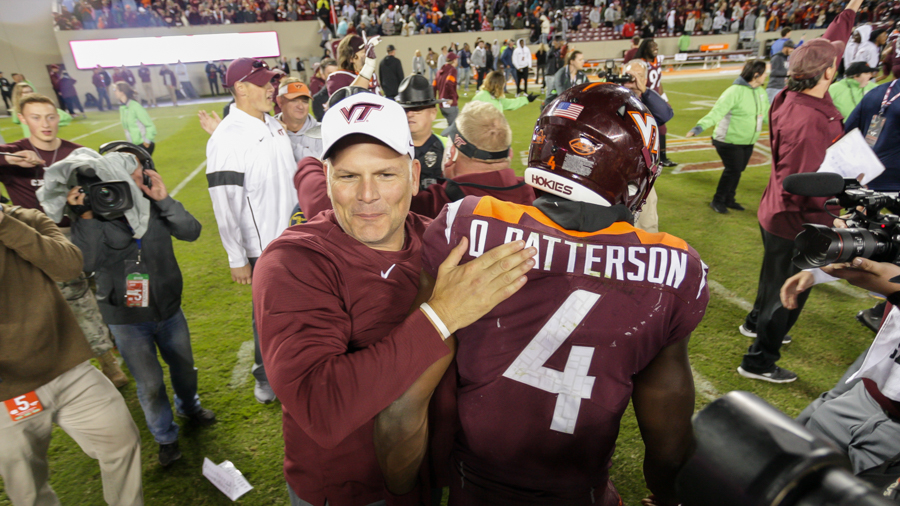 With Virginia Tech down 10-0, I have to admit I thought it was the end of the Justin Fuente era. North Carolina's offense had dominated early, and I didn't believe its contemporaries could execute well enough to win in a shootout. Three quarterbacks and six overtimes later, the Hokies stuck it in just enough to pull out a thrilling homecoming victory.

While there were numerous standout performances, (including Hendon Hooker, Quincy Patterson II, Tré Turner, Damon Hazelton, and Caleb Farley), the Hokies' offensive and defensive lines played significantly better than their UNC counterparts. Ranging from freshmen taking a huge step forward, to underperforming veterans stepping up, the Hokies threw body blow after body blow to change the momentum of the game. Fuente was rewarded with a timely and emotional victory. Now, with a trip to the hallowed grounds of Notre Dame on deck, the Hokies can feel good and get healthy during their bye week.

Defensive Miscues with Scheme and Execution

The outcome early seemed much more in doubt due in large part to a number of major assignment miscues from the Virginia Tech defense. UNC offensive coordinator Phil Longo employed a diverse mix of formations and counters to cause a variety of matchup issues for the Hokies. Primarily, Longo's goal was to isolate slot receiver Dazz Newsome and his tight ends against Chamarri Conner, Rayshard Ashby, Dax Hollifield, and Devon Hunter.

This 2nd-and-7 deep shot is an example of a clever formation which fortunately didn't burn the Hokies. Right tackle Jordan Tucker (No. 74) flexed out wide to the boundary along with wide receiver Beau Corrales (No. 15). Left tackle Charlie Heck (No. 67) flipped over to the right side. That left, left guard Ed Montilus (No. 63) and tight end Garrett Walston (No. 84) to the back-side. Three wide receivers aligned to the field-side all flexed off the line of scrimmage wide of Walston. Even though Walston aligned like an offensive tackle, he was eligible. Meanwhile, Tucker was not even though he was out wide.

The Hokies play man coverage to the boundary. Devon Hunter accounts for Tucker. Jermaine Waller, Conner, and Divine Deablo cover man against the three eligible field-side wide receivers. The design isolated Ashby one-on-one with Walston. To Ashby's credit, at least he recognizes that Walston is eligible and tries to run with him. However, Alston works open against a favorable matchup and Hunter strays out of position, unable to help Ashby.

Similar problems plagued Tech's defense against a strong looking counter trey concept that Longo dialed up repeatedly in the first half.