By the (Advanced) Numbers: Fighting the Irish

Virginia Tech must limit Notre Dame possessions and not give them free ones by way of three-and-outs.

In its six overtime thriller against North Carolina, two Virginia Tech plays stood out to me at opposite ends of the aggressiveness spectrum.

With 6:25 to go in the 4th quarter and a 24-24 tie, the Hokies faced 4th-and-2 at essentially midfield. Tech had only scored 3 points since Quincy Patterson had taken over at quarterback, and it certainly didn't feel like Virginia Tech had momentum. Rather than try for two yards with a run-capable QB, Tech opted to punt. Three plays and 1:06 later, the Tar Heels scored a touchdown and took the lead.

Then later in the second OT, the Hokies found themselves down 7 and faced a 4th-and-3 from the 18-yard-line. Rather than trying to grind out 3 yards up the middle or opting for some other "safe" play, an end zone pass to Hazleton was called. The throw was a dime, and the one-handed catch — while being held by the DB — was incredible. The rest is Hokie history.

Many sports data analysts have made a big deal about the conservative play calling most coaches employ when facing fourth down. Two notable examples are Bill Connelly and The New York Times. While their broader point — teams should go for it on 4th down far more often than they do — is likely still quite valid, the analysis is heavily flawed.

The data used to back up this assertion is based on historical data of teams' success rate converting on 4th down. But that data isn't some controlled experiment. It consists of 4th down plays in which the coach opted to go for it, and thus contains heavy bias towards games and situations when the coaches were most confident they would make it, were forced to play aggressively, or had no other choice. Using that data to make claims about what a specific team should do against a specific other team is faulty and dangerous. Just because Alabama might decide to go for it on 4th-and-1 against Troy State at midfield doesn't necessarily mean Virginia Tech should against North Carolina. The odds are quite different, and the one-size-fits-all models based on data that only came from coaches who opted to go for it are not particularly accurate. Simply put, there is a huge fundamental difference between the odds of a random team making it on 4th down and the odds of teams that chose to go for it making it.

That said, coaches should be more aggressive on 4th generally, and while the overtime play two weeks ago wasn't by choice (the team would lose by not going for it) the outcomes of each play highlight this point.

Now, here's to figuring out if Virginia Tech has a chance to make a meaningful 4th-down decision against Notre Dame late in the game or whether the scoreboard will render such a decision futile.

Virginia Tech is currently 5-2. The actual and predicted score difference and odds of winning each game are: 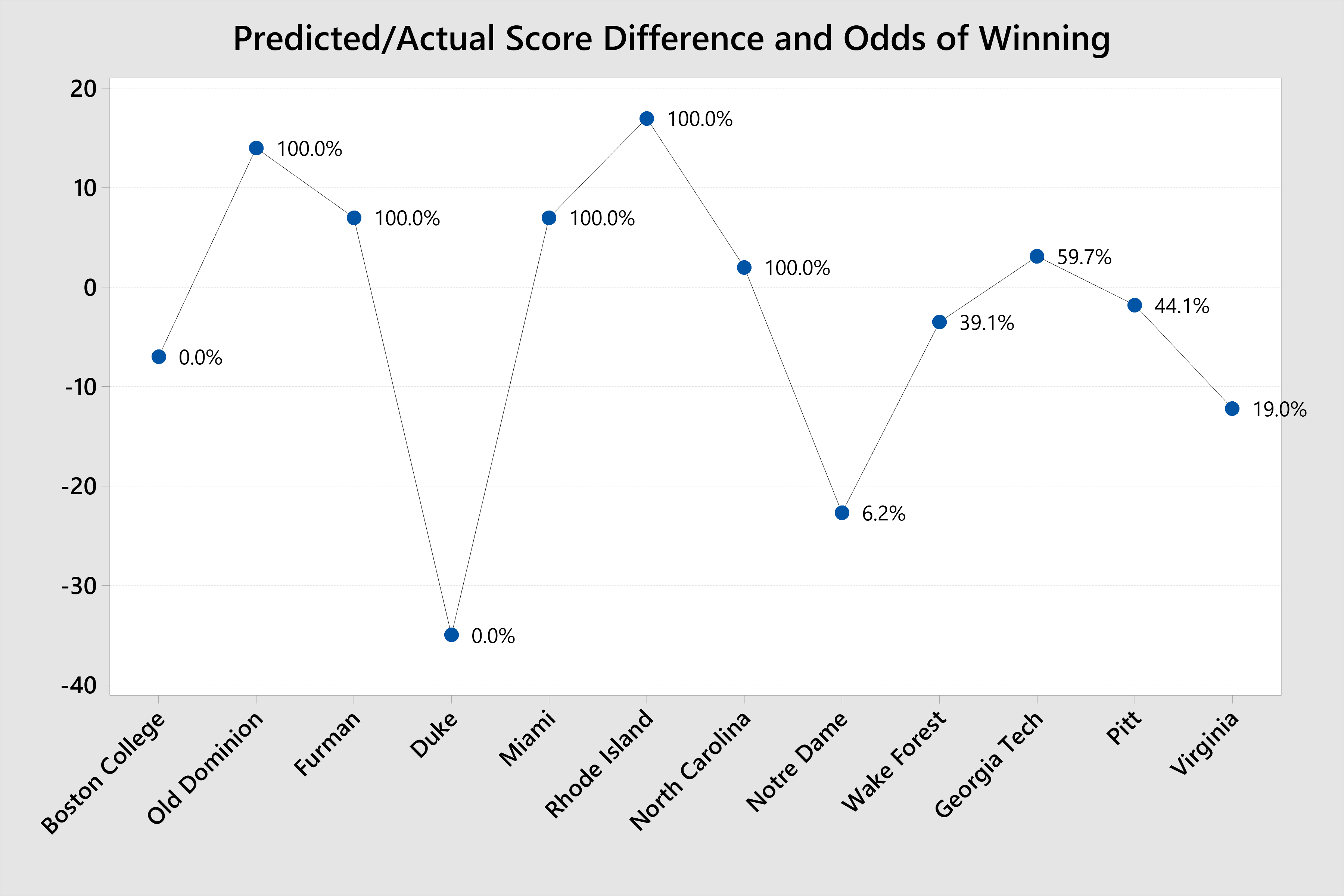