Saturday's game against Notre Dame means nothing. But it could show us almost everything. 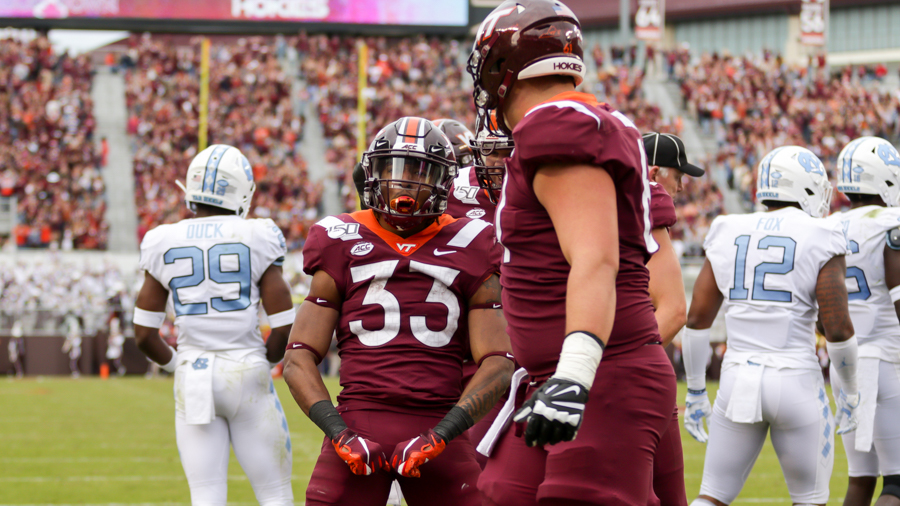 There was a time in my life when I knew Virginia Tech football could win the national title.

It was between 1999 and 2003, arguably the program's peak. The Hokies reached the top five in 30 different weeks during those five seasons, produced 17 All-Americans, and boasted the most NFL talent Blacksburg's ever seen on the field at once. They dominated opponents, and not just the sacrificial squads from the bottom of the Big East. Tech beat the hell out of true, glorified blue bloods, with players who could do this on one side of the ball:

And this on the other:

In 2002 Frank Beamer and Bud Foster gave Nick Saban and #14 LSU that work, and then preceded to rip off wins against #16 Marshall (a 47-21 ass beating in which the Hokies led 40-7 and Lee Suggs and Kevin Jones combined for — checks notes, blinks, blinks again, looks around to make sure this is still a reality and not a dream-like state — 324 YARDS AND FIVE TOUCHDOWNS) and #19 Texas A&M in College Station.

The the runs in '95 and '99 get a lot of love, as do the '05-'07 seasons (commonly known around these parts as the Lost Stinespring Years™.) But '99 to '03 was the height of the program from both a talent and national recognition standpoint. They were recognized by the polls, by national media (Tech was part of the College GameDay matchup five times), and by their opponents.

The one thing that makes most of those squads so complicated is they never lived up to their potential. Grant Noel short-circuited in back-to-back losses to unranked Syracuse and Pittsburgh in '01. Bryan Randall took the reins from Noel in 2002 and sparked an 8-0 start. Then the wheels fell off, and they lost four of their last five. Randall and Marcus Vick split snaps in '03, a season with towering highs (6-0 start, a 31-7 win over #2 Miami) and backbreaking lows (a 28-7 loss at West Virginia, winners of only two of their final seven, and the unfortunate distinction as the most recent Tech team to lose to Virginia.)

Two things each of those iterations of Hokie football had in common? They may have disappointed, but they were never overmatched. Tech choked away games against lesser opponents, squads who geared up to play one of the best teams on their schedule, but they never laid down against other top foes.

The Hokies won four times against schools ranked in the top-25, and gave legendary Miami squads problems in '01 and '02 before beating them in '03. Though no one could match the NFL talent stacked on the Hurricanes' roster, Tech kept them closer than anyone else. Beamer and company may have not lived up to their potential, but they were never outclassed on the field by a blue blood.

I've always loved when Tech faces off against a powerhouse. Not because of a naive anticipation of a win, but because there's no better way to see how close they are to the big picture college football conversation. I like to call those games — the ones against thoroughbred programs like the Butch Davis/Larry Coker era at Miami, Saban-lead LSUs and Alabamas, and more recently Dabo's dynasty at Clemson — gut checks.