Touchdown Jesus visited the Proctologist and Found a Horseshoe 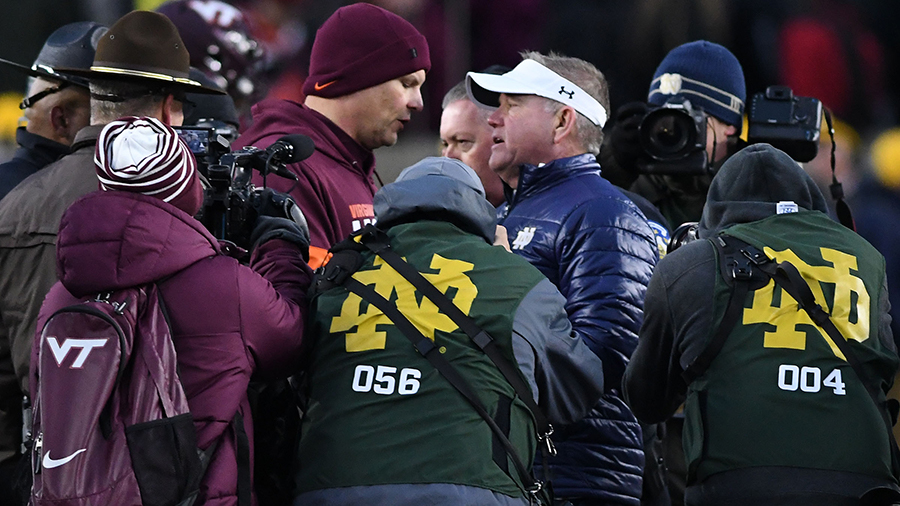 This one hurts. Virginia Tech visited the hallowed grounds of Notre Dame Stadium and delivered a physical, emotional, and imperfect performance that showed tremendous fight and promise. For three-and-a-half quarters, Bud Foster's defense baited the quarterback and forced turnovers like the Lunchpail defenders of yesteryear. While offensively, Quincy Patterson made enough throws and delivered enough body punches to provide Foster's crew a six-point lead with only 3:22 on the clock. After overcoming brutal officiating and a limited offensive scheme, the Hokies were on the verge of becoming the first underdog ACC opponent to beat the Irish at home since Notre Dame's bizarre arrangement with the ACC was conceived.

At that moment, whether it was the ghosts of Touchdown Jesus, or the simple physics of an exhausted defensive front coupled with Tech missing its two top corners for parts of the final drive, Notre Dame dinked and dunked their way into position to set up Ian Book's game winning touchdown run. The longstanding inability of the linebackers and safeties to cover — they get lost in zones and can't stick in man — allowed Book the comfort to find breakdowns in coverage and hit his big wide receivers for crucial fourth down conversions twice on the climatic drive. Instead of adulation, the Hokies face more questions. Was Notre Dame overrated? Did a poor outing by Book and constant one-on-one coverage gift wrap a golden opportunity for a signature road win? Or did the Hokies go toe-to-toe with a solid opponent well above their weight class, and show growth and maturity that will lead to a big positive shift in the program's trajectory?

Anyone who is affirmative in either direction is selling you something. Tech's offensive and defensive lines were not on par with Notre Dame, but both groups fought their guts out. The o-line was physical and aggressive. The d-line was fast and nasty. Rayshard Ashby was a wrecking ball when kept clean. Reggie Floyd delivered his best game of the season. Caleb Farley and Jermaine Waller chalked up good performances. Khalil Ladler clocked his second consecutive solid game. Dalton Keene and Nick Gallo brought the wood blocking. And Divine Deablo would have been remembered in legend if his 98-yard touchdown return had been in a winning effort.

Still, it wasn't the all-around effort across the board that I saw against UNC. The wide receiver corps didn't make enough plays against one-on-one coverage when Notre Dame dared Patterson to beat them through the air. The receivers' blocking took a major step backwards in the first half. Patterson was shaky in his first start both throwing the ball and managing the mechanics and reads in the run game. Linebackers and safeties continued to struggle in coverage even though the Irish didn't have a dangerous deep threat. There are a ton of opportunities for improvement. The best takeaway is that the Hokies responded to adversity and fought back with tenacity even when the ghosts of Notre Dame, especially those in stripes, seemed to conspire to take away their hard earned fruits. After the fiasco against Duke, and the inept showings in non-conference play, this performance leaves me cautious, yet hopeful.

During the first half defensive communication regressed when compared against North Carolina. Notre Dame had success targeting their big tight ends against Tech's linebackers and safeties via play-action. Despite the inability to run the ball consistently, Notre Dame's persistent commitment to the run game created and took advantage of the Hokies' confusion. Notre Dame's opening touchdown reflected some of those issues.

H-Back Cole Kmet (No. 84) releases opposite the run fake and runs a simple Y-dump. Given the man coverage, either Ashby or Deablo are responsible for Kmet. As the play commences, the front turns into a six-man wall. Dax Hollifield angles over to fill the B-gap to the field-side, Jaylen Griffin forces in the C-gap, and Ashby runs free in the alley in between Griffin and Hollifield. I believe Deablo should have man against Kmet.

However, Griffin may account for some of the blame. He didn't do a good job of widening in a contain position, leaving Deablo in a difficult position if he has to read any keys. If Kmet releases wide, or tries to seal Deablo inside on a quarterback keeper off the read option action, Book could keep the ball running left. Griffin was in poor position to contain that run. I think Deablo tried to do a bit too much, and Griffin's poor contain hung Deablo out to dry a bit.

Deablo was caught in a similar position on the game winning touchdown. The Hokies aligned in their 30 package. However, with Farley sidelined due to injury and Waller removed from the game for a dubious targeting call, Tech rolled a bit of a patchwork lineup. Ladler played the Anthony Shegog role as a boundary version of a whip, with Jovonn Quillen aligned behind him at corner. To the field-side, Floyd, Chamarri Conner and Armani Chatman played Cover 4 against the trips formation. Deablo was the extra alley defender.